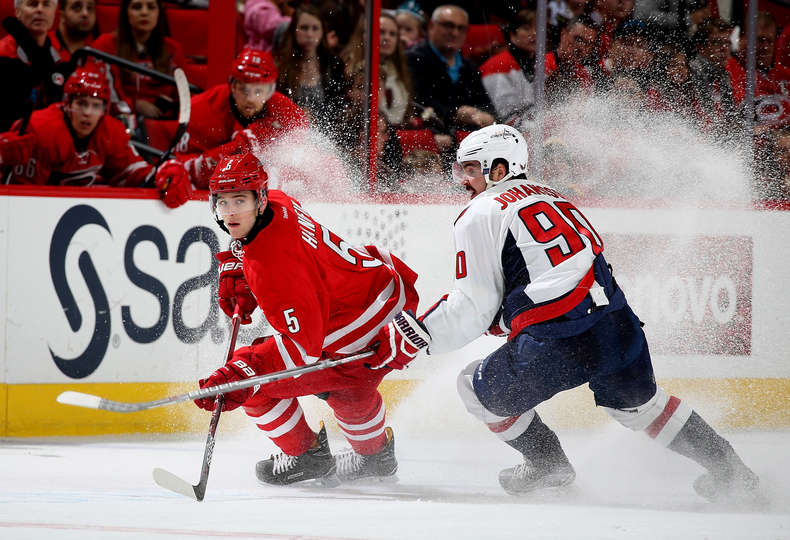 With 10 seconds remaining in overtime, Washington goalie Philipp Grubauer made several blocker pad saves to send the game into a shootout.

During their last contest in Raleigh, North Carolina 34 days ago, the Capitals allowed 37 shots on goal in 5-1 loss. Grubauer was able to save 33 of those 37 shots. On Friday night, Grubauer saved 27 of Carolina’s 30 shots on goal.

Grubauer stopped the Hurricanes first shot in the shootout.

The Capitals sent forward T.J. Oshie to take their first shot. He slowly weaved his way down the ice and deked Carolina goalie Cam Ward to score Washington’s first goal of the shootout.

“He makes it look way too easy,” Capitals head coach Barry Trotz said, according to The Washington post.

In his losing effort, Ward saved 23 of 26 shots on the night.

Carolina defenseman Jaccob Slavin missed the team’s next shot, bouncing it off the goal post.

Then, Washington forward Evgeny Kuznetsov scored on a backhand shot to seal the Capitals’ victory.

“I thought both teams had a lot of good chances,” Hurricanes Head coach Bill Peters said, per The Associated Press. “It wasn’t for a lack of chances for us. … I liked the effort, I really did.”

Washington trailed 3-2 for most of the third period after Carolina forward Teuvo Teravainen redirected teammate Sebastian Aho’s shot for a power-play goal.

Teravainen had a two-point night, as he also assisted defenseman Justin Faulk’s game-tying second-period goal. Aho added an assist on the play as well, earning him the first of his two points of the game.

Oshie later redirected Capitals defenseman Dmitry Orlov’s shot for a goal, tying the game at three with 6:04 remaining in regulation.

“… you tip them and hope they get a good bounce,” Oshie said, according to the AP. “And I got a fortunate one.”

“[Oshie is] a big part of our team. There’s no question,” Trotz added, per The Washington Post. “Just what he brings to the team all over, energy and just his personality and all that.”

The Capitals fell behind six minutes into the game with Hurricanes forward Jeff Skinner’s 12th goal of the season. Skinner swiped a rebound past Grubauer to put Carolina ahead 1-0.

Washington countered at the 6:25 mark of the second period when Capitals forward Alex Ovechkin tied the game at one with a power-play goal.

Washington has scored 13 goals with a man advantage in its last 14 contests. Since Dec. 1, the Capitals have moved from 24th in the NHL to 13th in power-play scoring percentage.

Washington improved to 19-7-3 but maintained its fourth-place spot in the Metropolitan Division. Despite winning their sixth in a row, the Capitals still sit one point behind the Columbus Blue Jackets who have won eight straight games. The Philadelphia Flyers have as many points as the Capitals and are winners of 10 straight, but they still sit in fifth place.

The Capitals will travel back to Verizon Center to face the Montreal Canadiens Saturday night.

The Hurricanes will host the Buffalo Sabres Saturday night.