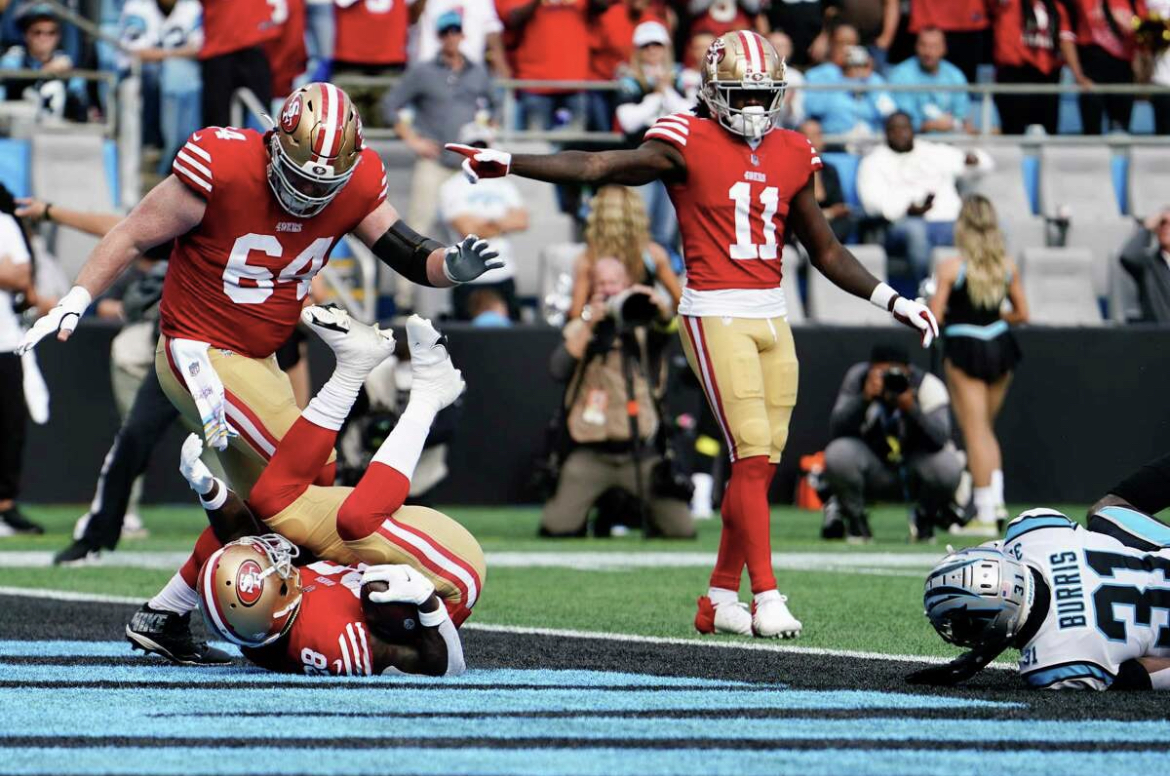 Everyone knew it would be a tall order for the Carolina Panthers when they hosted the San Francisco 49ers on Sunday. The Panthers have struggled mightily on the offensive side of the ball and it didn’t make it any better that the Niners boast the best offense in the NFL. The silver lining of the season has been the defense, but that took a blow when the team lost safety Jeremy Chinn to a hamstring injury. He was moved to Injured Reserve and expected to miss at least the next four weeks. Ahead of Sunday’s game, it was announced that linebacker Frankie Luvu and safety Xavier Woods would miss the day’s contest with injuries. That’s three starters out and an offense ranked dead last in the league; the odds were not that great.

San Francisco got started with a bang, capping a 7-play drive with a 9 yard touchdown reception by Tevin Coleman on the opening drive. Carolina went three-and-out on their first possession but got a boost from the defense when a hit from Damien Wilson on tight end George Kittle popped the ball loose and Yetur Gross-Matos recovered for the Panthers. However, Carolina could not capitalize when Eddy Pineiro missed his first field goal of the season – a 41 yarder. The first quarter ended with the Panthers down 7.

A 49-yard field goal by San Franciso kicker Robbie Gould pushed the lead to 10 early in the second quarter before Carolina answered with a field goal of their own to crack the scoreboard. Trailing 10-3 with 7:59 left in the half, the Panthers avoided a larger deficit when Gross-Matos blocked a 43-yard field goal attempt. The excitement was short-lived as Baker Mayfield was intercepted four plays later by Emmanuel Moseley, who raced 41 yards for the score.  At the half, the Niners led the Panthers 17-3. 17 is a sobering number for Carolina head coach Matt Rhule is 1-26 when the opposing team scores 17 or more points.

Things started to look up in the third quarter – well, kinda. The Panthers scored on both of their offensive possessions – one a 19 yard scamper by Christian McCaffrey, the other a 37-yard field goal by Pineiro. The problem is, the Niners added two touchdowns on their two offensive possessions as well. Carolina’s decision to attempt a 2-point conversion after the McCaffrey touchdown was a head scratcher. It was early in the third quarter and they were down 8 points. Nevertheless, the Panthers entered the fourth quarter down 24-12. The Niners’ next drive was resuscitated on fourth down as Carolina cornerback CJ Henderson was flagged for a costly pass interference. A few plays later, Jeff Wilson punched it in from one yard out to grow the lead to 30-12 with 12:31 to play. A failed 2-point conversion attempt kept it there. Pineiro’s 34 yard field goal trimmed the lead to 15 with 6:51 to play.

The Panthers would get no closer as Coleman added another score, this one from five yards out to push the lead to 37-15 with 3:20 left. PJ Walker went in at quarterback for the Panthers’ next offensive series. Mayfield finished 20-of-36 for 215 yards and one interception; his rating was a 61.7. Jimmy Garoppolo finished 18-of-c30 for 253 yards, two touchdowns, and a rating of 109.4. The loss drops Carolina to 1-4 as they prepare to travel to the West Coast to face the Los Angeles Rams. The Niners improve to 3-2.