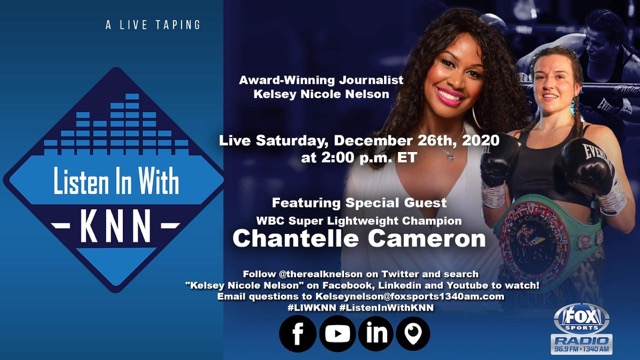 On the latest episode of Listen In With KNN on Fox Sports 1340AM, host Kelsey Nicole Nelson welcomed WBC Super Lightweight World Champion Chantelle Cameron to the show.

She grew up in Northampton, United Kingdom where she witnessed her local park taken down and weren’t any youth clubs. Instead of playing sports like football, basketball and netball, Cameron fought with kids all the time until she got into martial arts to get some discipline.

“I’ve always been really competitive no matter who’s in front of me. I knew I had to win and I was a bad loser. That’s been my inspiration for the fact that I can’t take losing. My parents have always been very supportive and nobody can beat me,” she said. “It was born in me and that’s helped me in my career.”

As a result of her fighting skills, Cameron started her career as a kickboxer before switching to boxing in 2010. However, the change was a lot harder than she had anticipated. It took Cameron six months to master her boxing skills as she worked on her hands and footwork. Through all of that, she was grateful to have a boxing coach that was patient with her.

“If he’s seeing something that I wasn’t doing right, he would always pick up on it. I’m grateful because it’s done me the world of good and he would not leave me alone until I started doing what he wanted. My coach being such a perfectionist made me get rid of my bad habits,” Cameron said.

When she first got into boxing, she was the only female and had doubters who thought she shouldn’t be boxing. But Cameron worked hard to earn the respect of her male counterparts.

“Whatever they did, I’ll do the exact same and I kept up. They never expected me to be a girl to be moaning and making excuses. Even when I was sparring with them, they had to respect me because I had beaten them up,” she said.

Cameron started off her boxing career competing in over 100 amateur fights while she was on team GB for eight years. Despite facing some bumps in the road as an amateur, she gained experience by boxing across the world.

“In the professional ranks, it is a matter of what star I’m coming against because I’m used to boxing so many different styles in tournaments. In tournaments, you can have 3-5 fights to get to the Gold Medal and you have to adapt as quickly as you can because you didn’t have time to study and prepare for them. You’re boxing the best against the best,” said Cameron.

Recently, she won her first world title by defeating Adriana Dos Santos Araújo in a unanimous victory. Cameron knew a year before that she would have a shot at a world title. However, it almost didn’t happen due to the COVID-19 pandemic. Before the fight, Cameron was nervous because she never met Araújo outside of amateurs but she prepared herself for the big fight.

“I remember watching her a few times and she was aggressive and a big puncher. I was expecting the fight to be a lot harder than it was. I remember in the ring thinking, ‘I don’t think she wants to be here.’ It was an easy fight,” she said.

“If it’s what you want and what your dreams set to, you just gotta take the highs and lows. Just dig deep, stand back up and go again because it will all work out in the end.”