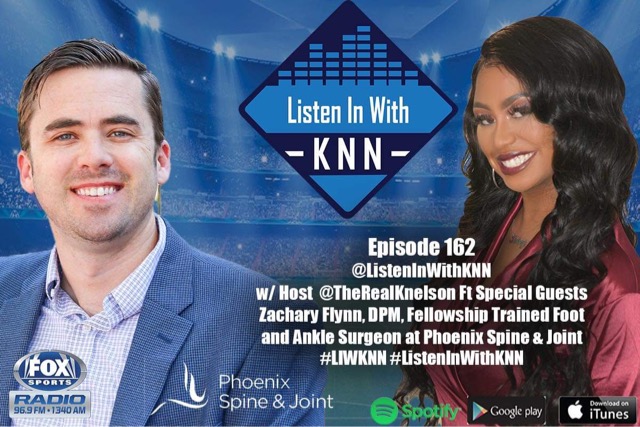 Flynn has always had an affinity with feet and ankles as he grew up in Phoenix, Arizona. As a Catholic School kid, he was required to do a lot of community service. During that time, Flynn became a multi-sport athlete and suffered a number of injuries while playing. As a result of those injuries, he got into the orthopedic field where he spent time observing Hand, Foot and Ankle surgeons.

“The foot and ankle surgery aspect of it just captured me because I realized not only the diversity of injuries that can happen to the foot or ankle but also the complexity of it. I always joked that I had to be a doctor and also a part time engineer in order to get a good outcome because it’s that complex. That challenging complexity motivated me further to become the best I could be,” Dr. Flynn said. “I wanted to help the community and patients get them good care.”

However, the foot injury that sticks out the most to him is the Achilles injury because it’s one of the most difficult injuries to come back from. Recently, Golden State Warriors star Klay Thompson suffered a torn right Achilles injury while playing pick-up basketball and is out for the 2020-21 NBA season. Thompson was recovering from a torn ACL that he suffered in the 2019 NBA Finals and missed all of last year.

“Historically, it’s not a super common injury but the list of players that have sustained this injury and then their return to the game has not always been obstacle free. I really feel for Klay because coming back from an Achilles injury is a long road all in itself and had to piggyback that off the ACL injury. He’s a young, healthy and active guy and is quite the talent. Hopefully, he comes back as good as he once was,” he said.

Typically, the recovery process for an Achilles tear takes about 10 months. For athletes like Thompson, he will be mobilized in a splint for about 2-3 weeks until those stitches can come out after surgery. Then, he would go into physical therapy for about 3-5 times a week with multi-hour sessions.

“The biggest thing with any type of tendon injury is that early passive range of motion is what engages that musculotendon complex and gets that tendon fired again. He’s motivated to come off that ACL and Achilles injury but he’s coming back to a super competitive team and has his other Splash Brother (Stephen Curry),” said Dr. Flynn. “For him, it’s going to be a struggle and that’s where it takes that 10 months.

Traditionally, an Achilles tendon rupture for most patients and athletes feels like getting kicked in the back of the legs. NBA greats like Dominique Wilkins and Isiah Thomas had suffered this injury and were never the same.

“They’re physically trained but every athlete always struggles with the emotion and the mental aspect. The second you have that injury, you meet with your orthopedic surgeon or foot and ankle specialist and they tell you it’s going to be 10 months before you feel normal again. That’s when it really hits them because they have to spend all this time rehabbing to get back on to the court,” he said.

Dr. Flynn advises athletes to take care of their bodies in order to prevent these types of serious injuries.

“What you put into your body is what you’re going to get out of your body. A lot of it can tie into biomedical imbalance in the body. When you look at lower extremity injuries from an Achilles tendon to hamstring pulls to lower back strains, it can come from anywhere in the chain. If this athlete has been compensating for years, then it’s only a matter of time before it breaks.”