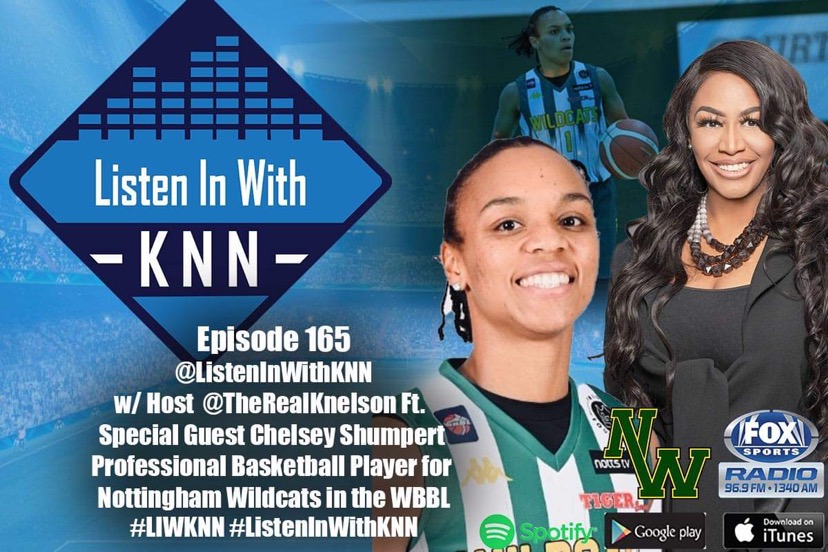 On the 165th episode of Listen In With KNN on Fox Sports 1340AM, host Kelsey Nicole Nelson welcomed Nottingham Wildcats basketball player Chelsey Shumpert of the Women’s British Basketball League (WBBL) to the show.

The Kentucky native fell in love with the game of basketball when she was about five years old. Her sisters also played and had some family members play in the professional ranks. Shumpert had big dreams of playing professionally as well and had a number of scholarships while in high school before getting hurt in her junior year. But luck came her way as the University of Tennessee took a chance on the five foot five guard.

“While I was there, I had a Hall of Fame coach in Jim Foster and he made me work hard and lead from the beginning even as a freshman. That definitely pays off to who I am and what I can do now. Chattanooga was great with experiences and people. College gave me confidence to build and have a great professional career no matter what size I was and where I came from,” Shumpert said.

While at Chattanooga, she led the team to three consecutive SEC conference championships and a 25 game winning streak. Shumpert made first team All-Conference twice and second team All-Conference once. After her three year stint at Tennessee was over, she transferred to Division II Union University as a graduate student for one year. In the 2017-18 season, Shumpert had the best season in school history when she averaged 24 points per game and shot 38 percent from three point range.

“Union is a Christian-based school and it challenged my beliefs and a lot of things. There were people that were in my circle and team that I could trust. Going forward with that, it inspired me to work harder in the court and God allowed me to show my talents even more than I was before,” she said. “That’s why I would consider that literally the best year of my life.”

Shumpert took her talents overseas to play for the Nottingham Wildcats of the Women’s British Basketball League. With her drive and motivation, she has become one of the most dominant players in the WBBL as she enters her third season with the club.

“I just felt like it was an opportunity and I got to do these types of things. I just wanted to be not only a basketball player but a good person. The fans and community always notice you and show you crazy love,” said Shumpert.

Being on the Wildcats has given her so many experiences on and off the court. Shumpert is grateful for her coaches and teammates who push her to be the best player that she can be.

“I’m just glad to be in a country where I can keep improving and making everyone around me better. Just being a leader, they encourage me to lead the team and that confidence and trust in me in itself makes me a better player. That’s why you see me competing at a high level and can do the things that I can do with no regrets,” she said.

Shumpert hopes to be an inspiration to the next generation and advises those who want to be in her footsteps to never lose sight of their vision.

“Sometimes, we can do that just by looking at the next person and how fast their pace of life may be. But God’s going to give you your own pace and time. Live up your dreams the best that you can and the rest will follow. You’ll be successful in any way that you want to be.”