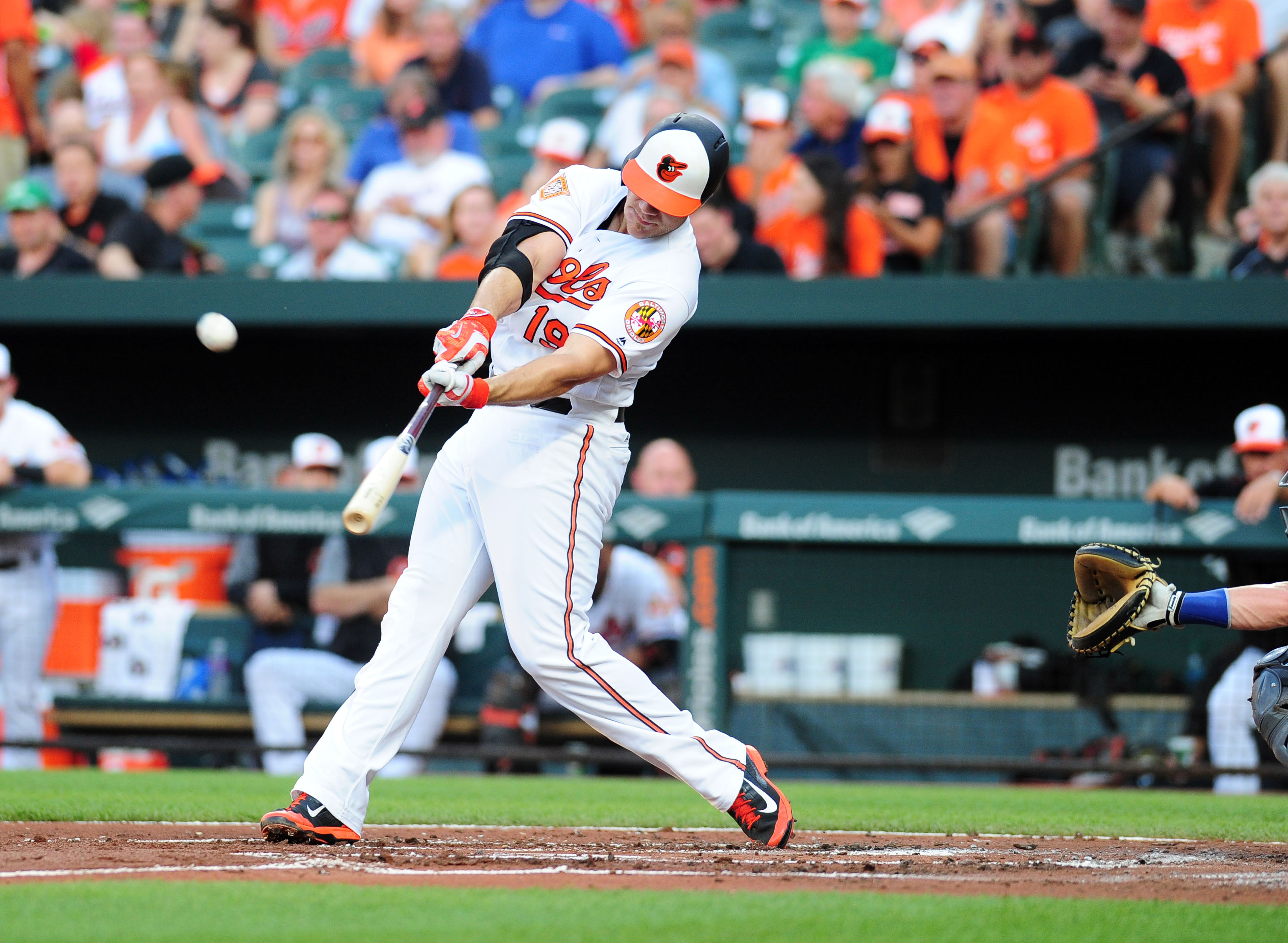 BALTIMORE – Chris Davis hit two home runs, including a grand slam, and finished with a new career-high with six RBI as the Orioles topped the Texas Rangers, 12-1, on Tuesday night.

Davis busted out of a 1-for-14 slump since coming off the disabled list following the All-Star break with the two home runs and Dylan Bundy pitched six innings of one-run baseball to give the Orioles at least a split in the four-game set with the Texas.

It only took two Bundy fastballs for the Rangers to get on the board as Shin-Soo Choo sent one into the Orioles bullpen to make it a 1-0 game. It looked to be another early lead for the opposition because of a rough start by an O’s starter.

That was not the case as the Orioles offense responded quickly with six runs in the first before Rangers starter Tyson Ross could record a single out. Adam Jones reached on a single that just missed Rangers third baseman Adrian Beltre’s glove and Manny Machado drew a walk to give Baltimore its first two base runners. Jonathan Schoop doubled to the wall to plate Jones and sliding Machado for the first two runs of the inning.

Chris Davis hammered his first homer to center field on the next pitch and a leaping Carlos Gomez helped guide the ball into the Orioles bullpen to give them a 4-1 lead in a hurry. Mark Trumbo reached on a single and Trey Mancini connected for home run No. 15 on the year to make it 6-1.

Texas threatened in the second inning by loading the bases with two outs, but Bundy escaped the jam by getting Shoo to ground out. The Rangers did not put up much of a fight the rest of the way as Bundy did not allow another runner to make it to second base.

“The first three innings I felt off. I can’t really explain what was off, but something was,” Bundy said. “That’s how you get out of it. Staying in the game, pitching. Trying to figure out what works and make adjustments.”

The Orioles made some noise of their own in the fourth with a Ruben Tejada single and Jones reaching base once again on an error. After Manny Machado struck out on a questionable strike-three call, Schoop walked to load the bases. That is when Davis came through with his second home run of the night, the grand slam to put the Orioles on top 10-1. It was the third grand slam on the year for the Orioles and the eighth in Davis’ career.

“Any time your offense has a game like tonight, I feel like everybody else can take a deep breath and not stress so much,” Davis said. “I was proud of the way everybody swung the bats tonight. We didn’t give any bats away, we stayed in there and got a positive result.”

Bundy needed 100 pitches to get through six, striking out Mike Napoli on his final pitch of the night. He allowed the one run on four hits and a walk while striking out four batters. He is now 9-8 on the season and has 13 quality starts in his 19 games. No other Orioles starter has more than five. It was also the first time the O’s have had back-to-back quality starts since June 1-2 against the Boston Red Sox.

“About as good as we could expect so I was happy with his outing,” Buck Showalter said after the game. “Two good starts we’ve gotten in a row that would certainly bode well if we can continue that pattern.”

Baltimore loaded the bases for the third time in the game in the sixth and Machado came through with an infield single to score another run. After a slow start to the season, Machado is batting .350 over his last 14 games.

Seth Smith gave the Orioles their fourth homer of the night in the eighth for the final run. The 12 runs scored is the most runs scored since scoring 15 against the St. Louis Cardinals on June 17. The 16 hits were one shy of tying a season-high for a nine-inning game.

An Orioles win tomorrow would give them their first series win since the June 27-29 series against the Toronto Blue Jays. They are still tied with those Blue Jays for last place in the American League East with a 44-49 record.

Orioles owner Peter Angelos has given Dan Duquette permission to sell, according to Ken Rosenthal.

The Colorado Rockies are reportedly interested in Bundy and Kevin Gausman. We highlight some of their top prospects.

Speaking of Gausman, he will make the start for Baltimore tomorrow, sporting a 5-7 record and 6.39 ERA. The Rangers will have left-hander Martin Perez (5-6, 4.55 ERA) take the mound in the third game of this four-game series.