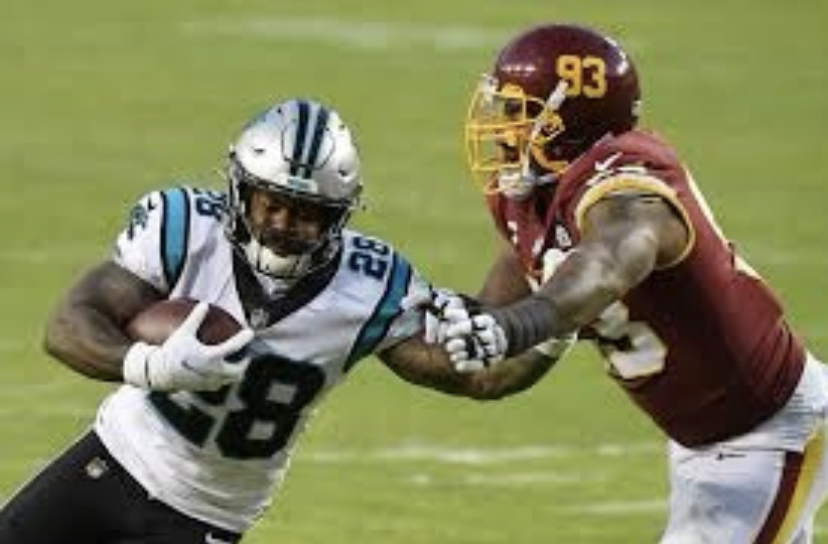 With a loss by the New York Giants, the Washington Football Team would clinch the NFC East division – if they could get past the 4-win Carolina Panthers.  There were many storylines coming into the game with the most prevalent being the first time Washington head coach Ron Rivera would face the team that he led for nine seasons prior to his termination late last season.  Additionally, Washington had some quarterback dilemma as captain and starter Dwayne Haskins was spotted in a nightclub without his mask.  Rivera fined Haskins but he got the start Sunday with Alex Smith out due to injury.

Carolina’s defense picked up where they left off in Green Bay last week and forced a 3-and-out to start the game.  The Panthers drew first blood courtesy of a muffed punt.  Steven Sims fumbled the punt and Brandon Zylstra hopped on the loose ball in the end zone for the first touchdown of the day.  Joey Slye missed the extra point and the Panthers settled for a 6-0 lead in the first quarter.  Running back Mike Davis scored on a 1 yard run to increase the Panthers lead to 13-0.  Linebacker Tahir Whitehead, who has seen limited action as of late, intercepted Haskins and set up the Panthers’ first passing touchdown in the month of December.  Teddy Bridgewater connected with Robby Anderson on a 14 yard touchdown to end the drought.  The stingy Panthers’ defense kept Washington off the board until the 1:24 mark in the second quarter where they settled for a 48 yard field goal from Dustin Hopkins.  The two teams played hot potato with both quarterbacks ending their final drives of the half with a pair of interceptions.  Bridgewater was picked off by Kamren Curl and Haskins was intercepted by Tre Boston.  After the topsy turvy turn of events, the Panthers took a 20-3 lead into halftime.

The scoring was over for the Panthers but it turned out that 20 points was enough as the Carolina defense continued its dominance throughout the third, and much of the fourth, quarter.  A second Hopkins field goal brought Washington within two scores before Haskins was benched.  Taylor Heinicke, who spent some time with the Panthers, entered the game and later connected with J. D. McKissic for a 29 yard touchdown within a little under two minutes to play.  Time expired and Carolina spoiled Washington’s party and got their fifth win of the season in the process.

Although he didn’t reach the end zone, Curtis Samuel was clutch for the Panthers with 158 scrimmage yards while Bridgewater finished 197 yards, one touchdown, and one interception.  Haskins finished 14-0f-28 for 154 yards, two interceptions, and a QBR of 36.9 before he was pulled.  Heinicke finished 12-of-19 for 137 yards and one touchdown. Washington falls to 6-9 on the season.