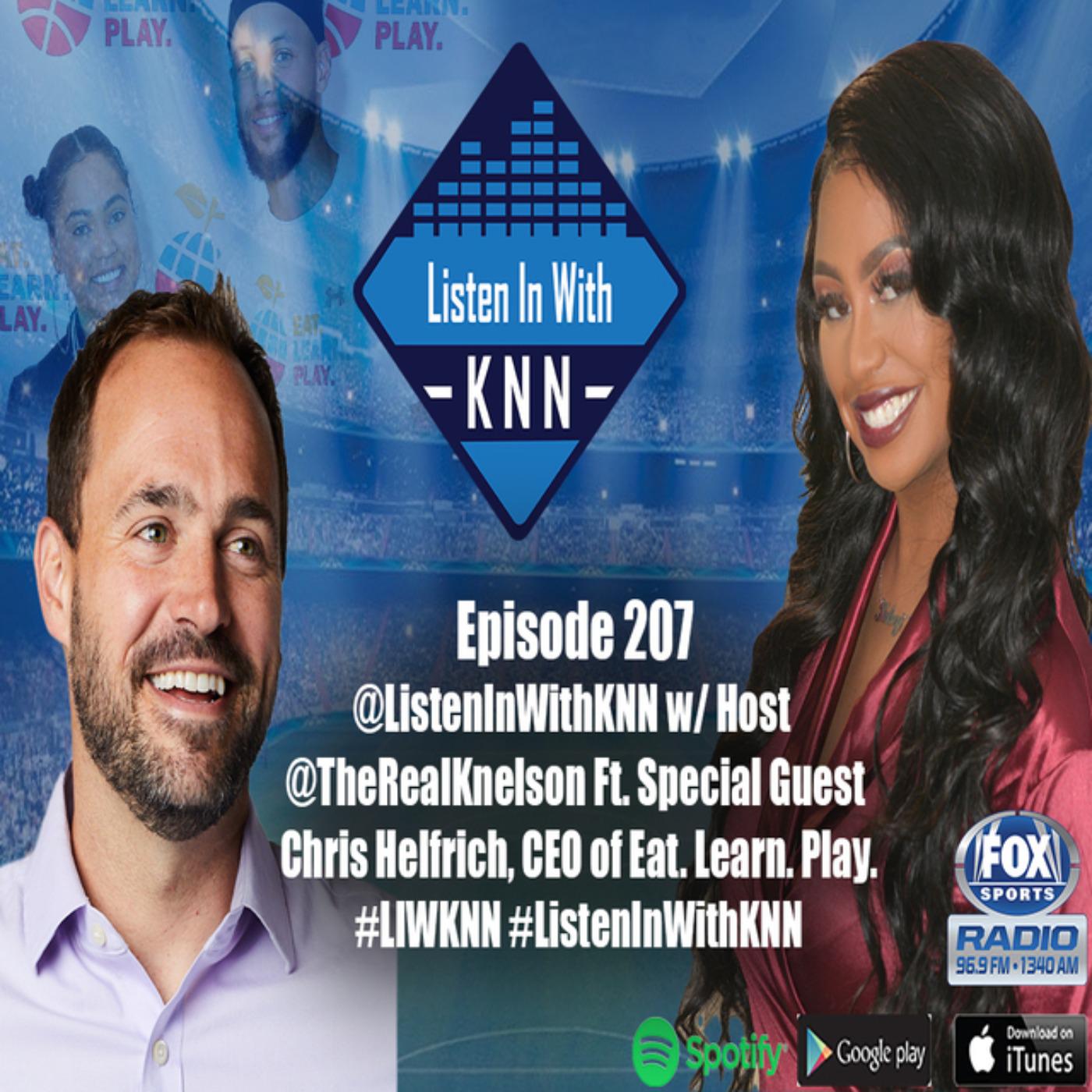 On the 207th episode of “Listen In With KNN” sports talk radio/podcast show presented by FOX Sports Radio 1340AM/96.9 FM, executive producer and host Kelsey Nicole Nelson welcomed special guest Chris Helfrich, the CEO of the Eat. Learn. Play. Foundation to the show.

Co-founded by three-time NBA champion and two-time MVP Stephen Curry, and his wife, entrepreneur, host, and The New York Times bestselling author, Ayesha Curry, Eat. Learn. Play. focuses on positively impacting the lives of kids and families in Oakland. Back in 2019, Helfrich and the Currys sat down to discuss a way to blend and magnify their philanthropic efforts. “They dreamt it up in 2019 with a real focus on Oakland which is where Stephen played for the first 10 years of his NBA career and where the Currys really became a family,” said Helfrich.

The Oakland community welcomed the Currys with open arms and continued to embrace them. It was important to both Ayesha and Stephen to continue to give support to the community because of the tremendous amount of need that is found there. “The foundation came about and was formed at a time when the Warriors were in the process of moving from Oakland across the Bay Bridge to Chase Center. It was not by accident that they wanted a foundation that supported Oakland first and foremost,” explained Helfrich.

Eat. Learn. Play. are the three core aspects that the foundation focuses on. “These are key ingredients for a happy, healthy, successful childhood,” said Helfrich.

The first component is “Eat.” Food is something that Ayesha has been involved in for a long time. “She’s a renowned chef and restaurateur and cookbook author, and this is something that’s really near and dear to her heart and not just dealing with food insecurity, but really her belief in the power and magic of food to bring people together,” said Helfrich.

Over the past few years, much of their work has been focused on fighting hunger with over 25 million meals delivered to date. Still, there is much more work to be done. “Right now, 37% of kids in our community are going to school hungry on a regular basis…it’s unbelievable to think about in this country that has incredible wealth, and our region out here in the Bay Area that has exceptional wealth, how this would be allowed to happen,” said Helfrich. As many of us know, the COVID-19 pandemic has exacerbated the rise of food security in communities.

In addition to providing food for families, the foundation is also working to bridge the food gap in America. “We had Ayesha about 12 months ago testifying before the U.S. Congress on the importance of the government in playing a role in ending childhood hunger once and for all,” said Helfrich.

The second component of the foundation is “Learn.” Stephen and Ayesha “fully understand the importance of education, but I think were self-aware enough to realize that they didn’t totally know where in this vast education space they could have the greatest impact,” said Helfrich. Stephen’s mom Sonya was a teacher and school administrator, so the passion for education is in their blood.

While they were researching and trying to find a specific education space to work on, they found literacy rates are essential to success. “3rd-grade reading levels, we learned, are a leading indicator of future academic success, career success, and much more depressing is the fact that we’ve learned that prison systems in the U.S. use 3rd-grade reading levels as indicators of future inmate populations as they try to plan how to build jails. That was super startling to the Currys and to me,” said Helfrich.

They then researched literacy rates in Oakland and found that literacy is a crisis in the community. Students arrived back to brick-and-mortar classrooms after learning remotely for more than a school year in Oakland like many students across the nation. “What we found out was that amongst elementary school students in the Oakland Unified School District, for Black children, it was 15% and for Latino kids, it was less than 13% reading at grade level,” said Helfrich. Arne Duncan, former U.S. Secretary of Education under President Barack Obama, joined the foundation’s board of directors and has also helped lead this effort.

“Play” is the third component, and was spearheaded by Stephen of course. “It was 100% Stephen, but for him, it stemmed from his own realization on how important physical activity was and participating in individual sports to his character development. We now know this to be true, play is such an important part of childhood development,” said Helfrich.

A key part of the foundation’s efforts is to provide safe places for children to get outside and play in high-quality sports or physical activities. “It’s play equity, we’re not interested in uncovering the next great point guard for the Golden State Warriors. It’s making sure a child has that opportunity to experience the joy of participating in youth sports, going to summer camp, you name it,” said Helfrich.

One example of work they are doing right now is the Eat. Learn. Play. Bus. The bus is an exciting opportunity for the foundation to meet the kids and families right where they are. “We conceived of this bus as a way of meeting kids and families in Oakland where they are with the resources that they need and to do so in a way that’s a really dignified, quality experience for those who are on the receiving side of our charity so that it doesn’t feel like charity at all,” said Helfrich.

The 36-foot long bus was demoed and built to serve the community. On the passenger side of the bus, is a free mobile market for families to pick fresh restaurant meals and produce. “While we do that, the local food bank who’s a dear partner of ours can provide these additional resources in terms of where can you find food on a regular basis because the bus is going to have a steady path around Oakland on a monthly basis so it’s a really neat way for us to be making sure that Oakland kids are fed,” said Helfrich.

The driver’s side of the bus is focused on the Learn and Play aspects. It opens up to be a free mobile bookstore with age-and-culturally appropriate new books for children to pick and take home with them. There’s also a basketball hoop on hydraulics which Stephen uses to practice his shot, that kids in the community will also get a chance to enjoy.  The rooftop area of the bus can be used by their partners to provide giveaways, such as Kaiser Permanente.

An upcoming project that was first revealed in this episode by Helfrich is the Eat. Learn. Play Little Town Libraries. More information about this will be released in the months ahead with a focus on innovation and partnerships in the community.

Helfrich also reflected on Steph’s 2022 All-Star Game performance where he broke the 3-point record making 16 three-pointers and scoring 50 points in total. “It was an unbelievable display. It is amazing. I’ve known Stephen now going back 11, 12 years. I am still left all the time shaking my head at him. Whether it’s him engaging with fans and members of the community or dropping 16 three-pointers in Cleveland at the All-Star Game, it’s unbelievable. It was a heck of a Saturday night,” said Helfrich.