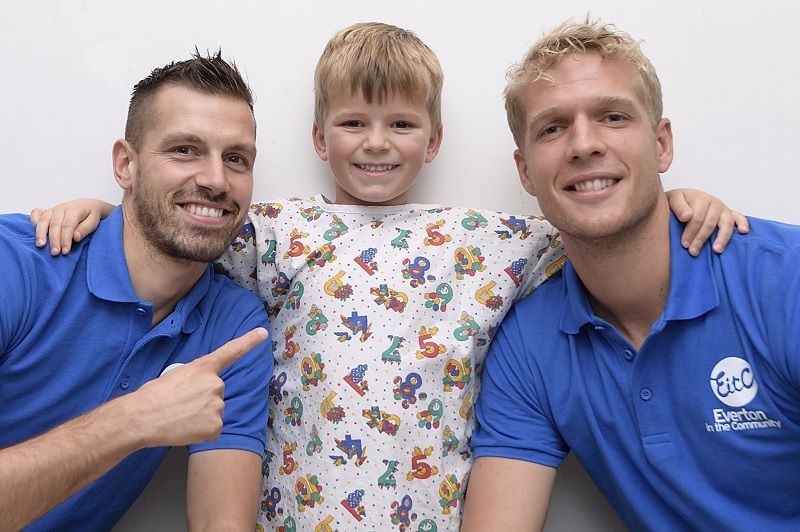 The squad and caretaker manager Duncan Ferguson spent the afternoon handing out gifts and meeting patients, parents and staff at the city’s world-renowned medical facility.

“It means everything, doesn’t it?” Ferguson said. “It’s lovely to see the kids, see their faces, their mums and dads with what they’ve gone through. Just to put a wee bit of a smile on their face and a little bit of joy, it’s very, very rewarding.

“It must be 20-odd years I’ve been coming here. It’s a beautiful place and it really has changed a lot.

“It’s a lovely facility and when you see the way the nurses and the doctors are with the kids, it’s top class.

“It’s a massive area and to have such a fantastic place like this, we’re proud that it’s here in Liverpool.”

For some players, including midfielder Fabian Delph, it was their first visit to the new £250million Alder Hey facility, which opened its doors in 2014.

“Honestly, every single time I’ve come to hospitals around Christmas time, I take massive inspiration away from the resilience that they’ve got. It’s amazing to see how strong these kids are,” explained Delph. “They’re going through a difficult period in their life but to stay strong and positive the way they are is absolutely inspiring.

“I’ve been speaking to some of the parents and they are so comfortable here, they’re very complimentary about the hospital and the staff and just the facilities as a whole.

“It’s pleasing for us to come and see that in a difficult situation that they’re going through, they’re as comfortable as they can be.”

Alder Hey cares for more than 330,000 children each year and has forged strong links with the Club’s official charity, Everton in the Community, which runs regular activities at the hospital.

As part of their visit, the players split into three different groups, taking time to visit children on the paediatric and oncology wards.

“We try to bring more than just happiness – some gifts, too. That’s Everton and the community spirit. The Club is a family and Everton in the Community works right around the city.

“It’s not easy for children to be here at Christmas, and their families. We are here to help them smile and also help make their Christmas a little more special.”

Club captain Seamus Coleman has been supporting the work at Alder Hey for more than a decade and revealed he still takes as much from visiting the patients as he did on his first visit in 2009.

“We’ve been coming here for as long as I’ve been at the Club and the hospital is amazing,” said Coleman. “The facilities have improved so much over the years and it’s a great place for these kids to come when they need it.

“The staff, too, are different class. The effort and commitment they put in to helping these kids is second to none and they should be very proud of the work they do.”