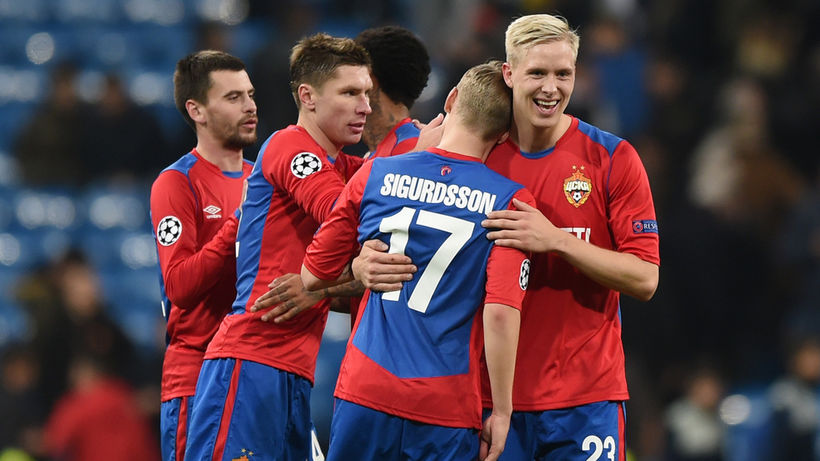 Tweet
Russian Premier League powerhouse CSKA Moscow finished fourth in the league last season thus securing UEFA Europa League action for the forthcoming 2019/2020 season. CSKA Moscow finished 13 points adrift Sergei Semak’s Russian Premier League champions Zenit Saint Petersburg, as well as five points behind second placed Lokomotiv Moscow and similarly five points behind Murad Musayev’s third placed Krasnodar.
CSKA Moscow, Spartak Moscow and Igor Cherevchenko’s FC Arsenal Tula, all effectively qualified for UEFA Europa League action, albeit in the group stages (CSKA Moscow), third (Spartak Moscow) and second (Arsenal Tula) qualifying rounds respectively via their final 2018/2019 Russian Premier League positions last term; FC Arsenal Tula have finished in the top seven in the Russian Premier League for two consecutive seasons.
At the end of the 2017/2018 Russian Premier League season, Krasnodar finished third, whereas 2018/2019 league champions, Zenit Saint Petersburg, finished fifth. CSKA Moscow’s 2018/2019 Russian Premier League campaign, however, regressed from their prior season, which witnessed the Armeitsy finishing as runner-ups courtesy of Lokomotiv Moscow winning the Russian Premier League title by two points.
Elsewhere last season, CSKA Moscow finished bottom of an otherwise hard-fought and competitive Group G in the UEFA Champions League. The Russian super-power registered seven points from six group games, whereas third placed Czech giants Viktoria Plzeň also finished with seven points, thus transferring to the UEFA Europa League. 2018 UEFA Champions League winners Real Madrid topped Group G in the UEFA Champions League last term with 12 points from six games, whilst AS Roma meanwhile also advanced into the knockout stages of the competition via a second place finish in the group.
CSKA Moscow last won the Russian Premier League in the 2015/2016 season under Leonid Slutsky. Throughout their historic title winning campaign, CSKA Moscow won the league by finishing two points clear of FC Rostov.
However, the Russian giants last domestic trophy came just one year ago when the mighty CSKA Moscow defeated fierce rivals Lokomotiv Moscow 1-0 at the 44,899 capacity Nizhny Novgorod Stadium via a goal from midfielder, Khetag Khosonov. CSKA Moscow have won an unprecedented seven Russian Super Cups.
FOX Sports Radio 96.9 FM/1340 AM’s Dean Perretta briefly caught up with Hörður Björgvin Magnusson to discuss CSKA Moscow’s title ambitions in the 2019/2020 season to reclaim Russian Premier League superiority, the philosophy and mind-set of Viktor Goncharenko, as well as the Icelandic star, revealing his thoughts and expectations regarding Iceland’s Euro 2020 qualification campaign.
Dean Perretta: Hörður, with the likes of Spartak Moscow, Krasnodar and Zenit Saint Petersburg slowly closing the gulf of dominance in the Russian Premier League, can you talk about the motivation and intensity within CSKA Moscow’s training camp as we near the kick-off of the new season?
Hörður Björgvin Magnusson: The intensity is much at the moment. We are getting ourselves fit to compete with the best of them and our ambition is to end up higher than last season (where we finished second). We had many ups and downs. Our team is relatively young but hungry. There were glimpses of some great games last season were we won Real Madrid in two matches but unfortunately it didn’t get us through (to the knockout stages of the UEFA Champions League). Right now we are focusing on getting better results than last year and hopefully we can see that through.
Dean Perretta: How would you describe the management ethos and tactical principles of Viktor Goncharenko in your estimation?

Hörður Björgvin Magnusson: Goncharenko’s philosophy is really modern and he is relying a lot on a young squad but with much talent. He, of course, did great things with BATE Borisov in Belarus for many years and did well with that team in Europe. I think he was 31 years old when he managed his first match in (UEFA) Champions League and youngest manager in the history of the competition. A lot of pressing and flexibility in the playing game with tactics such as 3-5-2 and 4-2-3-1. I like his approach well because I think it’s easy to adapt and just shows how quickly I adapted to the Russian Premier League. He is actually a very nice guy and his trainings are very detailed. To be fair, I would rank him in the same class as the young Germans in the game like (Julian) Nagelmann, (Austrian) Ralph Hassenhüttl and (Dutchman) Erik Ten Hag.

Dean Perretta: Fellow Iceland international, Arnór Sigurðsson, is indeed a teammate at CSKA Moscow. What are your thoughts on your compatriot and his performances, especially at international level?

Hörður Björgvin Magnusson: Me and Arnór hang around a lot. When you talk to him you can already see that he lives and breathes football. I would say he his attitude is similiar to the one Gylfi Þór Sigurðsson has. He is very calm and his mentality is to improve every day. He is already a first team player in a top club in Europe and to think he was playing for ÍA in Iceland couple of years ago is amazing. I think he a rising star both for CSKA and for the (Iceland) national team.

Dean Perretta: Lastly, what are your overall thoughts on Iceland’s Euro 2020 qualification campaign thus far and, of course, the important forthcoming fixtures in September against Moldova and Albania?
Hörður Björgvin Magnusson: Nine points out of four games is actually quite good. We have really important matches against Moldova and Albania. We want to get 6 poinst from those matches and espacially at home. It’s always hard to go to Albania because it is a very strong team that can beat any team at home. Our record against them is good though and hopefully we will keep on the same path. Our goal is of course to make it to the European Championship for a second consecutive time (since Euro 2016). We are hungry for more success in the big competitions.We are on course so far.
Tweet