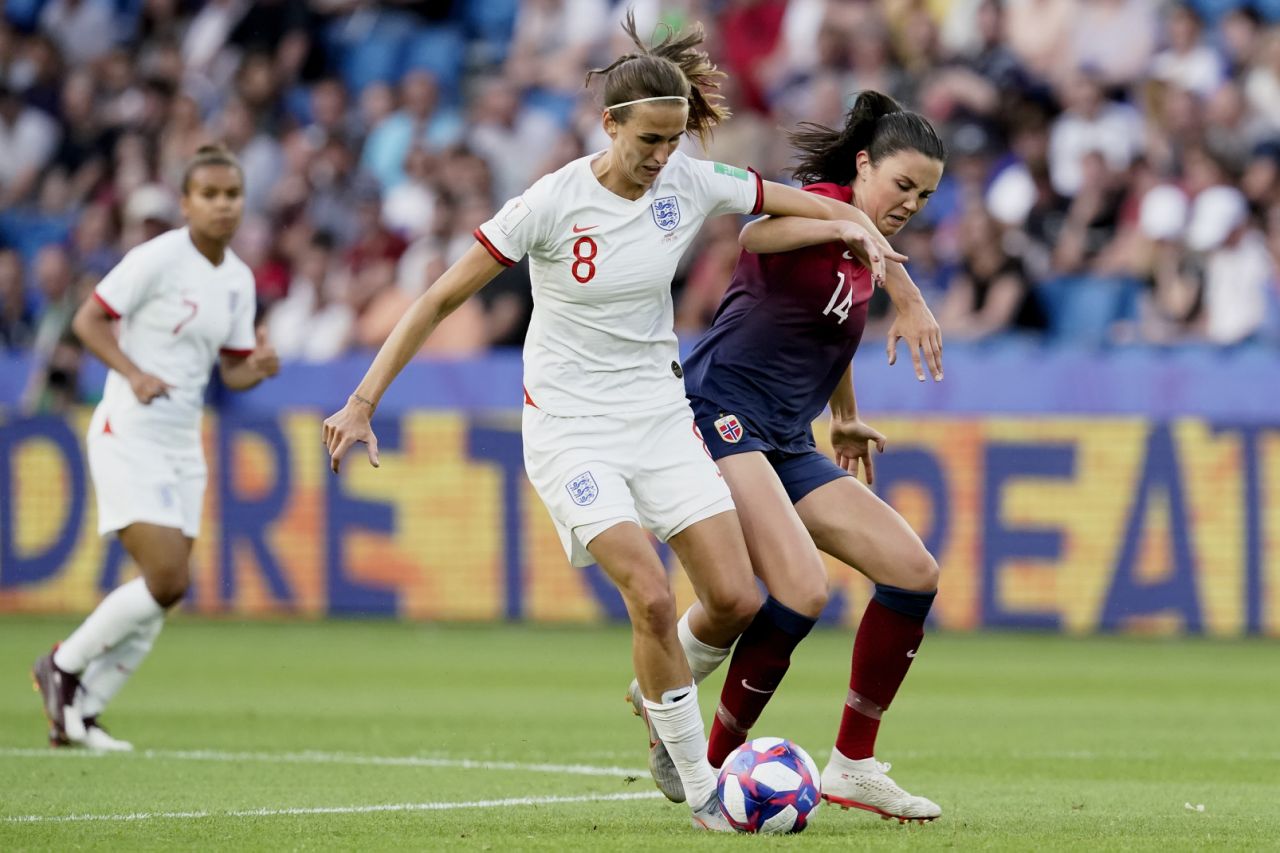 Tweet
England Lionesses and Manchester City star, Jill Scott, 33, who was officially appointed Member of the Order of the British Empire (MBE) in the 2020 New Year Honours for services to women’s football, greatly continues to both positively play a pivotal role in the ongoing growth of women’s professional football to inspire the next generation of women to facilitate fundamental changes within the landscape of women’s football.
The industrious and ever-determined Sunderland-born midfielder, who joined Everton Ladies from Sunderland in July 2006, won the FA Players’ Player of the Year award at the end of the 2007/2008 campaign in her second season on Merseyside.
Scott made her full senior international debut for Hope Powell’s England Lionesses team against the Netherlands in August 2006 and was later selected to play at the 2007 FIFA Women’s World Cup one year subsequently, coming on as a substitute in England’s opening group encounter in a 2-2 draw against Japan at the Hongkou Football Stadium in Shanghai; Scott started the remainder of England’s matches at the 2007 FIFA Women’s World Cup in China, scoring her first international goal (in the 10th minute) in the Lionesses 6-1 win against Argentina.
In late 2013, Scott left Everton and joined Manchester City on a two-year deal. The combatively efficient midfielder, who scored City’s first-ever goal in the UEFA Women’s Champions League, won the double – FA Women’s Super League and Continental Cup 2016/17 – in a largely triumphant campaign which extended City’s reign. In 2019, Manchester City won the Continental Cup once again to elevate Scott’s ever-growing accolades with the Women’s Super League giants.
Scott, who has twice been named as the FA Women’s Players’ Player of the Year (2008, 2018), has throughout her illustrious career seen the hard-working midfielder earn 146 senior international caps for England, becoming the 2nd highest capped England Lioness player in history – and an ever-present influence and highly reliable figure in the England Lionesses team for over 10 years; Fara Williams presently leads with 172 senior international caps for the England Lionesses.

Throughout her successful professional career, Scott has officially competed in four FIFA Women’s World Cup tournaments (2007, 2011, 2015, 2019) and three European Championships (2009, 2013, 2017) which has ultimately seen the growth of the women’s game go from strength to strength.

At last summer’s highly memorable 2019 FIFA Women’s World Cup in France, where the England Lionesses finished fourth, Scott became England’s most capped footballer in FIFA World Cup history, surpassing the legendary Peter Shilton (125 senior international caps for England) in the very feisty and passionate Round of 16 win against Cameroon (3-0) – where Scott was officially voted as the player of the game by the BBC. Scott was selected for the Great Britain Women’s football team at the London 2012 Olympics, which witnessed Scott scoring in the Lionesses 3-0 victory against Cameroon at the Principality Stadium; England Lionesses were defeated 2-0 by Canada at the London 2012 women’s football Quarter-finals. This summer, however, Great Britain women’s football team turns its undivided attention to the much-awaited Tokyo 2020 Olympics.

Jill Scott MBE: The growth and strength in women’s football is gratifying to see. It’s now recognised, taken seriously and played and loved by so many. With that recognition there comes responsibility and I take becoming a brand ambassador for Forever Living very seriously. It’s important to me that I associate with a brand that I think has a positive impact. Forever Living offers a flexible business opportunity that is open to everyone irrespective of gender, age, or background. It’s the ultimate level playing where individuals get to set their own goals. In life it’s important to keep moving forward, to keep growing and achieving whatever field you are in. Forever is that vehicle for so many, for those who are looking to make a few hundred pounds a month through retailing high quality aloe products, to those with ambitions to develop teams allowing them to walk away from jobs that are not satisfying or to have more flexibility and time with their families. I hope my own journey may inspire those who have taken the decision to start their own Forever Living business.

Dean Perretta: In relation to high quality health and wellness products, can you touch on Forever Living’s range and your personal recommendations?

Jill Scott MBE: They have a unique position actually; they’re the World’s largest grower, manufacturer and distributor of aloe vera health, nutrition and personal care products https://foreverliving.com/gbr/en-gb/home. Their drinking gel is 99.7% aloe and because they grow, harvest and manufacture they have complete control over the quality of their products and that is important. I have a demanding lifestyle; I’m up early so it’s easy to grab a drink or an energy bar. I like their personal care products such as the toothgel and also their aloe based skincare. Aloe is great for the skin.  They have a large range and I’m still exploring.  I’m sure I’ll develop more favourites over time.

Dean Perretta: With regards to Forever Living’s values and virtues, what ultimately gravitated you toward the company initially?

Jill Scott MBE: Forever’s core values are based around the empowerment of people. It’s an important decision when you decide to represent a brand you need to be sure that the company’s products and its philosophy align with your own.  You also want to do a good job; be a good role model. I was impressed by Forever’s positive culture that is embodied by everyone I have met both within the company. There is a ‘can-do’ approach, one of support and celebrating success. Having faced my own challenges growing up, it resonates with me that there are so many people within Forever that are determined to succeed and fulfil their potential. It was a key driver for me and kept me going through the hard times. It’s also important to love what you do. I frequently faced challenges having to play in a boys team as a girl, it was the only way I could play. You can’t imagine how aggressive some of the opponents parents could be when I was outplaying their boys, even shouting at them to break my legs “She’s only a girl, kick her!”.

I loved the game so much I brushed myself down and would turn up again to play.  I see those same qualities in so many of the people within Forever; they love what they do.

Dean Perretta: Forever Living’s proud association with Rise Against Hunger is well-documented. However, can you touch on this unique partnership and its long-term goal?

Jill Scott MBE: It’s quite timely that you ask this question as the company recently reached its goal of providing and packing 5 million meals for the world’s most vulnerable. It’s a huge achievement and the meals provided will impact over 51,000 lives in 16 countries, including Zimbabwe, India, El Salvador, Cambodia and South Africa

Forever Living UK hosted three meal-packing events at its head office Longbridge Manor in Warwick packing 407,000 meals with the help of almost 1,000 volunteers. Globally more than 17,000 Forever Living employees and business owners around the world dedicated their time and effort to help achieve the target with volunteer teams in 38 cities across 24 countries helping to reach this meal packing goal.

Dean Perretta: Lastly, where can the audience connect and stay up to date with Forever Living on social media?