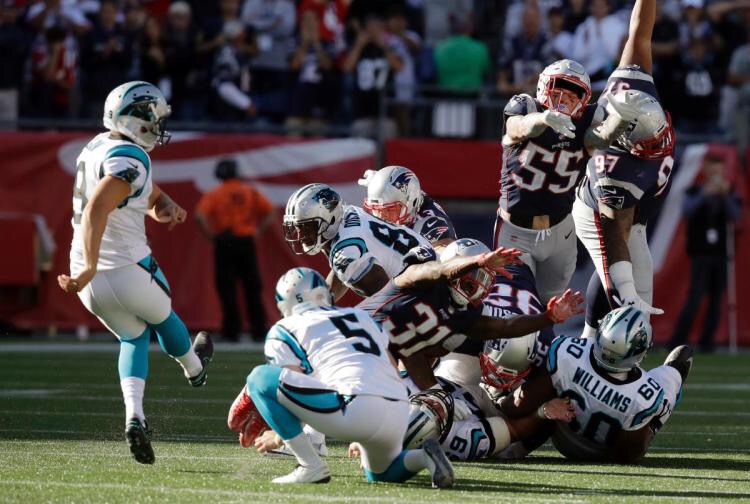 FOXBOROUGH, MASS.- After a back and forth drama packed game, Graham Gano’s 48-yard field goal sealed the upset victory for the Carolina Panthers as they beat New England 33-30 in Foxborough.

“We Expected This” Coach Ron Rivera said in the locker room after the Panthers 33-30 victory. Rivera had this to say in his press conference, “I think the way we prepared this week I thought it was exceptional. I thought our guys came to work on Wednesday, Thursday, and Friday. I thought their attitude, their effort, and the way they prepared was what you have to do to give yourself a chance to win the game. We talked about it and we talked about it last night, that you shouldn’t come here hoping, you should come here expecting. And that’s what I think our guys did. They expected good things to happen today.

Cam Newton was nothing short of specular as he torched the Patriot defense for 316 yards on 22-for-29 passing and four total touchdowns and an interception. After Newton’s interception late in the first quarter, he finished the half a perfect eight for eight with two touchdowns, with 189 yards and a 126.3 quarterback rating. And he led a Panthers offense that had struggled all season to an average of over eight yards per play against New England.

“I feel like this was a breakthrough game for us offensively,” said Newton, who had thrown three interceptions in a 21-point home loss to New Orleans only a week ago and then advised the fans to “be patient.”

Q: You raised a black fist after you scored on your rushing touchdown. Why did you do that?

“It was to signify black power, but more importantly, I pray every night for God to give me a pinnacle to give people hope. I did to raise – to show Black Pride because I am an African American, but more or less, I want all people just to see when I play, I want them to see the joy that I go there and play with. Win lose or draw, it was a great win for us today. I just hope that I put a lot, or not I, we as a team put a lot of smiles on the beautiful people of the Carolinas.”

Carolina (3-1) is tied for the best record in the NFC following Atlanta’s loss on Sunday. Suddenly the Panthers look once again very much like a team that can make some playoff noise – if they can make sure Sunday wasn’t a one-game aberration.

“This can be a jump-start to a great season for us,” Newton said, “or it can just be a flash in the frying pan.”