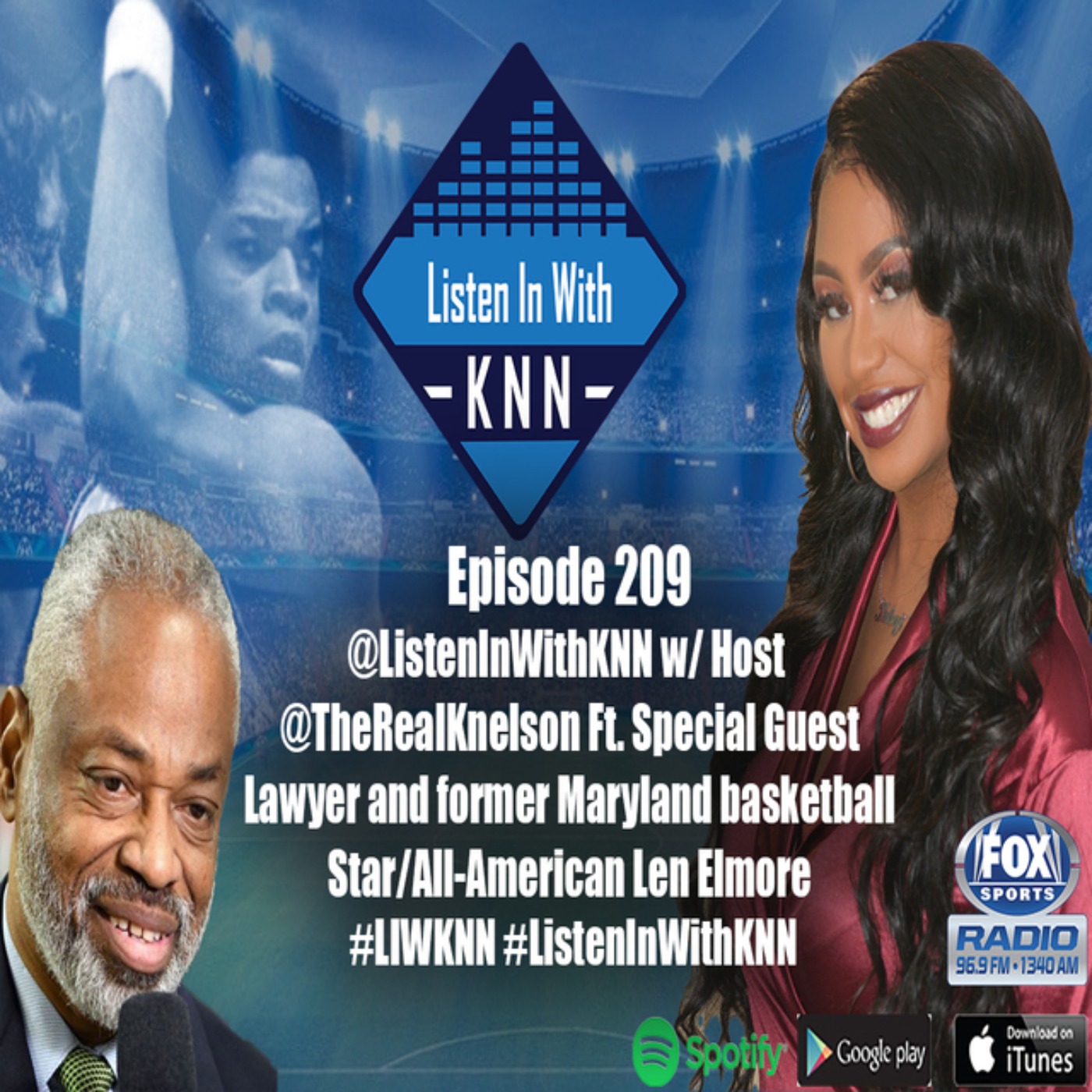 It’s a special March Madness edition, on the 209th episode of “Listen In With KNN” sports talk radio/podcast show presented by FOX Sports Radio 1340AM/96.9 FM with executive producer and host Kelsey Nicole Nelson. As we prepare for the Big Dance and Selection Sunday, host Nelson was joined by special guest Len Elmore, a former Maryland All-American and lawyer, on the show.

Elmore was selected 13th overall in the 1974 NBA Draft by the Washington Bullets and played in the league for 10 years. He spent time with the Indiana Pacers, then Kansas City Kings, Milwaukee Bucks, and the New Jersey Nets. He also played in the ABA with the Pacers for two seasons. After retiring, Elmore received his law degree from Harvard Law School in 1987, becoming the first NBA player to graduate from the institution. He also worked as a college basketball analyst having appeared on ESPN, CBS Sports, and FOX Sports as well as a professor at Columbia University.

Currently, the Maryland basketball team is on the search for their new head coach with Director of Athletics Damon Evans at the helm. Elmore wants them to consider coaches who are young as well as those who are established, but not choose someone who has prior NCAA violations against them. “There are some young coaches out there who’ve proven themselves to have the ability to win and probably need more experience, more time, and a coaching staff that compliments their [youthful] enthusiasm and their love for the Maryland tradition. There are some established coaches out there that essentially have proven themselves to be able to win and need to take that next step up. You need to explore them,” Elmore explained.

Elmore referenced Duke University’s men’s basketball head coach Mike Krzyzewski’s early years with the team who had a 38-47 record overall and a 13-29 record in the ACC. Because they had faith in the progress he was making with the team, they kept him, and has since left a legacy of winning at Duke. “Mike Krzyzewski has left a legacy of winning. He’s turned out some quality players and some quality people,” said Elmore. Some of these include Grant Hill, Shane Battier, and Elton Brand.

Elmore said it is also important to stay true to your morals and principles when selecting the next head coach and not feel pressured by the fans to make a fast choice who is only a quick fix.

To that extent, Nelson and Elmore then talked about the hiring controversies in Grambling State University’s football program under new football head coach Hue Jackson. On February 24, GSU hired Art Briles to Jackson’s coaching staff and faced pushback because of the history he has as Baylor University’s football head coach. Briles was fired in 2016 due to dozens of sexual assault allegations and has not coached in college football since. Briles resigned from his role at Grambling on February 28. On March 7, GSU promoted John Simon, a former coach at the University of Maryland, to offensive coordinator but also has a sexual assault and Title IX complaint from 2021. Elmore restated a quote from famed poet and activist Maya Angelou which says “When someone shows you who they are, believe them the first time.”

“What you’re seeing now is the concept of the pressure of winning, the pressure [being placed] from externally on the leader to win to the point where a guy like Hue Jackson, who I know probably has those basic values and ethics and principle, veer from that to hire people, I’m not saying Art Briles is a bad person, but he’s got controversy attached to him and are others who have controversy them. You don’t people bring people in with that to a program that you’re trying to resurrect,” said Elmore.

Along with finding the right coach for the program, another topic they discussed is the NCAA transfer portal which has become very popular amongst current student-athletes. Elmore thinks student-athletes should prioritize going to a school that fits their own needs and desires instead of pursuing a NIL deal. “I know I went to a school that was going to fit me, my needs, fit the desires I had, and hopefully a program that certainly fit my skills, and oftentimes you don’t think about the NBA until your sophomore, junior, and sometimes senior year,” said Elmore.

He further emphasized that being a college athlete is all about the development and education you get from the school you select. “The idea is to come get developed, find a place where you can develop not only as a player but as a person where you can fit in an environment, a school environment, a campus environment, that’s how I felt,” said Elmore. He did acknowledge there are reasons to transfer from a school whether be not fitting in with the coaches/program or their skill set, but athletes should have goals in mind when they are in recruitment.

Maryland men’s basketball team fell just short in the Big Ten Championship Tournament quarterfinal against Michigan State, sending them home early. This was the Terps’ first time finishing the season under the .500 mark since 1989.

Transitioning to better times for the Maryland team, Elmore reminisced on good times at the legendary Cole Field House when his Terps team only lost two games to North Carolina State University. “Cole Field House was home and it was one of those things were even before Under Armor developed that saying ‘Not in my house,’ that’s the message that we put down as a team…” said Elmore.

As the duo reminisced, Nelson also asked Elmore about his view on the current state of D.C. sports. Elmore discussed the Washington Wizards and the hard time they’ve had after a hot start at the beginning of the season. “They seem to be maybe out of the playoffs and have the opportunity to climb back in and seem to be a couple of games out to be close to the play-in. It really comes down to how much they can salvage going forward,” said Elmore.