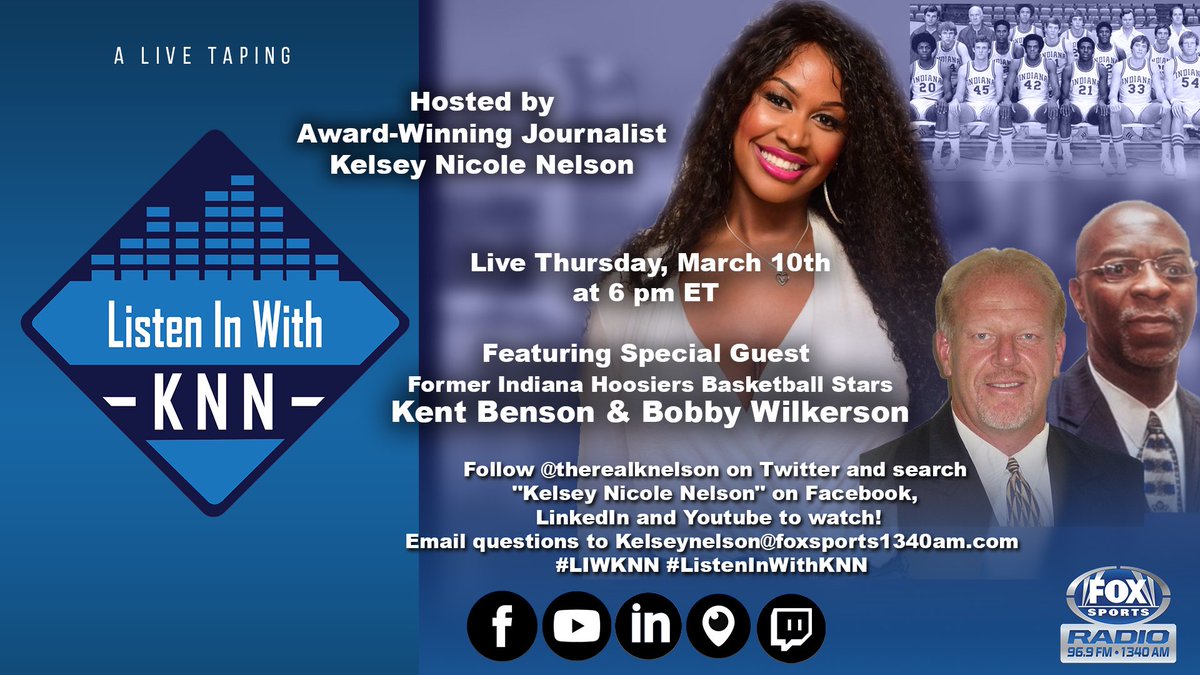 Wilkerson and Benson were part of the 1976 undefeated national championship team and were integral parts of the team’s success decades ago. Both natives of Indiana, they first met in high school competing against each other on opposite squads. They would later become Hoosiers teammates a few years later. Today, the two are still close friends.

Basketball became an outlet for both of them early on. “Having 13 [people] in my family, there was no room for individualism. I wanted to be alone so I started running and I started doing basketball and I just took it from there…through basketball I found peace,” said Wilkerson. Benson fell into basketball citing he was bigger than the kids in his class and those who were older than him. “I developed a love for the game just because of being in Indiana. Indiana is the mecca of basketball, ” said Benson.

After playing collegiately at Indiana, both men played in the NBA. Wilkerson was drafted 11th overall in the 1976 NBA Draft by the Seattle Supersonics. He played seven seasons in the NBA with Seattle, Denver Nuggets, Chicago Bulls, and the Cleveland Cavaliers. Benson was drafted No. 1 overall in the 1977 NBA Draft by the Milwaukee Bucks; he played for 11 seasons with the Bucks, Detroit Pistons, Utah Jazz, and the Cleveland Cavaliers.

Both Wilkerson and Benson love the strong fandom of Hoosier Nation, who were definitely present during the episode’s livestream. “You go into Assembly Hall during a game and it’s deafening. Bobby and I experienced it of course. We were aware of that as we came onto the court to start the game. The fans just erupt,” said Benson. The duo also jokingly described the experience of trying to listen to Indiana Head Basketball Coach Bob Knight calling plays in the midst of the loud atmosphere. Wilkerson shared how he never wanted to get screamed at, so he stood on the opposite side of the huddle.

Benson arrived at IU when Wilkerson was just a sophomore. Benson also experienced the learning that happens in your first year of college and knew he made the right decision committing to Indiana. “It was definitely a learning experience because coming out of high school I was named Mr. Basketball. I had guys that I played against, but nowhere near the caliber of guys that we played against in college,” said Benson.

The team bonded and became a brotherhood after countless hours in practice, even though it was not like that originally. “I had to learn the system so it was a fight. It was a straight-up fight…the end of Kent’s freshman year, my sophomore year, we started coming together,” said Wilkerson. He attributes the friendship among the team to the daily practices with no time limits. “I got sick of looking at everybody and fighting everybody every day, but as time went on we really grew and came together, but it took a while.”

To this day, the 1976 Indiana men’s basketball team is the only undefeated regular season team, that also went undefeated in the post-season ending their quest as national champions. Thus, every time March rolls around, and we discuss the Madness that occurs in college sports, their greatness is often talked about. This comes with saying their names, showing images of them, and praising their game. Except, they haven’t been compensated for all the revenue generated from content like this. In 2017, the television network Showtime released a documentary on the team named “Perfect in ‘76” which highlighted the 32-0 season.

Wilkerson spoke about being featured in the documentary, even though he never signed any documentation, which angered him. “The arrogance of Indiana University, the arrogance of showtime, and the arrogance of Quinn Buckner, my teammate who was chairman of the board for the university is pathetic,” said Wilkerson.

Benson then told a story about when he and Wilkerson formed the 32-0 Undefeated National Champions Foundation. They wanted to raise money for charity with hundreds of memorabilia and items they collected. When they presented it to Indiana University, they were met with an obstacle. “We had to pay a fee, a licensing fee not for the ball, but every item that we were going to put on the online shop,” said Benson. “They wanted us to pay for our own names, images, and likenesses. That’s just absurd.”

Both men suffered major injuries with the team that 1976 season. “When I got knocked out in the Championship game, nobody was there with me. I was in the hospital for three days…Luckily, my brother was at the game. He was able to call home, but they left me [and] flew back. When I finally got out of the hospital, I just went to Anderson. I didn’t feel like I was part of a championship,” said Wilkerson. Wilkerson mentioned the injuries he sustained he still deals with today. He’s had numerous surgeries because of the injury along with the damage his eyes have suffered, including being blind in the left eye.

Benson also recounted when he got injured in 1976 at the start of the Big Ten season against Illinois. “I go up for a layup and one of the Illinois players undercut me and I fall, all my weight on my left wrist. Absolutely destroyed my whole left wrist, broken bones, torn ligaments, and what have you. I chose to play, not miss a game, I may have missed a couple of practices at the beginning, but I practiced, I played all the way through the championship with basically one hand,” said Benson. After playing in the NBA, he developed problems in his left hand and wrist. “I reached out to Indiana University, at the time I didn’t have insurance, and I had reached out to the athletic director and had asked him for some assistance in getting my wrist looked at, taken care of. He just said ‘I’m sorry, we don’t do those kinds of things,’” said Benson.

Wilkerson and Benson currently have a legal and management team through Forbes Consulting and Associates, Inc. in Maryland and Zenobia Waters as their attorney in Atlanta, Ga. “We’re not sitting here like we’re just trying to get some money. We want compensation and we have a management team to deal with that and it will not be a little. We’re not coming in here asking for peanuts, and we’re not begging,” said Wilkerson.

When people hear about the fight they’re enduring, they ask why now? “It’s been 46 years and it ain’t like they’re going to contact us. That’s number one and plus we didn’t have social media 20 years ago or 46 years ago…This [show] is really great because we get to express coming from us, it’s not second-hand. We’re not saying what Coach Knight said and they won’t even talk to us and that’s fine because we’re going to talk to them,” said Wilkerson.

Wilkerson continued on to say, “This is just the beginning. This is serious. Because when kids get hurt, their players get hurt, they hurt their families.”

Viewer Chenier Foitno asked if Quinn Buckner, a former teammate of the two, has a duty in his position as the board of trustees chair. “I think he has a duty he has to perform. He should call us back because he knows the truth. We’re standing on the truth. Their saying nothing tells us where they’re at,” said Wilkerson.

Benson and Wilkerson feel a responsibility to inspire and inform the next generation by being an example for them. “Me and Kent grew up together and the fact that we’re still best friends 40, 50 years later. That’s how sports can connect you. I think it’s important that all the young people, find something that you like and you enjoy because your heart will be in it,” said Wilkerson. Benson also referenced a passage from the Bible, 1 Timothy 4:6-16, to emphasize the duty they feel they have.

Benson discussed the importance of kids learning sportsmanship and playing as a team through programs like AAU. “College sports is a business and if you don’t perform, you’re not part of the team or you don’t participate. If you are a performer and accomplish things for the universities, you’re going to get playing time, you’re going to get recognition. But that recognition needs to be spread across the team and not just to the individuals because it’s a team game,” Benson explained.

If you’re son or daughter is being offered a NIL (name, image, and likeness) deal, Wilkerson and Benson advise you to make a copy of the letter and seek a lawyer to review the document before it’s signed. Also, ask questions to make sure you completely understand their role and read the small print.

Despite all the lessons they learned and all that they’ve endured, both would choose to attend Indiana University all over again. “I would because of the players that were there when I was and I was the only freshman to come in that year…all these guys represented quality of character and they were talented to the point that I wanted to be a part of that,” said Benson.

Wilkerson would choose IU again for two reasons. “One, because of my family. They get to see all the games. And two, because of coach Knight. Coach Knight taught me a lot and it was hard. He was a hard teacher, but I needed to learn that. I needed to learn discipline in my game,” he said. Benson complimented Wilkerson’s abilities calling him “the most versatile player Coach Knight’s ever had”.

As we look at the blueprint the men set for college basketball, both of the men respect Coach Knight for the experience and lessons they learned from him. “He knew every player’s potential and he would do whatever he had to do to get you to your potential…playing for Coach Knight prepared me for life after basketball because of the obstacles he would put in front of you, the challenges, the situations during practice, during games,” said Benson.

Diving into March Madness, Nelson, Wilkerson, and Benson also talked about Indiana’s current basketball team and how the team has fared this far in the regular season. “Indiana’s been a long time coming back to the tradition that we set, the standard we set back in the early ‘70s and it’s exciting to see after 20 long years, a former teammate, Mike Woodson, being at the helm of the Indiana basketball program. He’s doing a great job,” said Benson. Wilkerson echoed the same sentiment. “They get to experience a coach who played there and knows about the tradition that we have set forth for them,” said Wilkerson

Loyal listener Mike Patton asked them if they thought a Big Ten team could win it all this year. “I think there’s a couple teams. Purdue is probably one of them that has a chance. Like with basketball, any given day anything can happen and they’re college students and so you know they have different ideas and sometimes good days and bad days. But, I’m hopeful that the Indiana team will be in the finals,” said Wilkerson.

The No. 12 Indiana Hoosiers defeated the no. 12 University of Wyoming Cowboys 66-58 on March 15 in the First Four. They advanced to the first round of March Madness and play No. 5 Saint Mary’s tonight at 7:20 PM.

To watch the entire conversation, check out the episode below.