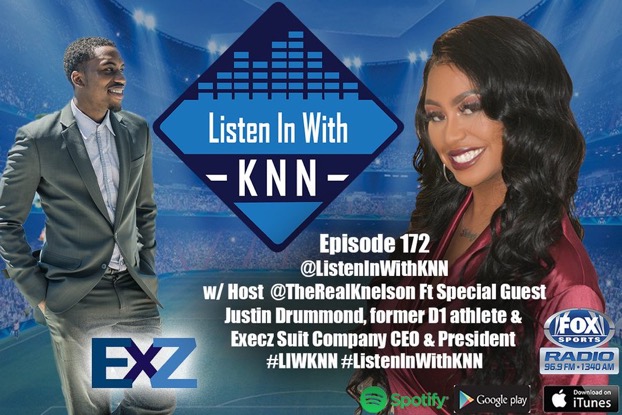 On the 172nd episode of Listen In With KNN on Fox Sports 1340AM, host Kelsey Nicole Nelson welcomed former University of Toledo and Loyola University of Maryland men’s basketball star and CEO of Execz Suit Company Justin Drummond to the show.

Speaking of his basketball journey, he grew up in Bowie, Maryland, which is part of Prince George’s County. It was one of the best areas to thrive in for Drummond and had some of the best basketball players that came from the county.

“The talent, athleticism, network, energy and grit was really apparent in Prince George’s County and that combination really helped build my foundation around the basketball player that I became around the leadership, athleticism and skill. Those three components were what Prince George’s County bred. That competition helped me to continue to grow as a basketball player,” he said.

Drummond spent his senior year at Riverdale Baptist High School and got a Division I scholarship to attend Loyola University of Maryland. He redshirted the first nine games of his freshman season and that lesson taught him to work even harder.

“It was starting off with defense by being at practice early and putting in extra work in a way that resembles, ‘I’m working to get an opportunity to show you all.’ In practice, I’m cooking everybody and it came down to a point where the coach had to schedule a meeting with me. As I started playing, we start winning games and it gave us a foundation for the year that we had next year,” Drummond said.

In 2012, the Loyola University of Maryland men’s basketball team made the NCAA Tournament. He was the Sixth Man of the Year and the only bench player to make all-Conference team and all-tournament team as a sophomore. In spite of his accomplishments, Drummond wanted to be a starter and decided to transfer to Toledo University.

“I looked at my head coach (Jimmy Patsos) at the end of the season and I said, ‘coach, I’ve reached my ceiling.’ I always had confidence in myself and it was time to test the market. I took a chance on Toledo based on the team that we had and the amazing facilities. It was the best decision of my life,” he said.

At Toledo, Drummond averaged 26 points per game in his senior year as a starter. Additionally, he was preparing his life after basketball as he formulated his own business called SparkC, which is a private security management consulting firm. The six foot four guard graduated with a degree in criminal justice in 2015.

“I wanted to be a contractor for law enforcement because I saw how much money is on both sides and ultimately being in business, I can have more impact, live the life I want to live and help my community at an ownership level. We do cyber security management and training technologies. We got some really cool services as we do a lot of cyber security but also helping organizations adapt to this virtual environment with our training technologies,” said Drummond.

In addition to his cyber security business, he became the youngest African American suit owner at age 26 when he became the CEO of the Execz Suit Company. Drummond The company helps make high quality, tailored and affordable suits. The idea came up as he would wear suits everyday while building his business. Drummond did his research and as a result, was able to develop a global supply chain of suit manufacturers.

“It was a good investment to have ownership in a location that really gives us the full option to tailor the pricing to fit the community I wanted to serve. It took about three years from when I made my initial business agreement to actually launching the company to sell it. We started selling our first suit to the masses in early 2019 but we were selling them to friends. People are really loving it in the DMV and we’re the DMV’s best kept secret.”