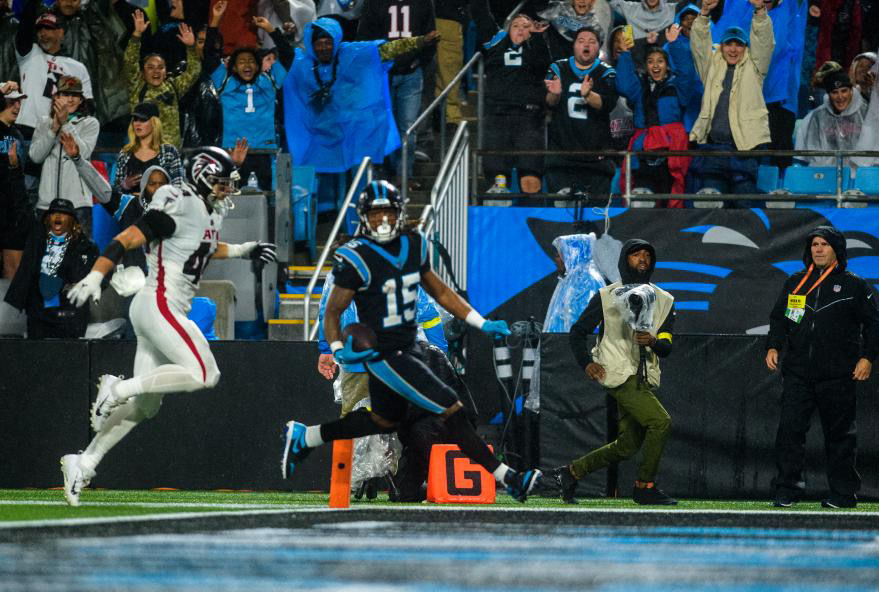 After losing to the Atlanta Falcons in Week Seven in a wild finish and getting utterly embarrassed at Cincinnati last week, the Carolina Panthers were back in Bank of America for Thursday Night Football with something to prove. Decked out in all black with redemption on the brain, the Panthers looked like a completely different team the first half. With PJ Walker starting at quarterback, Carolina capped off their first possession with a 46 yard field goal by Eddy Pineiro – a good sign considering how things ended for the kicker in the teams’ first matchup 12 days ago.

Leading 3-0 going into the second quarter, Carolina’s Laviska Shenault raced 41 yards off the left end and into the end zone to give the Panthers a 10-0 lead with 4:34 left in the first half. The Falcons continued to have their share of struggles on offense with quarterback Marcus Mariota intercepted by Jaycee Horn with 4:11 left in the second quarter. Carolina took advantage of the turnover with a 49 yard field goal and the Panthers led the Falcons 13-0 with 1:47 left in the first half. It wasn’t until time was expiring that Atlanta finally got on the board with a 33-yard field goal by Younghoe Koo to trim the lead to 13-3.

Carolina has had a tendency to get a little conservative in the second half, and they did start slowly. The Falcons pulled within four after a 7-yard touchdown strike from Mariota to receiver Drake London. Koo missed the extra point, leaving the score 13-9 with 6:15 left in the third quarter. D’Onta Foreman continued his dominance on the ground with a 12-yard touchdown run off the left tackle. Pineiro missed the extra point, making the score 19-9 with 1:51 left in the third quarter. He added a 40-yard field goal in the fourth quarter, however, to push the lead to 22-9 with 9:22 to play.

Just when the Falcons looked dead in the water, Mariota made pass plays of 21, 18, and 18 yards; capped with a 25 yard touchdown strike to a wide open KhaDarel Hodge in the end zone. Koo missed the extra point yet again. The score stood at 22-15 with 2:56 to play. Just to add some drama, Carolina went 3-and-out with 2:33 left in the game and Atlanta holding on to one timeout. Marquis Haynes had a crucial sack on second and fourth downs to all but seal the win. Pineiro tacked on one more field goal for the final score of 25-15. The Panthers improve to 3-7, 3-1 in the NFC South. They travel to Baltimore next Sunday to face the Ravens.