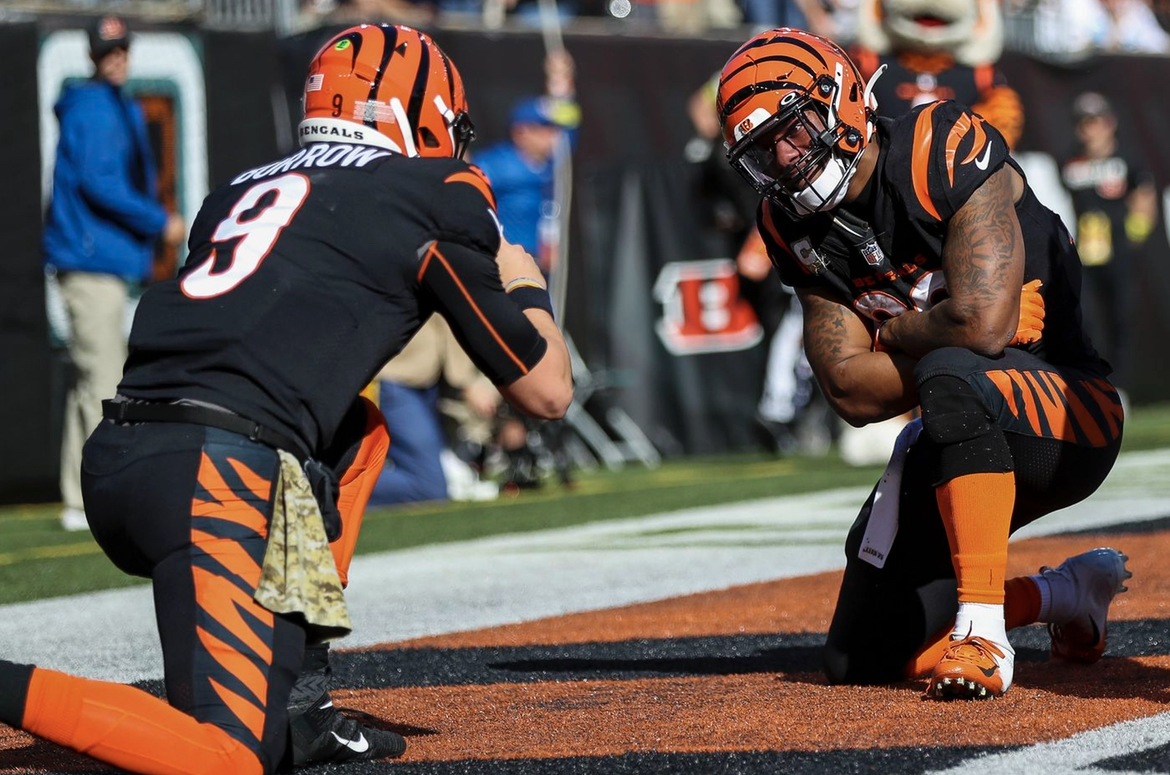 The Carolina Panthers went to Paycor Stadium and got curb stomped. There’s many adjectives that could be used to describe the beating the Panthers took at the hands of the Cincinnati Bengals, but none of them would do it any justice. From the first snap, it was all Bengals. Led by Joe Burrow and Joe Mixon, the Bengals scored touchdowns on all but two offensive possessions. Mixon had four of his five touchdowns before the intermission while the Panthers remained scoreless. Cincinnati held the ball for 11:45 of the first quarter while Carolina only managed to run six plays for 8 total net yards in the same period.

The Bengals rattled off 28 points in the second quarter while the Panthers offense continued to sputter. Starting quarterback PJ Walker was unable to regain the spark he had last week against the Atlanta Falcons and threw two interceptions in the second quarter – one to Germaine Pratt and the other to Jessie Bates. He was replaced with Baker Mayfield after the half with a 0.0 passer rating. Carolina’s only first down of the first half came by penalty when cornerback Cam Taylor-Britt was flagged for illegal contact with 6:36 to play in the second quarter. At one point, the Panthers had more penalty yards (30) than total net yards (29). After three rushing touchdowns, Mixon added a 12 yard touchdown reception to give the Bengals a 35-0 lead before the Panthers fumbled the kickoff as time expired before halftime.

Carolina got the ball to start the second half and Mayfield led an 8-play drive capped off by an 8-yard touchdown throw over the middle to tight end Tommy Tremble to give a tiny little spark, if you can even say that. The Bengals responded with Mixon scampering into the end zone from 14 yards out for his fifth score of the day; a franchise record. Up 42-7, the Bengals eventually pulled Mixon and Burrow and Brandon Allen finished the game at quarterback. The Panthers hit pay dirt again in the fourth quarter when Mayfield connected with Terrace Marshall Jr for a 21-yard touchdown to cut the lead to 42-14 with 7:47 left in the game. With less than two minutes left to play, Raheem Blackshear carried 2 yards for the Carolina touchdown making the score 42-21 in favor of the Bengals. Carolina falls to 2-7 on the season while Cincinnati moves to 5-4. It’s a short week for the Panthers as they prepare to host the Atlanta Falcons for Thursday Night Football at Bank of America Stadium.

Carolina’s offense has had their share of ups and downs, but the defensive performance on Sunday was an absolute head scratcher. Facing an offensive line that came into the game ranked 31st in sacks given up. The defense gave up 241 yards on the ground to the 30th ranked rushing team in the league. –