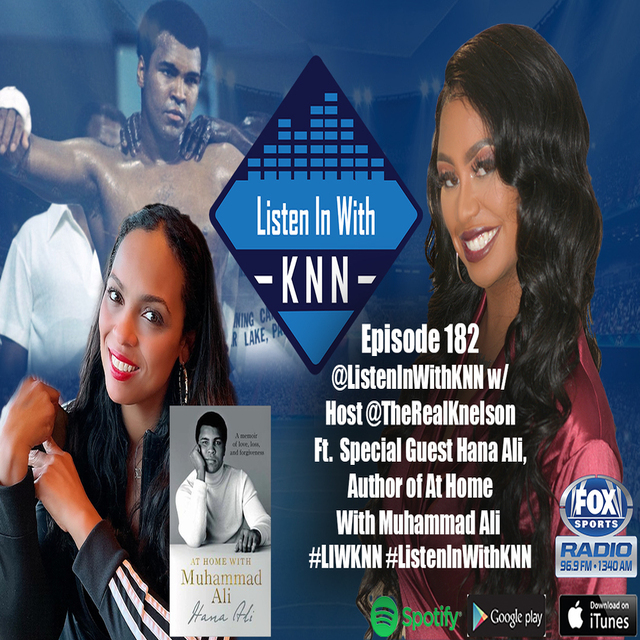 On the 182nd episode of “Listen In With KNN” presented by Fox Sports 1340AM/96.9 FM, host Kelsey Nicole Nelson welcomed special guest Hana Ali to the show. Hana is one of the seven daughters of the famed late great boxing legend Muhammad Ali.

Hana Ali was the third youngest child of Muhammad Ali. Today she is the author of three books about her father’s life, which include “More Than a Hero: Muhammad Ali’s Life Lessons Presented Through His Daughter’s Eyes,” “The Souls of a Butterfly: Reflections on Life’ Journey” and most recently “At Home With Muhammad Ali: A Memoir of Love, Loss and Forgiveness.” Along with being an author, Hana is a realtor in Los Angeles and surrounding areas. She is also the wife of Kevin Casey of Bellator MMA.

As Nelson and Hana began the interview, Ali was eager to share her candid experience growing up with the infamously famed boxer Muhammad Ali or as she so affectionately referred to him simply as her “dad” or “father.”

She expressed during her childhood she didn’t feel any pressure growing up. She said, “It was an experience… I remember as a little girl just seeing the adulation that his fans would give him and walking through airports and feeling this thunderous vibration in my chest as everyone would stop and applaud as we walked upon a plane and/or walked into a room and I remember thinking why are they clapping or why do they love him so much?”

Hana was a witness to her father’s most memorable moments of his career. She reflected on the  experiences that all happened right through her eyes. “It was like being a fly on the wall. I was just three or four years old and of course later people would try to explain to me that my father was respected and loved for the stance he took and that he was a great boxer. I started to understand.” Hana expressed that her father would sit her and her siblings down and explain that the world would treat them better, and that they would have special treatment. Hana added, “That’s just inevitable because of who he is…”

Hana was able to speak on the behalf of her father, when she was asked if she and her father ever envisioned that America would eventually have its first African-American President in former President Barack Obama. “I don’t think it was even a thought…” she said of her own thoughts. But exclaimed, “For my dad yes… He was advocating for a black president and trying to get Mayor Bradley to run and he [Muhammad Ali] said, ‘if not you then who is the next best candidate?’ Dad was already trying to get this down in 1979… So when Barack finally was running, my father was supporting him and he was not just supporting him because he was black but it was just a plus that he was so intellectual, intelligent, and level-headed and it made it even greater…That was definitely a wonderful thing to see…”

Many will be surprised to know that Ali had an unwavering dedication outside of writing books about her father for a whopping ten years. “The thing I’m most proud of is the service to working with children. I worked as a behavior specialist… and I am most proud of that, working with autistic children. The writing is sort of in the down time and I mean I have just something to say. Strangers do it and he’s my father…” Hana eventually described what inspired her to write each of her books about her father. “It started off with my first book ‘More Than a Hero’ and it was really going to be a Father’s Day book for my dad, a gift. I just put it together…my mom saw it and she happened to be with a friend who was a literary agent. So, they said this was a book. So, that’s how that got published,” said Hana.

When comparing all the books she wrote about her father, she explains that the memoir was definitely an emotional book for her. “At Home with Muhammad Ali was just the most difficult one for me because I had to tell three stories at once… I just really wanted to humanize him [Muhammad Ali] and show people just like everyone else he had his trials and tribulations, his doubts, his worries and he shares those through his audio diary, that he left and gave me,” said Hana.

To conclude, Hana enjoyed sharing her father’s stories and his personal life with the world. As one of his daughters she has become used to sharing details of his life with adoring fans. “I’m used to sharing him with the world, I have no problem doing that. I love being attached to him and I love being his daughter. I can do it all day long,” Hanna exclaimed. As Hana continues to share her father’s life story, her upcoming plans include producing a graphic memoir about her father that will be highly anticipated.

If you are interested in getting Hana’s books visit: Amazon.com. You can also purchase “At Home With Muhammad Ali” on: HarperOne. To keep connected with Hana follow her on Instagram.

Listen in with KNN – Remembering Muhammad Ali with Hana Ali