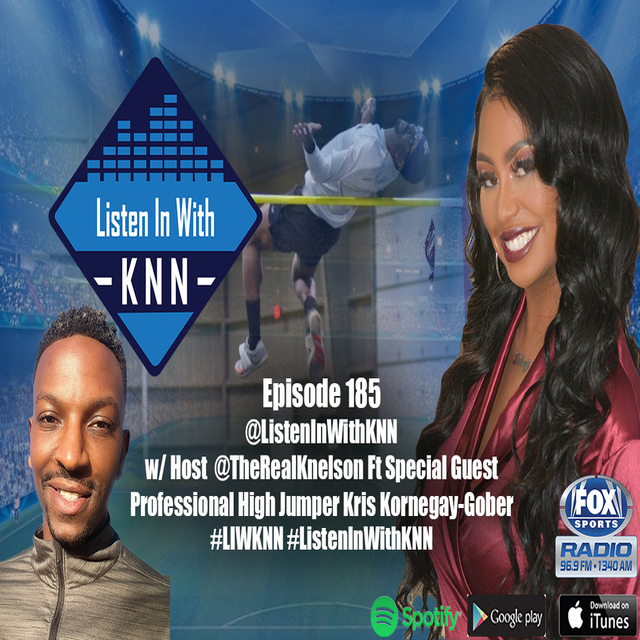 On this special 185th episode of “Listen In With KNN” presented by Fox Sports 1340AM/96.9 FM, executive producer and host Kelsey Nicole Nelson welcomed special guest Kristopher Kornegay-Gober, a professional high jumper to the show.

After graduating from McKinley Technology High School in Washington, D.C., Kornegay-Gober walked on to the track & field team at North Carolina State University. He continued to prove himself, and by the time his senior year came he was offered a full-ride scholarship. On discussing his journey from being a walk-on athlete to obtaining a full ride Kornegay-Gober said, “When I first applied to NC-State I didn’t even know NC-State was a division one… I was humbled very fast…” While in college, Kornegay-Gober was a 2013 All-American in the indoor high jump as well as a two-time NCAA regional qualifier in the high jump and a five-time All-ACC champion in both the indoor and outdoor high jump. In 2013, he also earned his third-straight All-ACC accolade in the men’s high jump competition, finishing 11th at the NCAA Championships in the high jump at 7′ 2.50″.

On looking at his journey into the track world, it was initially a Visa advertisement that inspired Kornegay-Gober to become a high jumper. “It [the ad] looked cool, he jumped over a bar and a car was going under him and it was graphically cool. So, the very next day on the bus on the way to the track meet I told my coach, ‘hey I wanna try high jump today’ and he was like you’d probably be good at that,” said Korneygay-Gober.

When asked how he feels about watching the Team USA athletes headed to Tokyo he said, “I think we’ll do really well, especially track… but I watch everything when the Olympics is on.” The 2020 Tokyo Olympic games were postponed last year due to Covid-19 and safety measures. This year it was deemed safe enough for the athletes to compete while following COVID protocols. With the Olympic Games resuming a year later athletes around the world had a chance to resume representing their native countries proudly as the world watched.

During this year’s Summer Olympics Games there was lots of chatter about one member of the USA delegation in particular, American track star Sha’Carri Richardson who was unable to compete after a positive marijuana test. When asked about the situation by Nelson, Kornegay-Gober said, “I think the rules and certain parts of the anti-doping agency, their standards need to be re-evaluated… It’s very unfortunate.” A very difficult topic for anyone to speak upon for someone else but most importantly, Kornegay-Gober is a Washington, D.C. native and has strong ties to the DMV area.

Kornegay-Gober’s mom taught at a D.C. charter school as a longtime educator. Following in his mom’s footsteps Kornegay-Gober also looks to inspire the youth. In words of encouragement to them he said, [to] “All the young kids out there keep pursuing your dreams… For all the young jumpers out there, keep at it!”

Listen in with KNN: Track Takes Center Stage at the Olympics with Kristopher Kornegay-Gober on AudioStaq