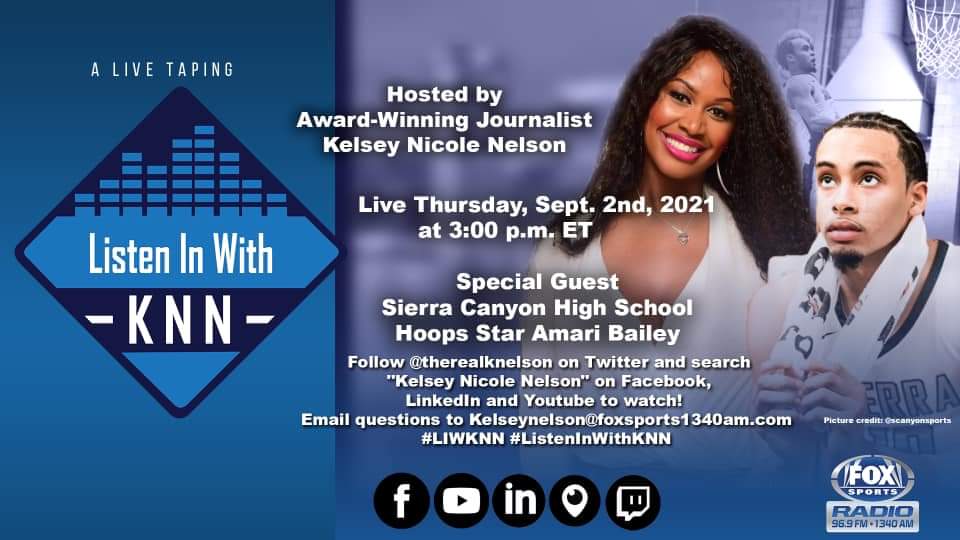 On this special episode of “Listen In With KNN” presented by Fox Sports Radio 96.9 FM/1340 AM, executive producer, and host Kelsey Nicole Nelson welcomed rising young basketball star Amari Bailey to the show.

The Chicago native Amari Bailey is considered to be one of the best players to ever come out of the private co-ed day school Sierra Canyon High School, located in Chatsworth, Calif.

Bailey started loving football at a young age but wasn’t allowed to play football by his mother. Instead, his mother Johanna Leia put a basketball in his hand and he has loved basketball since then. When it comes to his inspirations his month has also been one. Bailey considers his mother his best friend with an honest, open, and free-flowing relationship, and he’s very thankful to have her in his life.

Before reaching high school, Bailey gained some popularity having appeared on the hit show “Bringing Up Ballers,” a television show on Lifetime about five Chicago-area entrepreneurs whose children are some of the best up-and-coming basketball players in the country.

Amid the spotlight, Bailey earned early attention from DePaul University. Before high school, he had shortly committed to DePaul, only to decommit later. The attention he received helped propel him to Sierra Canyon School for his high school career. Describing his experience on “Bringing Up Ballers,” Bailey said, “I was anti at first with having a camera in my face, I didn’t like it. I had to get comfortable with it, if this is something I want to do then you’re going to have to have a camera in your face.”

While Bailey was a junior in school, he averaged 29.2 points, 9.1 rebounds, and 6.5 assists per game. Bailey’s breakout season led to the prestigious California’s Mr. Basketball accolade that recognizes the best high school boys basketball player in the state. Being so young and so accomplished, Bailey was asked by Nelson how he remains grounded and focused amidst praise from outsiders. Bailey said, “Just keep the main goal the main goal, knowing I’m not where I want to be. Also, you have to know that all of this can be taken away from you at any given day, just having humility and gratitude will take you farther than you could ever imagine.”

Bailey’s accomplishments have not been limited to his high school. In 2019, Bailey helped lead Team USA to win a gold medal in the FIBA Americas U16 championship while averaging 13.2 points, 4.2 rebounds, and three assists per game in the tournament. “It was such a blur, that whole experience. And the whole time I’m thinking damn I’m on Team USA and I’m representing my country,” said Bailey speaking on his experience traveling out of the country and participating in the FIBA Americas U16 tournament. Amidst all of the traveling and fame, Bailey has had important mentors in his life helping to guide him along his journey.

Rapper Drake often makes appearances at Bailey’s games because of dating Bailey’s mom and mentoring Bailey. Drake has taken Bailey under his wing, showing him nothing but love, and helping to showcase how a man should conduct themselves, and how to handle himself.

Another mentor in Bailey’s life has been his head coach Andre Chevalier. Coach Chevalier has instilled values in Bailey not only on the court but off the court. Speaking of his relationship with his coach Bailey said, “I don’t know where I’d be without coach Dre. He’s taught me how to work the system, like knowing how to openly communicate, knowing how to work my hand, and positioning myself for life. He’s been a big helping hand for sure.”

When Bailey is not on the basketball court, one of his passions includes collecting his massive sneaker collection. Some of his favorite kicks include his Air Jordan Retro 11s, 2019 Bred 11s, and his Jordan Nike Air Why Not 0.2 Westbrook’s which he won a gold medal in Brazil while wearing. He prefers to wear his Kobe’s, the basketball shoes that he played in when one of his good friends passed away.

Despite being the number one player in the country, Bailey continues to aim for improvement as he prepares for his senior year on the Sierra Canyon boys basketball team.

Today, as a senior, Bailey is a five-star combo guard on the Sierra Canyon boys basketball team where he is teammates with Bronny James, who is the son of NBA star, and currently Los Angeles Laker Lebron James. Bailey is a class of 2022 University of California at Los Angeles (UCLA) commit. When asked about other college basketball offers he received and his decision to commit to UCLA Bailey said, “UCLA was always home for me I felt like.” The numbers Bailey was able to put up in high school helped lead to the offer he received from UCLA.

Bailey displays a calm and relaxed demeanor on and off the court while keeping things light-hearted. “I’m really with all the jokes so if you want to bounce something off of me whether you see me in person or DM or whatever it is let’s do it,” said Bailey. This approach and perspective in life while being a senior in high school has helped Bailey focus on improving his game.

As Bailey finishes up his high school career, he has a bright future with the skills and leadership he possesses. Having the tools, mentorship, and athletic ability, Bailey is in a good position to be successful at UCLA. Bailey has the opportunity to not only be special in college but also possibly the NBA if he decides the NBA is where he wants to be in the future. The ball is truly in Bailey’s court.

When Bailey is not on the basketball court he can be found on his Instagram sharing pictures of his journey through high school and life.