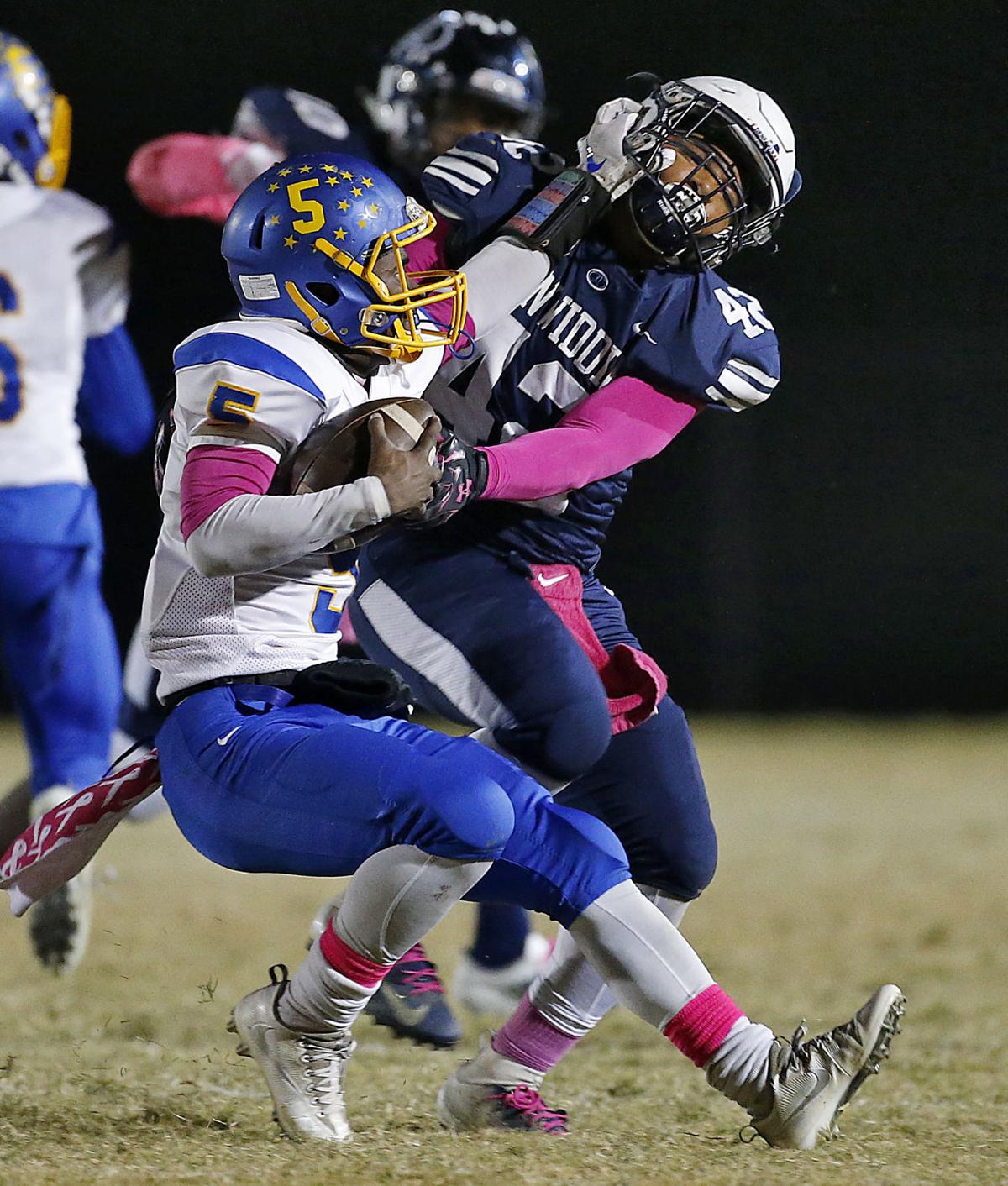 It’s rare enough to see one sensational game in a year. Many Hopewell fans witnessed that last week, unfortunately in a loss, as the tough Thomas Dale Knights came into our house and overcame our Blue Devils in Double Overtime 49-42. However, Hopewell rebounded this past Thursday night in Dinwiddie( to avoid Friday rain) when this second sensational game occurred. Hopewell ( 7-1) prevailed on a night when defenses shined, 7-0, and won against the Generals ( 8-1) for the first time since 2012. The Chaplain of the football team, Pastor Phil Andrews told me later that it was the first time that a Dinwiddie team had been shut out since 2005. It also marked Dinwiddie’s first defeat in 32 games.

What’s especially amazing is how Hopewell did it – without their starting quarterback Daniel Grier, who had an injured shoulder and did not play. Sophomore Trey Henderson started and ended the game at quarterback, while Senior Demonye Taylor ran the team 90% of the way in-between.

What they pulled out was truly amazing: Taylor ran the offense almost flawlessly, completing 4 of 8 passes for 44 yards and no interceptions. He also kept the defense in check with his running- 19 times for 95 yards. When Henderson returned to quarterback in the fourth quarter, he showed world class speed breaking through the line and outracing the secondary for an 80-yard touchdown jaunt.

What makes Hopewell’s victory so much more impressive is that Taylor and Henderson only learned the day before that Grier would not be available. Great teams have the ability to rise to the occasion in the midst of adversity. Teammate Robert Briggs added a solid game on the ground with 18 rushes for 66 yards, and the offensive line performed well all night opening holes and providing protection, particularly Ronald Webster and Jayden Kelly.

The Blue Devils defense stepped up, even more, recording their 5th shutout in 8 games. They forced 5 turnovers including two interceptions, by Daquon Blow and Henderson. Travonte Jones continued his strong season’s defense with two of his team’s three sacks plus relentless pressure. Anthony Hale had four tackles, two for losses, while Henderson added two tackles, one a tackle for a loss, his interception and touchdown run.

An area where Hopewell needs their most improvement, though is, in Head Coach Ricky Irby’s words, their “undisciplined play.” The Blue Devils hurt themselves with many major penalties, a pattern, unfortunately, saw all season. Coach Irby remains patient with his team and shared after the game how he is challenging them to “not to get caught up in the highs and lows of the game,” and to “stay even-keeled and just play each play, then play the next play. “ He went on to say, “If something bad happens, you have to be able to overcome adversity. That’s what we want to teach our kids not only on the football field but also in life. “

How important this is for football teams, and each of us, as we can get knocked off course by various life trials too. As team chemistry is set by head coaches and assistant coaches, so in our lives, our friends, employers, and our family, can be important contributors to how we navigate our course and don’t have to be penalized.

My wife and I, when we reflect on these kinds of issues, regularly come back to the presence of our faith to help anchor our lives. What balance there is in having the sustained guidance and direction of the God who lives within us, along with the human accountability of those around us.

John Donne once said, “No man is an island.” Although written in the 17th century, it is a timeless saying that reminds mankind of their need for community and accountability. Donne as a Christian man realized that he was a better person when grounded in faith and authentic relationships.

How gratifying to see how in the midst of life’s imperfections, this high school football team is learning these real-life lessons in their day to day football lives as they interact with peers, coaches, and chaplain. As they experience the highs and lows of life with an increased balance of faith and authentic relationships, the sky’s the limit in terms of their success not just in football, but in life.

Jeff Butler is the Pastor of Woodlawn Presbyterian Church in Hopewell and is the Play by Play Voice for the Hopewell Blue Devils over WHAP Radio 1340AM and 96.9 FM. The game can also be heard online at www.foxsports1340am.com or a cell phone at 605-313-0571.

Tonight at 6:30, you’re invited to “Simply Unique”, at 230 S. 15th St. in Hopewell for the Coach Ricky Irby Show. The Show which can be heard on WHAP radio will be broadcast throughout the facility.