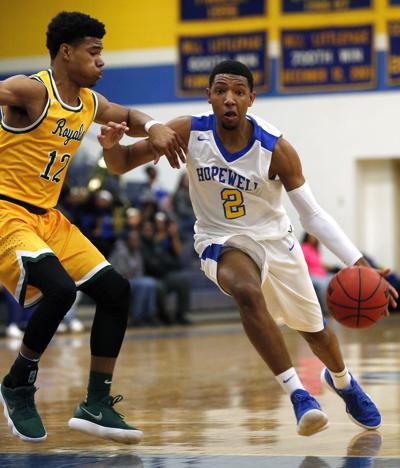 These teams have played twice in the last five days – and the combined  margin of victory: three points! Wednesday’s game may not have ended in overtime, as in the Holiday Classic, but it was another  thrilling battle featuring a 14-2 fourth quarter run by the Royals, ( 7-4), almost leading them to another victory over the Blue Devils.( 7-2)

Hopewell  breathed a big sigh of relief having outplayed Prince George for most of the game.  They led at the half 24-15, after three quarters 37-29, and held their biggest lead of the game , 46-33, midway through that fourth quarter.   A big contributor to the comeback was full court pressure placed on Hopewell by Prince George Coach Travis Carr. Twice Hopewell was unable to successfully inbounds the ball, and the third time, Sophomore guard Elvin Edmonds somehow freed himself from a double team to advance the ball into the front court.  On yet another occasion, a key Hopewell time out by Head Coach Elvin Edmonds Sr. prevented a time clock violation for not advancing the ball past midcourt in 10 seconds.

With scouts from Friday’s night game against Thomas Dale in the stands, it appears likely that  Coach Edmonds has his main coaching topic set for Thursday: handling full court pressure.

A lot of positive themes though  continued to develop for the Blue Devils. They are a very unselfish team,  patiently passing the ball around the perimeter looking for the best shot. They play tough, tenacious defense, both in their man-to man and 2-3 zone.    They continue to have balanced scoring led by sophomore Edmonds with 16 points, with Jr. Dennard Hutchinson and Soph. Lamonta Ellis adding 11 each. Senior Captain Travonte Jones contributed 7 points, in addition to a solid all around game.  Prince George placed only one player in double-figure scoring with Jacob Thompson’s 12, but they also had solid performances from three other starters, Jajour Lambert, Johnny Soto, and Patrick Gee each chipping in with 7 points a piece.

Much talent reigns  on both teams, which are probably  going to the playoffs in their respective divisions – Hopewell, Division 3 and Prince George, Division 5.  ( greater school enrollment)

Former  Hopewell Head Basketball Coach Bill Littlepage helped me with last night’s radio broadcast, and will be back on the airwaves of WHAP Radio this Friday night,  as well as each home game for the rest of the season. The station is looking for more sponsors that can help bring the public our away games as well.

In the Junior Varsity game that started the Wednesday night action, our J.V. team prevailed over the Royal’s JV. 69-66.  It was the first action for Prince George’s JV in a month, as their entire December schedule was forfeited because of a fight with the Thomas Dale JV. squad.  As Dale also forfeited their December games, this Friday night their JV team will be back in action for the first time as well against us.

Discipline, though painful, can  prove to be a wonderful building block in the lives of these players.  As they strive to be their best on the court, this also involves the managing of their emotions in the heat of  battle. What a great opportunity to call upon the strength of the Lord in those trying times, and gain the self-control and the perspective needed,  both to succeed in basketball , but also as these young men progress t

Jeff Butler pastors the Woodlawn Presbyterian Church here in Hopewell and is the play-by play voice for Hopewell High School Boy’s Basketball and Football.  These games can be heard locally on WHAP 1340 AM and 96.9 FM, on the internet through FoxSportsRadio1340AM-WHAP, and Toll Free on your phone at 605-313-0571