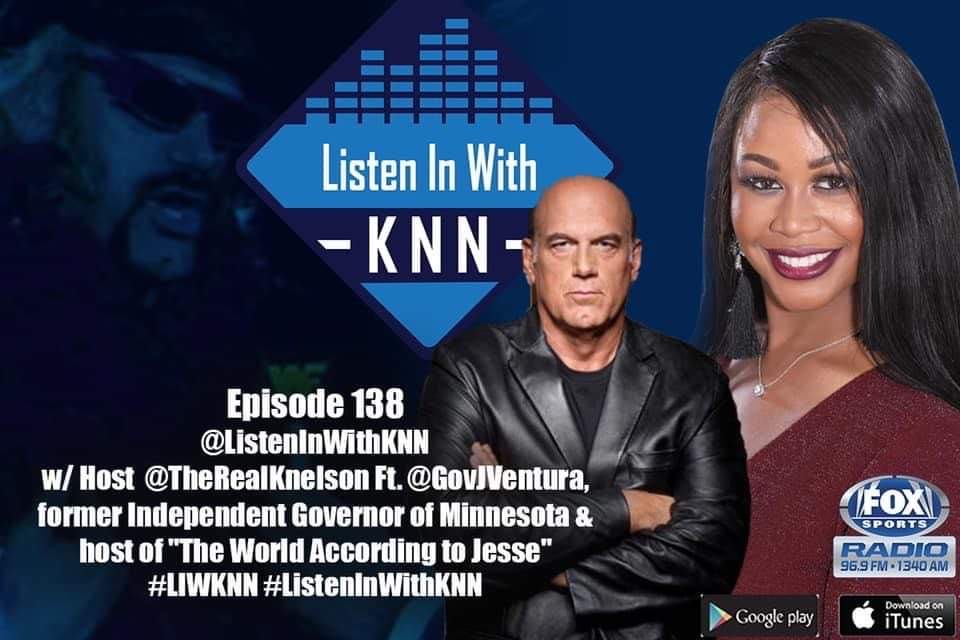 On the latest episode of Listen In With KNN on Fox Sports 1340AM, host Kelsey Nicole Nelson welcomed the 38th Governor of Minnesota and the host of “The World According to Jesse” Jesse Ventura to the show.

Speaking of his home state, the death of George Floyd took place in Minneapolis as a police officer had his knee on his neck for almost nine minutes. That sparked huge outrage and worldwide protests as another African American person was killed at the hands of law enforcement. According to Ventura, it’s another case of the United States living in denial.

“We’re hiding behind the curtain and we like to portray ourselves as being upstanding in everything we do like foreign policy and the number one country in the world. We do have our major problems because the politicians and the government like to keep the curtain shut. Mr. Floyd’s death pulled the curtain completely open this time maybe for good,” he said.

Similarly, Ventura has been bringing attention to another marginalized group of people. He has been protesting with the Native Americans for decades when the Washington Football Team plays the Vikings because of their nickname, which stands for genocide.

“When I was marching, a young Native American came up to me and showed me a newspaper article from the Winona Minnesota Paper back in the 1860’s and the headline of the article was ‘Governor (Alexander) Ramsey Raises The Bounty On Redskins.’ You could go out and kill innocent Native American families and bring their skins back for 200 dollars a skin,” he said.

Ventura didn’t realize the extent that white privilege had in his life until one of his close friends told him a story that many people of color can relate to.

“One day he told me about driving one night in Minneapolis and told me if it’s after dark, I pull out my driver’s license, car registration and my insurance in different places so that if I’m pulled over, I’m not seen reaching for anything. I sat back and looked at my friend and said you gotta be kidding me,” he said.

As a Vietnam War veteran, the ex-Mayor of Brooklyn Park is a huge supporter of peaceful protests as he too is a protestor himself. He offers a solution on what the NFL can do about the Washington and Colin Kaepernick situations.

“The first thing they can do to remedy this is change the Washington Football nickname. Second, we move to (Colin) Kaepernick. I view Kaepernick like I do my idol and hero as they did the same thing to him. I grew up as a young man and there was a gentleman from Louisville by the name of Cassius Clay who later became Muhammad Ali,” Ventura said. “They took his prime away for three years as he was not allowed to fight as the World Heavyweight Champion because of a political stance on the Vietnam War. That was in his heart and he did not want to fight.”

He jokingly suggested that the name be the Washington Crooks because of the people in government.