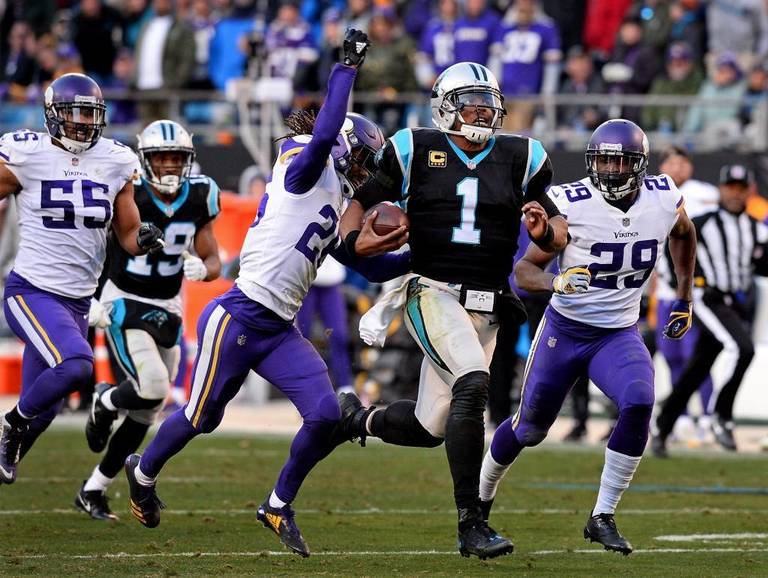 A 60-yard score by Jonathan Stewart woke up the Panthers running game, that had been missing for most the season. He started the game with a bang, as Carolina ended the Minnesota Vikings’ eight-game winning streak winning 31-24.

All aboard the Stewart Train

The team as a whole rushed for 216 yards, Stewart carried the ball 16 times for 103 yards and three touchdowns.

“I knew I was ahead of everyone,” he said. “I was like Usain Bolt.”

This was Stewart’s first three-touchdown performance in his career.

Back in Week 9, the 30-year-old Stewart experienced another first – his first game with two lost fumbles. It provided extra ammo to critics who thought Stewart’s best days were behind him, but Stewart responded.

Head coach Ron Rivera stuck with him, literally right after the fumble trouble and in subsequent weeks.

“We didn’t doubt him. That’s why we kept putting Jonathan out there,” Rivera said. “We believe in who he is for us.”

The defense played well, beginning with the Worley interception and continuing on the Vikings first drive of the second half with a strip sack of Case Keenum by Mario Addison and the coinciding fumble recovery and return from safety Mike Adams.

Four plays later a Graham Gano field goal pushed the Panthers lead to 24-13 midway through the third quarter. Following a missed Vikings field goal and lull from the Panthers offense, that included another opportunity forced by a third Keenum turnover, Minnesota came roaring back.

The Vikings got a touchdown and two-point conversion, then intercepted Cam Newton setting up an opportunity to take the lead from the Carolina six-yard line. A third-down sack from Kawann Short forced a tying field goal with 3:07 to play.

Newton scampered 62-yards just before the two-minute warning putting Carolina into field goal range with an opportunity for the win. Instead of having to rely on Gano, Stewart found paydirt for the third time in the game.

Both of the Panthers starting corners came up with picks after not having a single pick by a CB all season. The defense sacked Case Keenum six times and kept him rattled all day.

In a matchup where Carolina needed to win to keep pace for the postseason, the Kalil brothers had revenge on their minds.

Ryan, the five-time Pro Bowl center who has battled a frustrating neck injury all year, was playing for the first time since Week 7.

“I’m very, very happy for Matt,” said head coach Ron Rivera, who called on Matt and fellow former Viking Captain Munnerlyn to break down the team in the postgame locker room. “A lot has been said, written and talked about this week, and as I said last week and before, I’ll say it again – the guy is getting better and better at what we do.”

Despite a really difficult matchup, Devin Funchess still showed up today with three catches for 59 yards and a TD. Two of his catches were pivotal, as one set up a Jonathan Stewart rushing TD and the other was a score of his own as Cam Newton kept the play alive and found him in the endzone.

Everything remains in play for Carolina after this victory with three regular-season games to go.

A first-round playoff bye and at least one home playoff game is possible. So is falling out of the playoffs entirely – although Carolina now has a one-game advantage over both Atlanta and Seattle (each 8-5) for the final wild-card playoff spot following Sunday’s results.

The victory pulls Carolina even with New Orleans in the division but having lost twice to the Saints will need some help to pull ahead.

The Panthers face the Packers at home next week, in a game where Aaron Rodgers could potentially return. This was a huge win, but the NFC wild-card race continues despite this. The Panthers still need to win a few more to push into the playoffs.