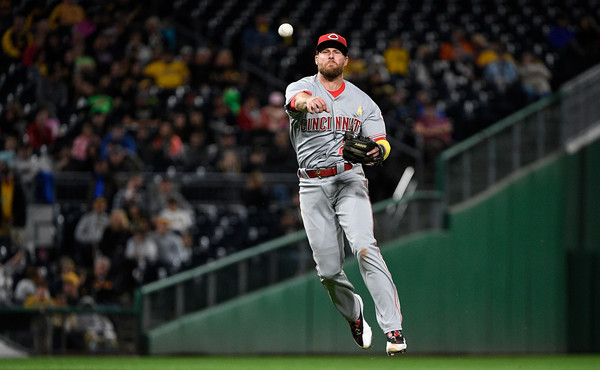 The Los Angeles Angels are clearly doing their best to return to the postseason for the first time since 2014, and you can hardly argue that they won’t do it given the pieces they’ve put together.

First, they signed Justin Upton to an extension.Then they signed one of the best international players maybe ever, a two-way threat that can throw 100 and hit tape measure homers. His name is Shohei Ohtani.

Now in the last two days they have traded for All-Star second baseman Ian Kinsler and signed All-Star Zack Cozart, who will presumably play third base.

But we also thought that when the Padres acquired a ton of talent back in 2015. That offseason San Diego brought in the same Upton as well as Craig Kimbrel, James Shields and Derek Norris to play with Wil Myers and Matt Kemp.

The Padres went 74-88 that year, and of all those players, Myers is the only one that remains in San Diego.

Steamer projections predict that of all the players on the Angels only Trout, Calhoun, C.J. Cron, and Upton will have a wRC+ over the league average number of 100.

Now before the Angels fans show up in my mentions on Twitter let’s get something straight, the Padres did not have nearly the same amount of surrounding talent that the Angels do. They didn’t have a Cron, a Garrett Richards, a Luis Valbuena etc. And they didn’t have the best player in the league.

This is just a word of caution to the Angles fans thinking that they are guaranteed to go to the World Series. The American League still goes through the reigning champion Houston Astros. That doesn’t even take into account the Cleveland Indians, who were in the World Series in 2016 and won 22 straight games in 2017. Let’s not forget the New York Yankees who just added last year’s National League MVP to an already-talented roster that features Aaron Judge and Gary Sanchez.

I think the Angels will be good, I think they will contend for a Wild Card spot just as they did in 2017, and a fully healthy Trout plus a full year of Upton will help that. The thing is we just don’t know exactly what Ohtani can do yet, we don’t know if Cozart’s 2017 was a fluke, and we certainly don’t know if the Angels rotation will hold up seeing as Richards, Tyler Skaggs and Andrew Heaney have all had issues staying on the field.

On paper this is a really good team, a team that could definitely make some noise if everything goes right, and if that’s the case 100 wins isn’t crazy to think. But more realistically, Ohtani will have some adjustments to make all year, Cozart is going to regress at least somewhat, and Simmons is not going to be the same force with the bat, 85 wins seems realistic with a shot at 90 even.

This is going to be a really fun team, a team that will be worth watching despite their late games. It would be foolish to say the Angels are not a good team but they are hardly a proven commodity yet. They aren’t done yet either, the rotation could use another starter or two and quality innings-eaters like Lance Lynn and Jeremy Hellickson are available.