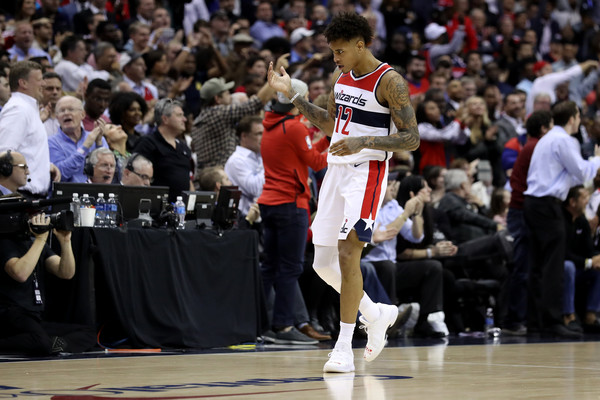 WASHINGTON  —  Kelly Oubre had to fill the starting role tonight. His teammate, Jason Smith, was out with a sore shoulder.

Oubre struggled from the field, going 1-of-5 overall with four points, but the versatile swingman remained active grabbing clutch rebounds late in the fourth quarter to help the Wizards improve to 2-0.

“I brought some energy, the offensive game wasn’t really going my way,” Oubre said postgame. “All I could do is control what I can control. Try to control my energy on the defensive end and get rebounds and try to get the stops that the team needs.”

Oubre was the only starter who wasn’t in double-digits tonight, however, he did have seven rebounds and two steals — proving that he’s taken the next step in his development by being a factor on the floor even when his shot wasn’t falling.

Nevertheless, Oubre is confident in his ability to knock down a shot regardless of his performance against the Pistons.

“I feel good at all times,” he said. “It’s just some more things about the opportunity. You see it go through the net once your rhythm gets flowing and everything goes your way.”

The Wizards had their hands full with the Pistons the entire game. Initially, Detroit had two 30-plus point quarters.

However, Washington held them to only 16 points and scored 33 points in the third quarter. The Wizards led by as many as 15 to start the fourth, but then they allowed Detroit to come back into the game when they went on a 14-0 run.

“Yeah they just went on their run,” Oubre said. “The Pistons are a great team and they did a great job in exploiting our weakness.”

Detriot shot 43% from downtown, knocking down 10 of their 23 three-point attempts. The Wizards allowed the 76ers to do the same thing on opening night, an area Oubre says the team needs to improve on.

John Wall in a league of his own:

Wizards franchise point guard finished the night with 26 points, going 8-of-12 from the field and knocking down 9 of his 11 free-throw attempts.

Wizards coach Scott Brooks continues to be amazed by the All-Star guard, saying Wall does things athletically point guards aren’t supposed to do.

Even Oubre at times is left speechless by Wall’s theatrics, including his monster rejections.

Wall had two blocks and one of them came late in the game which turned into offense for Bradley Beal, as the momentum of the game started shifting in Washington’s favor.

“It’s incredible,” Oubre said. ” He times it up perfectly. Everything he does is routine because he’s been blocking people his whole career.”

Wizards are 2-0 early in the season and will head to the West Coast this weekend to prepare for a four-game road trip.