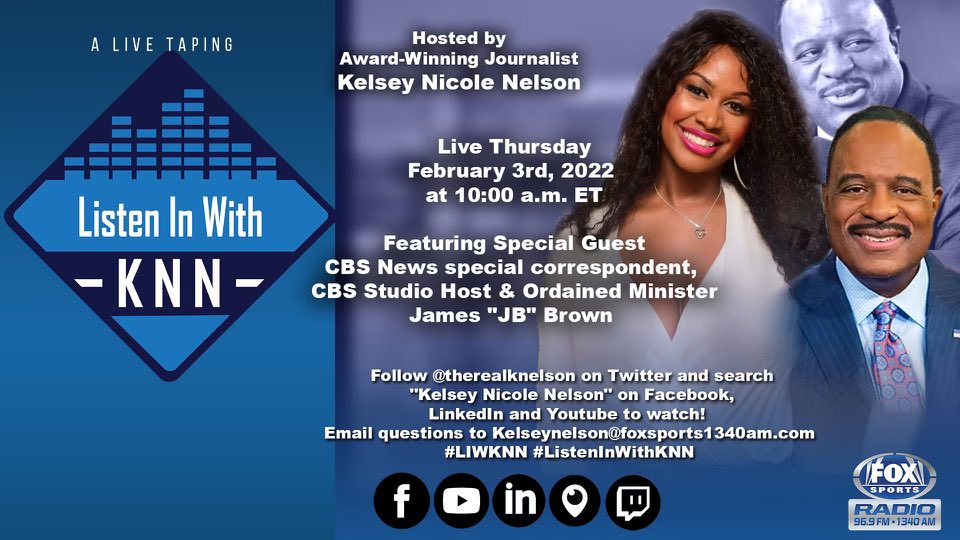 On this special edition of “Listen In With KNN,” sports talk radio show/podcast presented by FOX Sports Radio 1340 AM/96.9 FM, host and executive producer Kelsey Nicole Nelson welcomed special guest James “JB” Brown to the show. Brown is a CBS News special correspondent, and longtime CBS Studio Host, who is known for coming into our homes every Sunday during the NFL season as the lead presenter on “The NFL Today.”

Brown is a Washington, D.C. native who graduated from Harvard University in 1973. He was drafted into the NBA by the Atlanta Hawks that same year but did not play in the league since he was cut from the team. Despite that obstacle, he decided to move forward and pursue his professional career, starting with Xerox. Today, Brown is a three-time Emmy award winner and has covered football for over four decades. Last year, he was inducted into the prestigious Sports Broadcasting Hall of Fame.

During the first quarter of this year, there were many headlines involving the NFL. One of the biggest stories involved the retirement of two football quarterback greats Ben Roethlisberger and Tom Brady.

Big Ben played 18 seasons in the NFL all with the Pittsburgh Steelers and won two Super Bowls. Brown personally knew Roethlisberger while he was in college and interviewed him back then. “You don’t see this often. One team. 18 years. Old school style of game…He had that blue-collared mentality that’s synonymous with Pittsburgh,” said Brown.

Brown also spoke about Brady’s greatness and what set him apart. Brady was the 199th overall pick in the 6th round of the 2000 NFL Draft. And by 2002, he had become a Super Bowl champion. Today, Brady has seven Super Bowl rings, five MVPs, and is arguably the greatest player of all time. Brown was not surprised when he heard that the GOAT was hanging his helmet up. “John Madden, God bless him, used to say, ‘If you’re thinking about retirement, then you are in retirement,” said Brown.

Brown highly praised Brady for the tremendous career he had. He noted that most of the great players are known for physically oriented talent or skills, yet this wasn’t the case for Brady. “Tom was not fast, he didn’t look the part. As a matter of fact, he did look like he should’ve been anything other than a football player,” said Brown. Brady was able to put his mind to it, while having a strong offensive line, running backs, and wide receivers to match his passion. “Football is perhaps the ultimate team sport,” said Brown.

Although this is an end of an era for the two quarterback powerhouses, Brown and avid football fans are certain that the league’s young quarterbacks are promising stars. Quarterbacks like Patrick Mahomes, Josh Allen, Joe Burrow, Justin Herbert, and Lamar Jackson, have what it takes to make themselves a name that will be talked about for years to come. “It is in great hands with some superb young talent that is showing they have every bit of what it takes to make the game as exciting as an NFL fan would want it to be,” said Brown.

The other headline that shook the NFL was the lawsuit that former Miami Dolphins head coach Brian Flores filed against the NFL, and three of its franchises: the New York Giants, Miami Dolphins, and Denver Broncos. The class-action lawsuit was filed on February 1st, coinciding with the first day of Black History Month, alleging racial discrimination. All teams involved and the NFL denied these allegations.

During Super Bowl LV last year, Brown reflected on the lack of diversity when hiring minorities in the NFL. Brown expressed that the message from a year ago still rings true today. “As you talked about before, I am decidedly a Christian minister so the answers I believe are biblically rooted and it quite simply, it is so fundamental. Treat your neighbor, love your neighbor as yourself. Let’s not run away from the fact that there are preconceived notions that are still evident today, passed on, taught on, and impacting people,” explained Brown.

Brown feels that the NFL should be checking its blindspots just as it is done within the game on the field. “We all know that a tree is known by its fruit. You can’t deny that. So if one says that in whatever industry, they’re serious about providing one of the best workplaces out there and equality of opportunity. No one is asking for equality of outcomes,” said Brown.

On the morning of February 5th, Commissioner Roger Goodell sent a memo to all clubs in regards to the league’s commitment to diversity, equity, and inclusion, per Adam Schefter. In this letter, Goodell admits that “we must acknowledge that particularly with respect to head coaches that the results have been unacceptable.”

Brown believes that everyone should be assessed fairly and given the chance if their work proves them to be qualified. “Present the opportunity because excellence is not unique to one group and be fair in assessing that…if you say you believe something, then there ought to be substantive evidence, proof in the pudding that your actions substantiate what you say is core to your principles and the way you’re going to conduct things,” said Brown. “2 Corinthians 13:5 says, ‘Examine yourself to make sure that you are walking in the faith’.”

With both Brown and Nelson having ties to the DMV area, Nelson and Brown also discussed the new name of Washington’s football team, the Washington Commanders. Brown has voiced his opinion about the former name since 2014 because of its derogatory nature. “There’s got to be more than just a name change. Yes, the name change, from my humble perspective, is one that I embraced because I talked to a number of leaders of significant sized Native American populations,” said Brown.

Others in favor of the former name claim that there are groups who are not offended by it and a name change would erase the history of the team. “There’s not a homogenous attitude or reaction to the name change of mascots which many feel is derogatory,” explained Brown.

Further explaining his rationale and positioning on the new name, Brown also said that the team sent him representatives years back to try and convince him that certain groups of Native Americans didn’t have a problem with the name, but he did not change his mind. “Is it painful and hurtful to a sizable number of people? It comes down to that, and if I’m going to love my neighbor as I love myself and see through their eyes, then that was the decision that I made. So yeah, the name change is good. Now, we want to see the team win,” Brown said.

Washington team owner Dan Snyder has stayed in the headlines as he battles more claims of sexual assault and the legal battle continues. Brown also wants Washington’s team culture to change in terms of how people of color and women are treated but expressed that the change should also occur in all organizations.

Staying on the topic of football, the duo wrapped their conversation previewing Super Bowl LVI happening on Sunday, February 13th at SoFi Stadium in sunny Los Angeles. Brown is very excited to see the matchup between the Cincinnati Bengals and home team Los Angeles Rams.

When asked about his pick on who will win it all, Brown said, “Many people may slam me, but because I realize how seriously these players and coaches take it when somebody picks against them or picks for them, so I’m going to never choose a winner other than to say the great storylines that exist.”

Brown commends quarterback Joe Burrow for leading and inspiring the team as well as head coach Zac Taylor. He points out how the Bengals have risen to success the old-fashion way, by maximizing on draft picks.

On the other hand, Brown notes how the Rams “put all their chips on the table” and found the missing pieces, such as wide receiver Odell Beckham Jr. and outside linebacker Von Miller. Rams quarterback Matthew Stafford also wants to disprove the narrative that surrounds his name.

He thinks that fans should not sleep on the Bengals and is looking forward to it playing out on the field because of the phenomenal football we’ve seen this postseason.