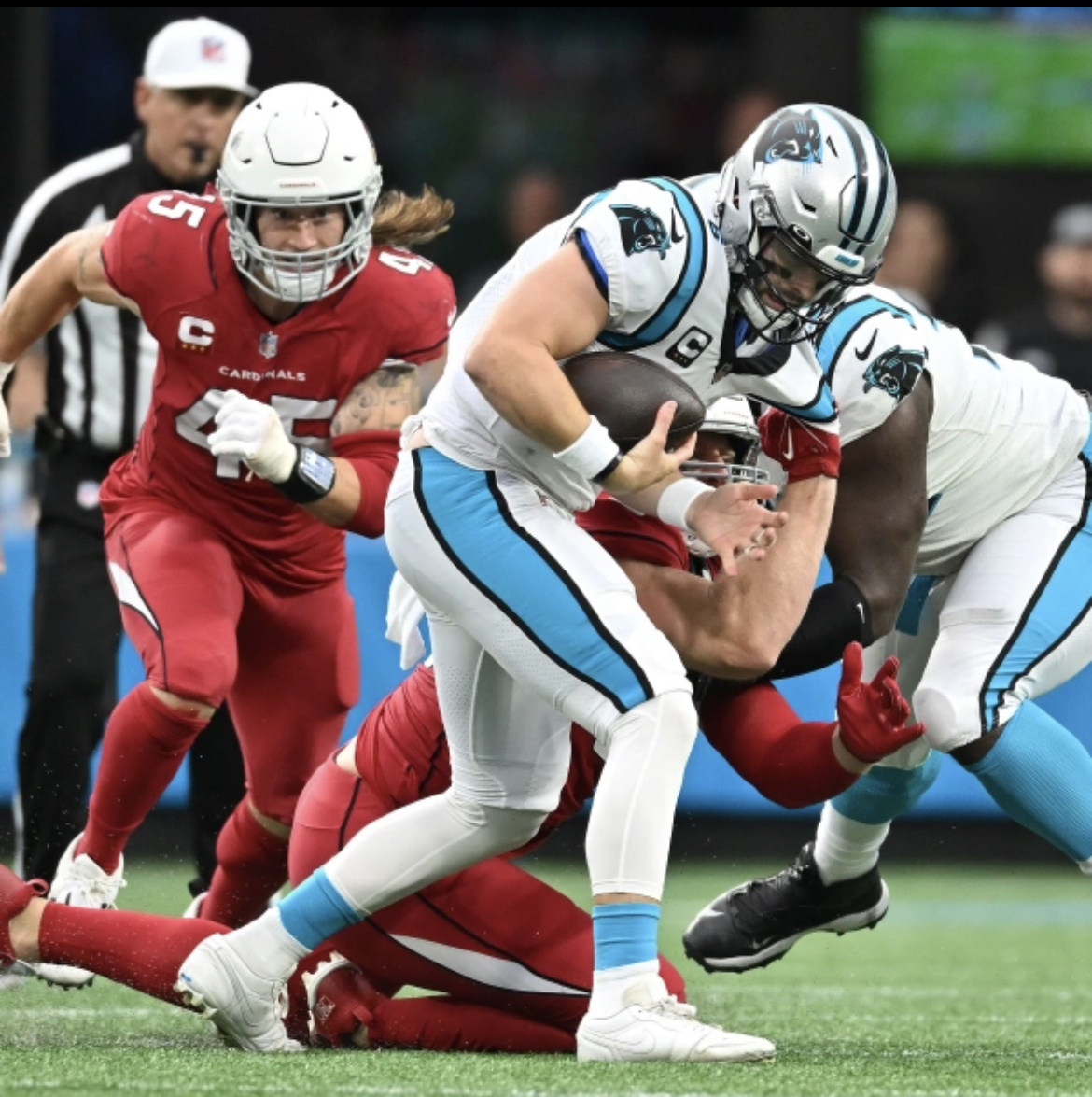 The Carolina Panthers offense hasn’t been able to find its rhythm through the first three weeks of the season and Sunday’s game presented the perfect opportunity to do so. Instead of taking advantage of the league’s 30th ranked pass defense and dead last third down defense, Carolina’s offensive struggles continued. With 11:22 left to play in the game, Baker Mayfield only had 106 passing yards. Efforts to get DJ Moore involved were visible, yet the team struggled to maintain a drive.

Carolina’s first offensive series ended in their own territory after a gutsy call to go for it on 4th & 1 from their own 39 resulted in a turnover on downs. For the second week in a row, defense put the Panthers on the board as linebacker Frankie Luvu intercepted Kyler Murray and took it 33 yards for the score and an early 7-0 lead. The Panthers’ first third down conversion didn’t come until almost 8 minutes into the second quarter; then they turned it over on the very next play. Rashard Higgins got his first touch as a Panther but the handoff to him from Mayfield was fumbled and Arizona recovered. The Cardinals capitalized on the turnover and scored their only points of the first half on a 33 yard field goal by Matt Prater. On the next offensive possession, Mayfield threw the first of his two interceptions when Jalen Thompson stepped in front of a pass intended for  Moore. The Cardinals were unable to generate any points off this turnover and a 54 yard field goal by Eddy Pineiro as time expired sent the Panthers into the locker room with a 10-3 lead.

Coming out of the break, a pass interference call against CJ Henderson put the ball on the 6 yard line and the Zach Ertz caught a 2 yard touchdown pass to tie things up a few plays later. Carolina’s offensive struggles continued as Mayfield could only muster 106 passing yards through the third quarter. Arizona used a 9:26 drive into the fourth quarter to march downfield, but ending up settling for a 39 yard field goal by Prater. The score gave them their first lead of the game with 11:22 left to play.

From there, the game was pretty much over even with so much time left to play. Mayfield has continued to struggle with passes tipped and batted down. JJ Watt got his hands on one and Dennis Gardeck came down with the interception, returning it all the way to the 5 yard line to set up first and goal. Murray’s four yard touchdown run capped the drive and Arizona had a 20-10 lead with 10:26 left in the game. At this point, the Panthers had only played eight offensive snaps since the intermission. Their next possession after the Murray score resulted in a turnover on downs on their own 31 yard line after a head scratching play call on 4th & 1. The Cardinals took advantage of the short field as Murray found Marquise Brown in the end zone for a 22 yard score. The two-point conversion attempt failed and the score sat at 26-10 in favor of Arizona. Carolina made one last gasp for air with a nine play drive ending with a pass from Mayfield to McCaffrey over the middle for a 13 yard touchdown with 4:47 left in regulation. The two point conversion attempt failed leaving the score 26-16 which would be the final. Mayfield finished 22-of-36 for 197 yards, two interceptions, one touchdown and a rating of 61.9. Murray, his counterpart, finished 23-of-32 for 207 yards, two touchdowns, one interception, and a rating of 96.7. McCaffrey was Carolina’s leading receiver with 81 yards and added another 27 yards on the ground. Brown led all receivers with six catches for 88 yards. The win was Kingsbury’s first over Rhule at the NFL level. Carolina falls to 1-3 and hosts San Francisco next week while the Cardinals improve to 2-2 and will have their work cut out for them next week as they host the undefeated Philadelphia Eagles.