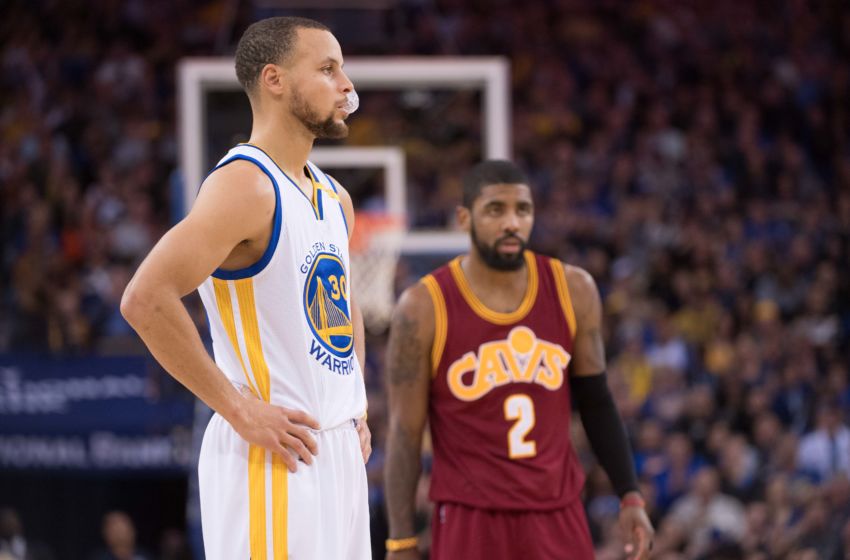 After two games in Oakland, California, Kevin Durant and the Golden State Warriors find themselves feeling fairly comfortable with a 2-0 lead in the 2017 NBA Finals. Now the focus turns to the city of Cleveland as LeBron James and the Cleveland Cavaliers look to defend their home court and not sink deeper in a more hollow hole. Can the Warriors come and play their way to a 3-0 lead? Or will the Cavaliers make their presence felt and get a key victory? Time to preview Game Three.

He was viewing the Finals from the couch this time last year, but SF Kevin Durant has been the best player during the first two games of the series. So far, Durant has averaged 35.5 PPG, shot 50% from  the arc, and leads the team in total rebounds with 22. If the Finals MVP trophy was given after two games, Durant will be the runaway winner at this moment. Game Two was also the stomping grounds for SG Klay Thompson, who finally found his shooting stroke and chipped in 22 points. The Warriors have been dangerous this postseason and that has been without consistency from Thompson. Which goes to show how lethal this team is.

The play of the Warriors in Game Two may have received a slight invigoration by the return of head coach Steve Kerr to the sidelines. Kerr had been away from the team since April 19th due to complications of back surgery. Now that their captain is back, the Warriors may be as complete of a team as ever. One of the more popular players in the league, PG Steph Curry, had a fairly quiet 32 points, 10 rebounds, and 11 assists last game thanks to his super talented teammate in Durant, the noticeable performance by Thompson, the return of Kerr.

Of note, Golden State has shot at least 50% of their field goals, at least 40% of their 3-pointers, and at least 90% of their free throws in two postseason games during these playoffs. One of those games so happen to be their last one. A team that is 14-0 during this postseason is hitting on all cylinders.

Everything seems quite familiar to the Cavaliers as well. They were down 2-0 in last year’s Finals to the Warriors as well and ultimately overcame a 3-1 deficit to win it all. This time around, it will take a little more from superstar SG LeBron James, who is averaging a triple double in the Finals (28.5 PPG, 13 RPG, 11 APG). Whatever James draws from within to help the Cavaliers overcome this deficit will be even greater than what he showed in last year’s Finals.

The combination of PF Kevin Love and PG Kyrie Irving are averaging 42.5 PPG but even more is probably needed from the two All-Stars also. Irving personally shot 8-of-23 in Game Two and seemed out of sync for majority of game. Irving is capable of taking the game over but with the versatile Warriors defense attacking, Irving will have to find his groove in a variety of ways.

Many analysts are not counting out the Cavaliers despite the 0-2 dilemma they are facing. Maybe it’s because the team has risen from similar depths before in an all-too-familiar setting. Maybe it’s because the series is now set in Cleveland, where the Cavaliers have been very excellent this season. Or maybe it’s a combination of both. Either way, head coach Tyronn Lue and his team truly have their work cut out for them.

Once again, James and the Cavs find themselves facing insurmountable odds. Going down 2-0 to a 73-win Warriors team last year was one daunting task. Going down 2-0 against a talented Warriors team that now has arguably the 2nd best player in basketball in Durant is a total different circumstance.

In each home game this postseason, the Cavaliers have posted at least 108 PPG. In four of their six home games, they have also shot at least 53% from the field. Scoring is only one half of the equation of the Cavaliers. Defense is where they will win a championship possibly. Allowing the Warriors to find their stroke and knock down 51% of their 3-point attempts as they did is a recipe for disaster for Cleveland.

With Durant leading the way, the Warriors have defeated the Cavaliers with ease. Key role players such as SF Andre Iguodala, PF Draymond Green, and C JaVale McGee give the Warriors the ability to be a lot more flexible, something the Cavaliers have yet to find so far in two games. Role players always play better at home in a more comfortable environment. So guys such as SGs J.R. Smith and Iman Shumpert, as well as C Tristan Thompson will have all eyes on them to step up and give Cleveland’s Big Three a much needed boost.

Both teams have plenty of firepower within the starting lineups. With James and crew in desperation mode, Cleveland will be more likely of the teams to lay everything out on the court. Durant’s hot streak will probably continue and the team of Curry and Thompson will look to continue their ‘Splash Brothers’ moniker. This one however may be a spot where the role players of Cleveland make a greater impact after being pretty nonexistent on the road. Cleveland gets a scrappy win to land a punch within the series.