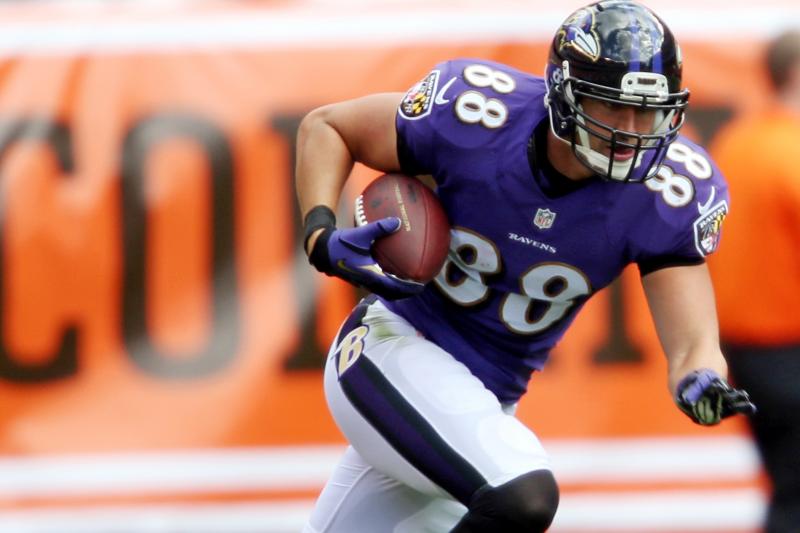 The Baltimore Ravens have made another move today to cut ties with a long-time team member. They are also looking to acquire the services of a new wide receiver.

Injured tight end Dennis Pitta was released from his contract with an injury waiver today. Last week, Pitta suffered the third major hip injury of his NFL career, this time a dislocation.

He led all NFL tight ends in receptions (86) and put up a career-high 729 receiving yards and two touchdowns last season. His loss will greatly affect the way Baltimore’s offense operates, as he was Joe Flacco’s best friend on the team and safety valve. The Ravens have gained $2.5 million in cap space from his release.

Jeremy Maclin’s Visit With the Bills

Baltimore is still looking for free agent wide receiver Jeremy Maclin to visit them today. However, it looks like those plans for a visit will be pushed back by at least a day or two. Maclin has been courted by former Philadelphia Eagles teammate LeSean McCoy to come play with the Buffalo Bills.

His visit with the Bills started on Tuesday and has now extended into Wednesday. If he doesn’t sign with Buffalo within the next few hours, Baltimore could still pounce on the opportunity of signing Maclin.

According to ESPN’s Adam Schefter, Maclin is now leaving Buffalo to visit Baltimore.

Last season with the Kansas City Chiefs, he caught 44 passes for 536 yards and two touchdowns in 12 games. His season was marred by injuries, but he was able to participate in Chiefs OTAs, before being cut.

Another possible move for Baltimore is to acquire the services of New York Jets wide receiver Eric Decker. The Jets will either be trading Decker or releasing him, according to Schefter:

And now the Jets are parting ways with WR Eric Decker, sources tell ESPN. Have told WR they either will release or trade him this week.

Decker has suffered from hip and shoulder injuries in the past. However, he has received a clean bill of health by doctors. This could give the Ravens a boost at the receiver position as well.

As Jets look to see if they can trade WR Eric Decker, he has been medically cleared from off-season shoulder and hip surgery, and is healthy

Decker only played in three games last season, due to the aforementioned injuries. He recorded nine receptions for 194 yards and two touchdowns. If healthy, Decker is a major threat in the offense. In 2015, Decker caught 80 passes for 1027 yards and 12 touchdowns in 15 games, proving that he is capable of being the number one receiver on a team.

CBS’s Jason La Canfora tweeted about a possible move to Baltimore for the wide receiver:

Jets reaching out to teams on Eric Decker, Ravens among them. Not out of the realm of possibility he's dealt. Otherwise he'll bne released

Baltimore will most likely be able to get one of the two receivers, either through trade or free agency.