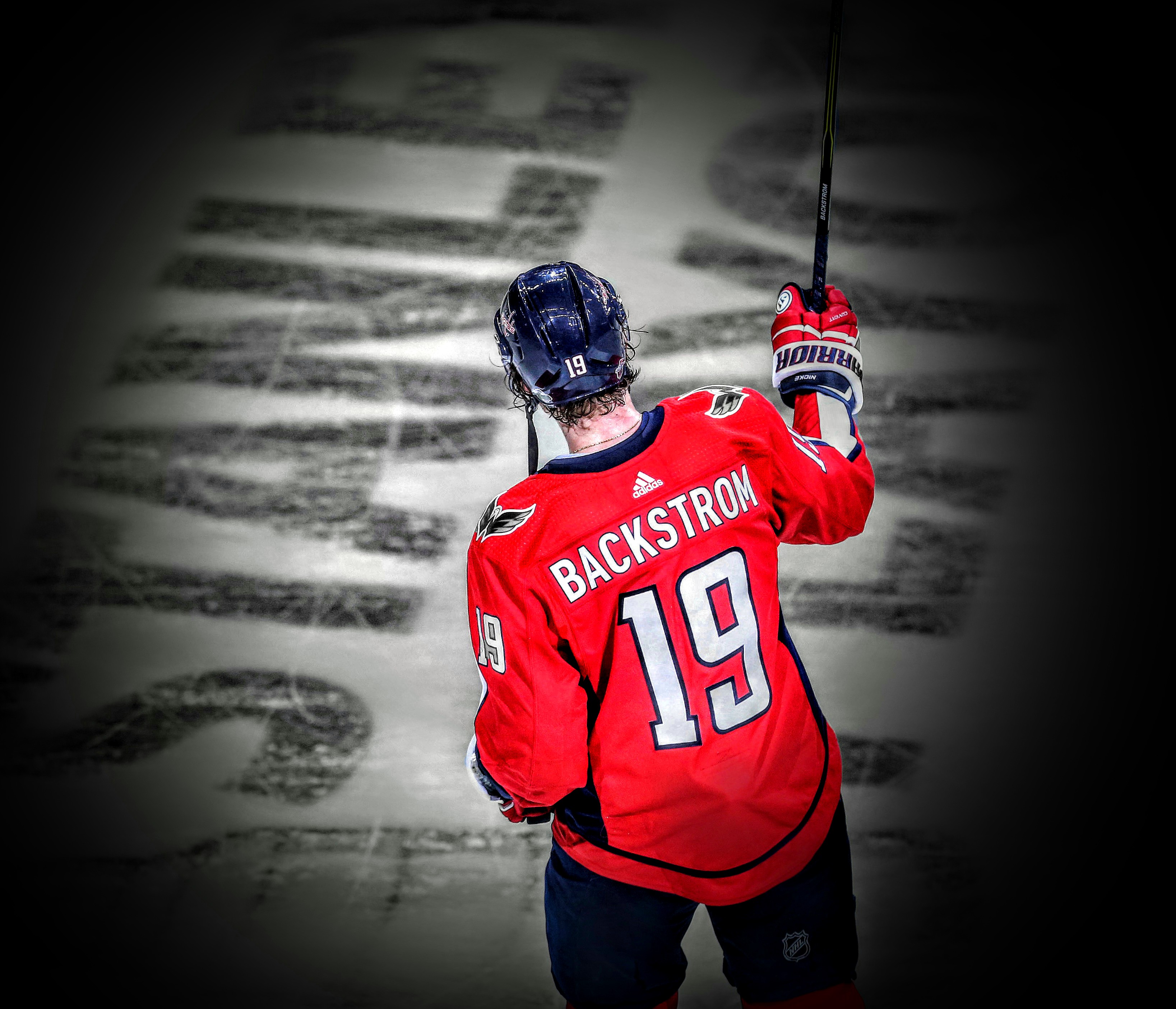 Before you can be a pro at ice hockey, you have to start somewhere. We all have to get advice from resources like Hockey Always, take our first lesson, make our first mistake, and play our first game. There’s no knowing where your hokey might take you. This is certainly true for Nicklas Backstrom. On October 5, 2007, a nervous 19-year-old kid out of Galve, Sweden made his way onto the biggest hockey stage in the entire world. Little did anyone know that they were about to witness the beginning of arguably one of the most underrated playmakers in NHL history.

Born on skates, Nicklas Backstrom learned how to make his way around the ice all on his own at the age of three – the rest soon became history. He was raised by his mother, Catrin, who played professional handball in Sweden and his father, Anders, who was a player for Sweden’s professional hockey team Brynäs IF. Growing up, Backstrom would play with his brother Kristoffer and friends on a rink that their neighbor let them build in a nearby field.

At the age of 16, Backstrom followed in his father’s footsteps and joined Brynäs IF making history. He became the youngest Swedish player to be part of the International Ice Hockey Federation (IIHF) and is also the youngest player in IIHF history to be a member of a winning gold medal team in the World Cup.

“When I was younger,” Backstrom said. “I was ready to try the sport that I was best at but I realized pretty quickly that hockey was my thing.”

And for the sake of the Washington Capitals, Backstrom made the right decision by sticking with hockey. He was drafted 4th overall by the Capitals in the 2006 NHL Entry Draft. The last time a Swedish player went in the top five of the NHL Entry draft was seven years prior when the Sedin brothers were drafted back-to-back in 1999.

Then on that fateful October night back in 2006, Backstrom recorded his first assist as an NHL player setting up Michael Nylander for the first goal of the game against the Atlanta Thrashers.

“That was crazy,” Backstrom said. “I was so nervous to play in front of a big crowd like that, so many people. But it was exciting, I remember that I was pretty nervous, but it went pretty good. We won [3-1] so that was nice.”

Ironically, an injury to Nylander later on opened the way for Backstrom to be promoted to the first line. And so, a playmaking star was born.

Backstrom ended up playing all 82 games his rookie season finishing 9th in assists among centers with 55. He ended up receiving the rookie of the month award in December and was named to the NHL’s All-Rookie 1st team by the end of the season.

Since then, Backstrom has put on a show every year his entire career while competing with other centers from around the league who are surefire future Hall of Famers. So let’s take some time to break this down.

(All stats mentioned are among NHL centers during Backstrom’s career.)

In his second year, Backstrom, playing yet another full season, ranked 5th in points with 88. The four centers in front of him? 1. Evgeni Malkin (113, PIT) 2. Sidney Crosby (103, PIT) 3. Pavel Datsyuk (97, DET) 4. Ryan Getzlaf (91, ANA). Backstrom also ended up 3rd in assists with 66 – 11 short of Malkin’s league leading 78. Three of those four players, at the least, are future Hall of Famers and Backstrom was right up there with them in his second season.

For the third straight year, Backstrom played in all 82 games. Something Hall of Fame Swedish player Peter Forsberg didn’t even accomplish (we’ll revisit Forsberg later on). Backstrom ended the season ranked third in points (101) behind Henrik Sedin (112, VAN) and Crosby (109). He also ranked third in assists (68) behind Sedin (83, VAN) and Joe Thorton (69, SJ), both of whom will end up in the Hall of Fame. It was also the same year Sedin won the Art Ross Trophy (top point scorer) and Hart Memorial Trophy (MVP).

Each of Backstrom’s first three years, the Capitals lost two of their three playoff appearances in the first round. But that didn’t stop Backstrom from chasing a Cup elsewhere like players throughout history have done.

The Capitals realized what kind of special talent they had on their team. That’s why, in 2010, they signed Backstrom to a 10-year, $67 million contract extension.

The following year, Backstrom missed 40 games due to a concussion. Yet, he still managed to put up 44 points in 42 games with 14 goals and 34 assists. He returned near the end of the season in March – perfect timing for the Capitals. Their final game of the 2011-2012 season against the New York Rangers was a must win in order to clinch a playoff spot. Well, Backstrom ended up with a goal and an assist in the Capitals 4-1 victory over the Rangers. If the Florida Panthers didn’t win the final game of their schedule, the Capitals would have clinched a division title.

Imagine if they had Backstrom all season.

Despite his concussion in the 2011-2012 season, an underrated trait of Backstrom throughout his entire career is his durability. Disregarding this year’s season, Backstrom has played in every game in seven of the past eleven seasons, including all 48 in the 2012-2013 season when it was shortened due to a lockout. He has also played in two seasons in which he’s played 75 or more games (’11-’12, ’15-’16) and only one season where he missed one game (’17-’18).

The years leading up to 2018 weren’t kind to the Capitals during their quest for a Stanley Cup. After Backstrom signed his contract extension in 2010, the Capitals went on to be knocked out of the playoffs six of the next seven seasons – not even making the playoffs in 2014. But Backstrom was never discouraged because he knew that something special was on the horizon in D.C.

“Me and the team,” Backstrom said. “We didn’t have any doubt in ourselves. It’s just tough. It was a little frustrating. We had to answer the same question over and over again. Like yeah we lost against a good team, we lost in the second round, yada yada yada. It was kind of getting a little frustrating, but at the same time it was the best feeling when everything clicked and when everyone was on board. Everyone was pulling the rope the same way which was probably the best feeling.”

None of the Capitals playoffs woes can be blamed on Backstrom since he was drafted. He has constantly been an elite playmaker throughout most of his career for the Capitals. Backstrom has been ranked in the top 10 for assist among centers in 8 of his first 11 seasons while six of those eight he’s been ranked in the top 3 for assists. And for the 2014-2015 season he led the league in assists.

“I don’t know if I play the same way as my idol but [Peter] Forsberg and all the players from Sweden were my favorite growing up. I thought it was kinda cool that they were in the NHL. You always had a dream that one day you can play in the same league.”

Niklas Backstrom is 9th all-time in NHL history for assists among Swedish players. And he’s the only one of in those top nine that is currently still playing.

Notice a trend on that list of players? Each one of them is either in the Hall of Fame or on the verge of getting into it sooner or later – including Backstrom.

Although, many hockey fans around the world give credit to teammate Alexander Ovechkin for Backstrom’s success since he’s 15th on the all-time goal scoring list. But NBC Sports Washington’s Michael Jenkins doesn’t believe that should be the case.

“I understand,” Jenkins said. “The temptation to put Backy and Ovi together as a duo in order to compare their collective production to others, but I just don’t think it’s fair to Backstrom. He should be acknowledged as an incredible player without being associated with anyone else.”

As he should be.

After beating the Vegas Golden Knights to win the 2018 Stanley Cup, the first person Ovechkin handed the Cup off to was Backstrom. A special moment NHL history that cements both of their legacies as future hall of famers.

Backstrom is an all-star. He’s a Stanley Cup champion. And he is the playmaker that brought the Washington Capitals their first Stanley Cup. Now all that’s left is a trip to 30 Yonge St. in Toronto, Canada once he retires.

But at 31 years of age and still playing at an elite level, Backstrom still dominates the rink as one of the games most elite playmakers. When his contract is up in two years, and he’s 34-years-old, Backstrom will either decide to hang up the skates for good or continue on an already incredible legacy.