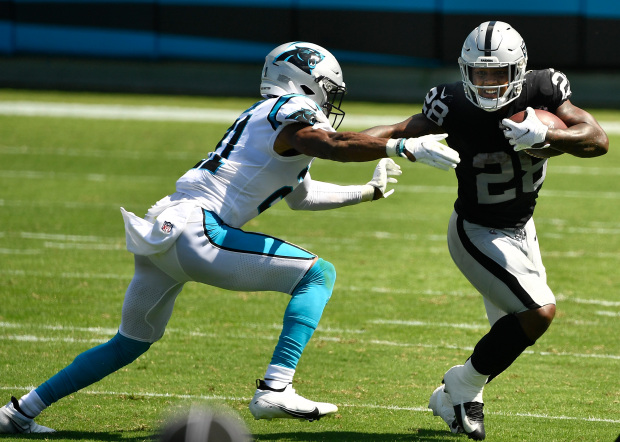 When the Carolina Panthers took the field at Bank of America Stadium for the season opener on Sunday, the team had a new quarterback, new coaching staff, new atmosphere – with no fans; but suffered a similar defeat.  It was the beginning of the Matt Rhule Era and nearly half the team’s first game as a Panther.  Teddy Bridgewater took the field as the season-opener starter for the first time since 2015 and did not disappoint.  Bridgewater finished 22-for-34 for 270 yards and a touchdown and a QBR of 98.9.  That was expected of the 6th year signal caller.  However, when it comes to the Panthers defense, no one knew what to expect at all.

When fans and analysts alike talk about a “rebuild” in Carolina, they most certainly are focused on the defense.  The Panthers only returned three of last season’s starters – Shaq Thompson, Donte Jackson, and Tre Boston.  KK Short returned on Sunday after missing the last 14 of the 2019 season due to a rotator cuff injury.  Although the front four is relatively young, with two rookies and a 2nd year player in Brian Burns  the outlook on this unit was the brightest of the defensive units.  The pass rush was abysmal as Las Vegas quarterback Derek Carr had forever and a day in the pocket; he finished 22-of-30 for 239 yards and a touchdown while avoiding any sacks.  Run support continued to be an area of concern as Raiders running back Josh Jacobs ran over, through, and away from Panthers defenders from beginning to end. Jacob finished with 93 yards and three touchdowns.  There were several missed tackles both in the gaps and the open field.

The already thin secondary took a blow early when starter Donte Jackson left the game with an ankle injury.  Rasul Douglas was solid when called into action; he had a big pass breakup to end a fourth quarter Raiders drive and keep the Panthers in striking distance.  Rookie safety Jeremy Chinn had an impressive debut, finishing with 8 total tackles.  Pride Jr. was right behind him with 7 total tackles while vet Shaq Thompson led the defense with 12 total tackles.

From the time of his hiring, there has been much anticipation for offensive coordinator Joe Brady’s system and the way he would utilize weapons like Curtis Samuel, Christian McCaffrey, DJ Moore, Robby Anderson, and Bridgewater.  The Panthers scored on the opening drive; it was a field goal, but still a score nonetheless.  In addition to avoiding an empty drive, Panthers fans got to see the versatility they have been expecting.  Over the course of the game, Bridgewater targeted seven different receivers.  McCaffrey was only targeted four times – a far cry from last season where he was often targeted more than the receivers.  While Bridgewater was pretty conservative, it was his 75 yard scoring strike to Anderson that kept the Panthers in the game.

Brady was sure to mix up the calls, but whenever the Panthers offense appeared flat – enter McCaffrey.  Efficient and consistent, McCaffrey finished the game with 96 yards and two touchdowns.  There were mixed feelings about Brady’s play calling throughout the game but no play was more critical than a late game 4th & 1 down where the ball was given to fullback Alex Armah and the Panthers were stopped; effectively eliminating any chance at victory.  Many were left scratching their heads at the fact that McCaffrey didn’t get the call, including Rhule.

“It is a great question.  I’m not second-guessing anyone.  That’s a head coaching decision type thing.  To me, that’s something I have to think about walking away from this.  But we have confidence in all of our players.  We have confidence in our plays and that inside of a yard, that sort of fullback belly/quarterback sneak, that’s kind of the world we are in.  It had worked before so we thought it would work again.  I think when you write up who to blame for that, I think the one person you can blame is the head coach.”

All in all, with no preseason games and a modified training camp, the team seems to be pretty excited about the season ahead.  Bridgewater stated after the game that he is excited about a group that is going to get better each week.  “You watch guys on the sideline when things don’t go well and no one is dropping their heads, everyone has their chin up high and with that what’s next mentality.  It is a group of guys who just fight, have that underdog mentality and I’m just excited that we have this group, a group that is going to continue to just get better each week throughout this league.”

The Panthers have no time to dwell as they prepare for their first NFC South division match up of the season.  Carolina travels to Tampa next week to take on Tom Brady and the Buccaneers – fresh off a loss to the New Orleans Saints.