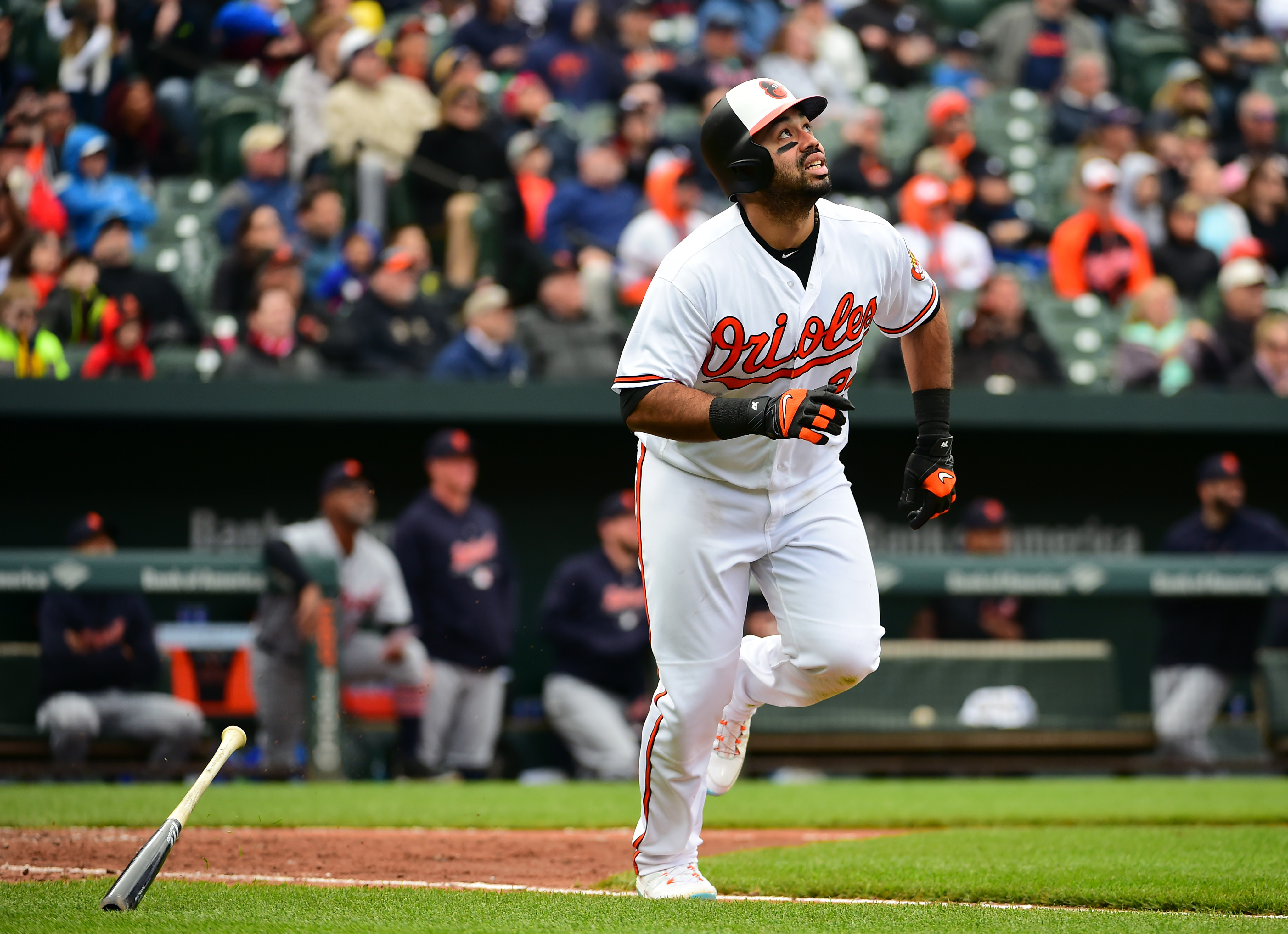 In his last start, Gausman eight innings, allowing two runs (two earned) on four hits, while walking one batter, striking out seven batters. During that start, he struck out the side in the seventh inning on nine pitches, which gave him his first “immaculate inning” of his career. It was Gausman’s third quality start of the season.

Gausman started off the game getting Jose Iglesias to pop out to second base. Next, Gausman would walk Jeimer Candelario. Candelario would advance to second base on a Miguel Cabrera groundout. After Cabrera’s groundout, Gausman struck out Nicholas Castellanos to end the top of the first.

Trey Mancini stepped to the plate for the Orioles to lead things off and he would homer on a 2-0 pitch. It was his third home run of the season and first leadoff home run of his career (first of the season for Baltimore). The solo shot would put Baltimore up 1-0. Jace Peterson would fly out to center field for the first out, then came Adam Jones with a pop out to right field. Manny Machado came up next, drawing a walk off of Norris. However, Anthony Santander would strikeout, stranding Machado at first base.

It would be more of the same for Gausman in the second inning, beginning the inning with a Victor Martinez line out to right field. Jacoby Jones would then fly out to center field. Tigers catcher John Hicks would then be struck out by Gausman to end the first half of the second inning.

Joey Rickard would make his second start of the season, this time in outfield. He would connect on a softly hit single, that landed in right field. Pedro Alvarez, who took the place of Danny Valencia in the lineup, would hit a two-run home run to center field to put Baltimore up 3-0. It was Alvarez’s fifth home run of the season and he’s now second on the team in home runs. Craig Gentry would pop out to right-center field for the first out. Caleb Joseph would be hit by a pitch and Mancini would walk, but Norris would strike out Peterson and get Machado to ground into a fielder’s choice at second for the final out.

In the top of the third, Gausman allowed a leadoff single to Victor Reyes in right field. Gausman would strike out Dixon Machado for the first out of the inning, but would then allow a double to a double to Iglesias. When rounding third, Reyes would be caught in a run down to prevent the Tigers from scoring. Candelario would then ground out for the third out.

Baltimore would start the bottom of the third with Jones at-bat. After Jones flew out to right field, Detroit opted to remove Norris from the game due to injury. Right-handed reliever Alex Wilson would take his place on the mound. Norris would end his day going 2.1 innings, allowing three runs (three earned) on three hits, while striking out two batters and walking two batters. He allowed two home runs in the game. Wilson would immediately get Santander to line out to left field and Rickard to ground out to short.

Cabrera would start the fourth inning by grounding the ball to Alvarez at third base. Alvarez would make the throw over to Mancini, pulling him off of the bag, but Mancini recovered to tag out Cabrera. Alvarez would have another ball hit to him by Castellanos with his thrown nearly pulling Mancini off of the bag again, but Mancini stuck his foot at first for the second out. Gausman would walk Martinez next. Jones would ground the ball to Machado, who made the throw to Mancini at first for the third out.

Alvarez would begin the bottom of the fourth by grounding out. Gentry would then ground out to third for the second out. Joseph would then pop out to shallow right field for the third out.

Gausman would allow his first run of the game to Hicks on an 0-1 pitch, with the score being 3-1. He would then strike out Reyes, get Machado to ground out and then get Iglesias to ground out.

Before the bottom of the fifth began, Niko Goodrum would enter the game for Cabrera, who left the game with a left biceps spasm. Mancini would ground out up the middle to Iglesias. Peterson struck out next. Machado would hit a hard, line drive single to center field off of Wilson. Jones would pop out to right-center field for the last out of the fifth.

With Candelario grounding a ball into the shift in right field, Alvarez made a diving stop and threw to Mancini, but it was just a tad late, with Candelario reaching first on the single. Goodrum would then ground out to Mancini would stepped on first for the out. Candelario would advance to second base. Castellanos flew out to Rickard in left field for the second out. Gausman would then walk Martinez and load the bases with an infield single from Jones. After that, Gausman’s day was done, with Brad Brach entering the game for him in relief.

Brach would strike out Hicks, leaving the bases loaded. Though Brach was no longer in his closer’s role, the matchup was favorable towards him. Coming into his matchup against Hicks, right-handed batters were hitting .158 against Brach, with never facing him. Brach hadn’t pitched in the sixth inning since 2016.

Gausman’s final line on the day was 5.2 innings pitched, allowing one run (one earned) on five hits, three walks, four strikeouts and one home run. He threw 106 pitches, for 66 strikes.

“I feel like I had pretty good fastball command right out the gate,” said Gausman. “Just tried to watch what [Chris] Tillman did the other night. As the game went on, he threw a lot more off-speed. That was kind of something that I wanted to do.”

Buck Farmer entered the game in relief for Wilson, with Santander leading off Baltimore’s half of the sixth inning with a single. Then, Rickard would walk to give Alvarez a runner at first and second during his at-bat. Though Alvarez would strike out, Gentry would deliver with an RBI single to score Santander with Baltimore leading 4-1. Farmer would strike out Joseph and Mancini to strand Rickard and Gentry.

Daniel Stumpf would enter the game for the Tigers in the bottom of the seventh inning, allowing an eight-pitch walk to begin the half. Machado would then draw a five-pitch walk for himself, advancing Peterson to second base. Jones would then strike out against Stumpf and Santander would pop out to right field. Baltimore would get a double steal with Hicks throwing to third late. They wouldn’t be able to capitalize, with Rickard striking out to end the inning.

With Givens entering the game for Brach in the top of the eighth inning, Brach went 1.1 innings, allowing two runs (two earned) on three hits, while striking out three batters. Givens would begin his day with a five-pitch swinging strikeout of Martinez. Jones would hit a deep fly ball to left field, but Rickard would get under it for the second out. Hicks then stung a line drive into the gap, but Gentry ran under it for the third out.

Joe Jimenez entered the game for Detroit in the bottom of the eighth in relief of Stumpf. He too would allow a home run to Alvarez, his second home run of the day. Joseph made a heady play, with Jones missing the diving catch in center field. When Jones was slow to get the ball, Joseph ran to second and got the double. Trey Mancini would strike out, but Joseph reached third on an E5. However, he would stick there after two consecutive outs to end the inning.

“I always trust in myself and my abilities,” said Alvarez of his two-home run day and start at third base on short notice. “No matter the situation, no matter if I’m doing well or not doing well. Like I said many times before, you can’t control the results and you can’t control that I have four home runs in three games.

“By the same token, you can sometimes control the 0fers. But, I put myself in the best position to succeed every time I take a pitch. I’ve been fortunate enough to be able to do it consistently the last couple of days. When you can do that consistently, over and over, you will get the results every time and that’s all I really plan on doing – just planning on giving myself the best chance to succeed pitch-to-pitch.”

Darren O’Day entered for Givens in the ninth inning. Givens went one inning and struck out a batter in the eighth. O’Day struck out Leonys Martin, who entered the game for Reyes. Machado would be the next batter to strike out against O’Day. Lastly, O’Day would get Iglesias to ground out for the final out of the game, securing his second save of the season.

Valencia was scratched from the lineup with hamstring tightness. He is day-to-day.

It was Alvarez’s second multi-HR game of the season, with his last coming Friday night against the Tigers. Sunday’s multi-HR performance is the 15th of his career. He has extended his current hit streak to three game (since April 26), batting .417 (5-for-12) with four home runs, five runs and six RBI during that span.

Mancini is batting .305 (25-for-82) in 19 games leading off this season. He has hit safely in eight of six career games against Detroit.

Gausman allowed his fewest amount of runs (one) of the season in Sunday’s game.

Santander’s single in the sixth inning has extended his hitting streak to a career-high four games. He is averaging .438 (7-for-16) with a double, triple and scoring five runs during that stretch. He has batted .308 (4-for-13) in five career games versus Detroit.

Rickard’s single in the second inning gave him his first hit on the year since being recalled from Triple-A Norfolk. He has hit safely in three of his last four games against the Tigers since August 5, 2017.