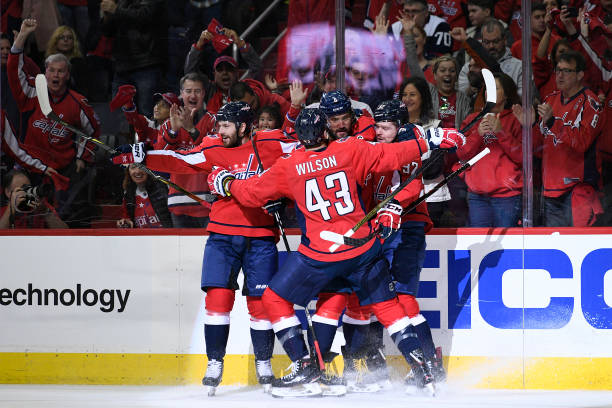 The Penguins are not the Columbus Blue Jackets; with that said the Caps knew going into game 2 they could not afford to fall into another 0-2 series deficit.

Alex Ovechkin scored his 7th goal of the 2018 Stanley Cup Playoffs just 1:26 into game 2. This was the second time in as many games that the Caps scored in the first minute and a half of the game. The Capitals have now scored first in all but one of their 8 games this postseason.

Heading into Sunday’s game the Penguins had successfully killed their last 15 penalties. That streak came to an end with 5:06 remaining in the first period on a Jakub Vrana‘s first goal of the playoffs. Lars Eller and Braden Holtby provided the assists on the power play goal that gave the Caps a 2-0 lead.

Washington out-shot Pittsburgh 20-10 and won the hits category 15-9 in the first 20 minutes.

Brett Connolly‘s breakaway goal just over 2 minutes into the second period gave Washington a 3-0 lead. Eller collected his second assist of the afternoon on the Connolly tally.

Dmitry Orlov and Patric Hornqvist got into the first fight of the series and both were sent off for roughing at the 11:14 mark of the second period. Penguins defenseman Kris Letang put Pittsburgh on the board during the 4 vs 4 stretch to make the score 3-1.

The Penguins continued to surge through the second period out shooting the Caps 16-6 in the period but failed to score again.

The third period was highlighted by a controversial no goal call with 10:57 remaining in regulation. Hornqvist snuck the puck underneath the skate of diving Holtby on the goal line; however no call was initally made on the ice. Referees took about five minutes to review the play as a goal would have made the score 3-2. There was an angle found during the broadcast that showed the puck to have crossed the goal line; it is unknown whether or not the angle was made available during the video review.

You're the referee: goal or no goal? ?

Five penalties were called in the final 8 minutes of the game including a double roughing call on Hornqvist and Devante Smith-Pelly with 1:43 remaining in regulation. Nicklas Backstrom scored on an empty net with 7 seconds remaining to give the Washington Capitals a 4-1 game 2 win. Eller tallied his 3rd assist of the day on the empty-netter; Tom Wilson was credited with an assist as well.

One of the keys to Sunday’s contest was Caps head coach Barry Trotz moving a more defensive-minded Backstrom to the starting line against Sidney Crosby; in place of the offensive-minded Evgeny Kuznetsov.

Today’s game 2 marked the first time this post-season the Capitals successfully held a two goal lead at home. Braden Holtby finished with 32 saves in the win.

Washington has now successfully killed their past 22 straight penalties. The last power play goal allowed by the unit was back in game 2 of the first round.

Pittsburgh’s Brian Dumoulin left Sunday’s game with a head injury; his status is uncertain for game 3. Evgeni Malkin is expected to make his series debut as the teams move on to Pittsburgh for game three. Meanwhile Carl Hagelin‘s status is currently uncertain as he remains out with an upper body injury.

Game 3 will be in Pittsburgh Tuesday night at 7:30pm.