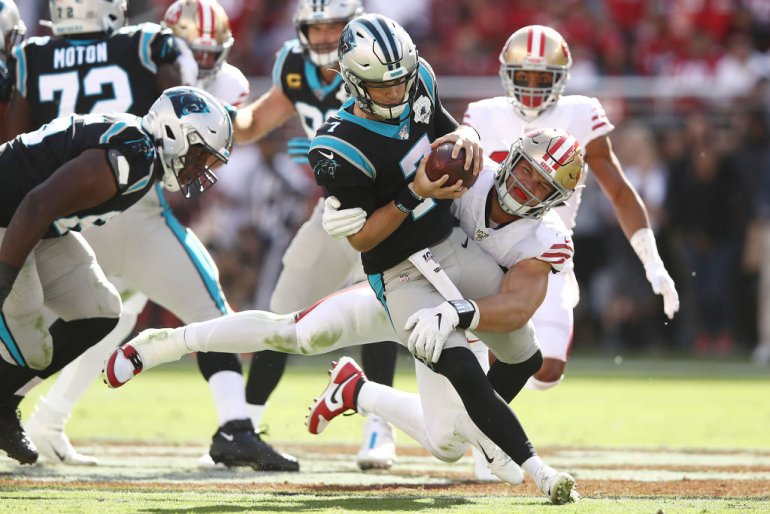 Lots of storylines preceded Sunday’s game between the undefeated San Francisco 49ers and the surging Carolina Panthers. Niners head coach Kyle Shanahan has resurrected the franchise in his third at the helm and the Panthers were riding a four-game win streak into Levi’s Stadium. After Panthers head coach Ron Rivera declared Kyle Allen the starter amid rumors surrounding Cam Newton’s return from injury, the focus shifted to the strong defensive units that both teams boasted heading into Week 8. Coming into Sunday’s game, San Francisco averaged 223.5 yards allowed; good for second in the league. They also averaged 10.7 points allowed, also good for second in the NFL. As for the Panthers, their 27 sacks on the season were the league best.

Another storyline, not mentioned as much, was the Niners’ acquisition of wide receiver Emmanuel Sanders from the Denver Broncos. Reports stated that Shanahan and Co. were adamant about having Sanders in time to face the Panthers. With limited time to get into the playbook, it was unknown how much of an impact Sanders would have. That question was answered early as the Niners capped off their opening drive with a 4 yard touchdown reception by Sanders after targeting him three times on the drive. The Panthers answered with a 41 yard field goal by Joey Slye for their only points of the first half.

Rivera stated early in the week that “it all starts up front”, referencing not only the Panthers rejuvenated pass rush but also that of the 49ers. The Panthers defensive line, riding high after a string of highly productive games, could not contain the run game as former Falcons running back Tevin Coleman ran wild. At the half, Coleman had three touchdowns and 101 total yards from scrimmage – more than the Panthers as a whole.

Allen struggled, throwing his first interception of his NFL career en route to 1 61.2 quarterback rating in the first half. The Niners defensive front feasted, sacking Allen six times before halftime. The only brights spots on Carolina’s defense were an interception by Luke Kuechly and a sack by Eric Reid as they went into the half trailing 27-3.

Panthers edge Bruce Irvin looked to shift the momentum with a safety to end San Francisco’s first drive of the second half. Christian McCaffrey, who was quiet in the first half, broke a 40-yard touchdown run early in the third quarter. After a successful 2-point conversion, the Panthers trailed 13-27. Those would be the last points of the day for Carolina.

The Panthers continued to give up chunk plays, with Deebo Samuels scoring the touchdown from 20 yards up to extend the Niners lead 34-13. Later in the third quarter, Allen threw interceptions on back to back drives, one to Richard Sherman and one to Nick Bosa. Sherman returned the interception to the Panthers 10 yard line. A defensive pass interference call against Carolina safety Eric Reid placed the football at the 1-yard line where Coleman punched it in for his fourth touchdown of the day. Bosa showed off his athleticism returning Allen’s third interception 46 yards to the Carolina 9-yard line. San Francisco capitalized on the turnover with a field goal to grow the lead to 44-13.

49ers running back Raheem Mostert capped off the scoring with a 41 yard touchdown to make the score 51-13. Jimmy Garoppolo finished with 18/22 for 175 yards, two touchdowns, and two interceptions while being sacked three times. Coleman picked up 118 total scrimmage yards and four touchdowns. In his toughest game to date, Kyle Allen finished 19/37 for 158 yards, no touchdowns, and three interceptions en route to a quarterback rating of 28.9. Christian McCaffrey finished with 155 total scrimmage yards and the Panthers lone touchdown. Bruce Irvin led the defense with two sacks and three tackles for a loss.

The 49ers remain undefeated at 7-0 while the Panthers fall to 4-3 and will host the Tennessee Titans next Sunday at Bank of America Stadium.