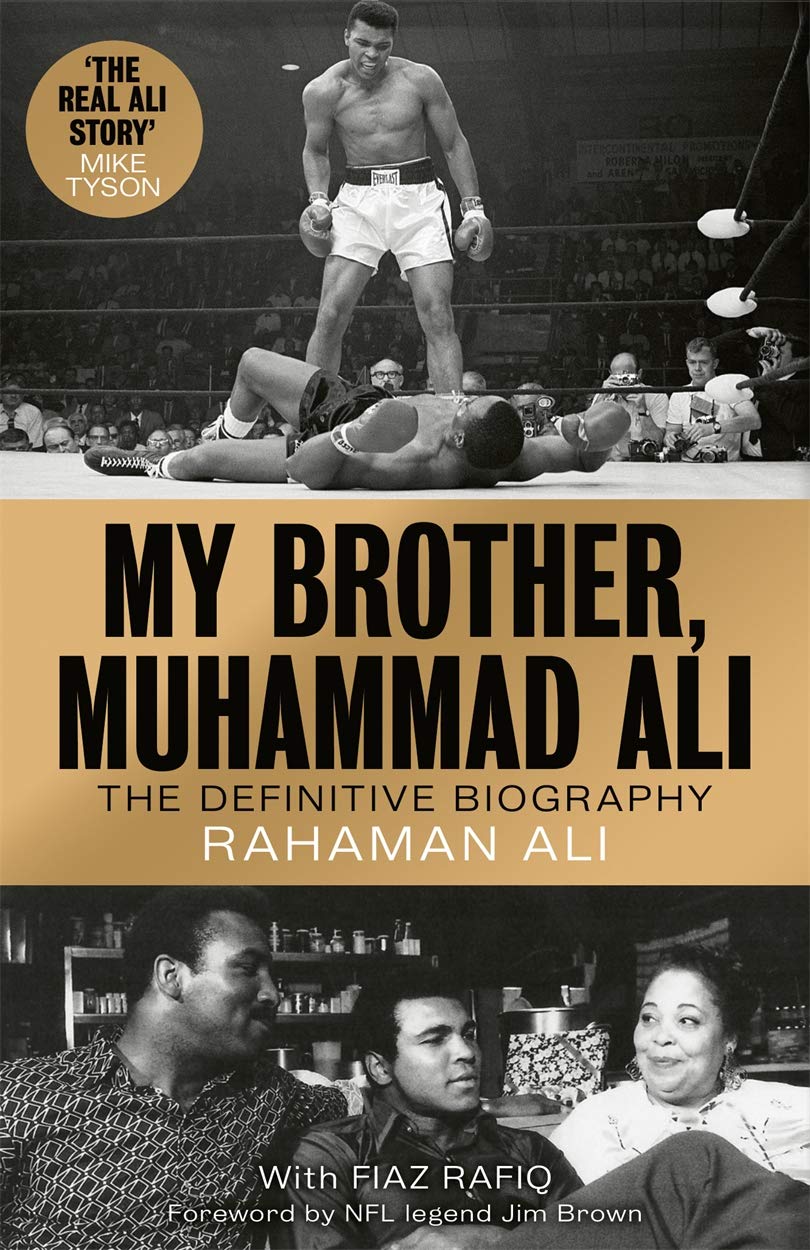 The life and times documenting “The Greatest” Muhammad Ali have been recounted throughout a plethora of multimedia formats ever since his bombastic, ever-charismatic arrival as the world’s most-loved and cherished sportsman. However, with the much-anticipated and thoughtfully sincere release of brand new memoir entitled “My Brother, Muhammad Ali”, Rahaman Ali, Muhammad Ali’s singular sibling and closest lifelong friend, artfully revisits and candidly recollects unprecedented and highly poignant tales of his late-great brother beyond the mere parameters of the public persona and professional sports icon.

The everlasting close-knit brotherhood between Muhammad and Rahaman Ali was an unbridled relationship that illustrated an unbreakable bond, a profound loyalty and a love undiluted and undying until the end of time. The innate connection and loving camaraderie witnessed both Muhammad and Rahaman grow up together, live together, train together, travel together and indeed compete both in the street and boxing ring together.

The heart-warming, multi-faceted and hard-hitting “My Brother, Muhammad Ali” comprehensively details Rahaman’s highly eloquent and vividly powerful voice and storytelling ability to share with the world quite like no other biographical release on Muhammad Ali prior.

Dean Perretta: Rahaman, can you talk about the critically heralded “My Brother, Muhammad Ali” and the overall creative and healing process when creating this very insightful and highly definitive memoir?

Rahaman Ali: Yes. When you talk about the creative and healing process of writing a book on the most famous sportsman who also happened to be your own brother, your only sibling, it’s very emotional for me to be honest. I am an emotional person and whenever I look at photos of my brother Muhammad or reflect back on his life and career, I start to cry. But it was an absolutely wonderful experience because when I look back at the good times, the hurdles, the fun times we both had together, it gives me a sense of joy. My longtime memory is OK but short time memory has started to fade. I am glad I wrote the book now before my memory really slipped.

Dean Perretta: Regarding “My Brother, Muhammad Ali”, “The Baddest Man on the Planet”, “Iron” Mike Tyson said, and I quote, “Rahaman has, at last, written the definitive biography on his late brother, which tells the real Ali story”, whereas the legendary George Foreman also stated that the memoir is “The real life of the Great One”. However, with that being said, what does it mean personally to receive such positive kudos from the aforementioned Professional Boxing icons?

Rahaman Ali: Let me tell you something, and please remember this, the two gentlemen you just mentioned have always loved my brother and showed the ultimate respect. Mike (Tyson) is a great man who not only has good things to say about Muhammad behind closed doors, but he has always in public expressed his sincere words and put my brother on a pedestal. George (Foreman) is just a sweetheart. He is a mammoth in the world of boxing but still feels Muhammad was in another league, a league of its own, not just as a boxer but also beyond that. In fact, George says to talk about Muhammad, as the great boxing champion is a putdown. He believes Muhammad was much bigger than boxing. I agree. Furthermore, Mike and George made history themselves in the sport of boxing. Mike was the youngest and George was the oldest to ever win the heavyweight crown. They both earned it.

Dean Perretta: How imperative was it to essentially leave no stone unturned in “My Brother, Muhammad Ali” and, of course, finally set the record straight on any preconceived misconceptions about Muhammad’s life and times, both professionally and personally?

Rahaman Ali: I feel I had to cover a lot of ground to really encapsulate Muhammad’s life into a tome of 400 pages. Initially, the idea was to gravitate toward Muhammad Ali the man and refrain from going into a lot of the boxing career. However, after contemplation, I felt to do justice to the book I had to write the definitive biography – A to Z with a personal touch which makes this book stand out from all other biographies. Although Muhammad’s career in boxing had been written about countless times, I had my perspective because I was there to witness it. Furthermore, Muhammad lived ten lifetimes compared to the average man, and there were anecdotes and intriguing stories that had never really been shared before in the public domain. A lot of fans are interested in learning about a celebrity in regards to what he likes, dislikes, what was he like at home, etc. behind the public persona, and I think it’s part and parcel of any memoir or biography to cover this ground as well as the professional career.

Dean Perretta: What do you feel ultimately separates “My Brother, Muhammad Ali” from the countless volume of biographies and memoirs which have previously been released detailing “The Greatest”?

Rahaman Ali: Over the decades there have been many books written on Muhammad. Some good and some of them were not so good. Now, you tell me how many biographies can you find on my brother written by his family member? Without sounding egoistic, I was the one human being that knew Muhammad more than anyone in this world. I was his closest family member. From growing up together as kids to being his best sparring partner. We were best friends and you will not find anyone disputing this fact. So, back to your question, what makes this book different to others is the first-hand source – me. If you want to learn about Muhammad Ali how he spent time behind closed doors, with his brother and family, and kids, to what he liked and disliked, and his fears behind the scenes to boxing stories from the personal perspective of the man closest to him then this book is for you. Muhammad had his own battles behind the scenes that have never been written about nor known by the public. And I felt compelled to share these with the world. You see the thing with Muhammad is he not only appeals to boxing and fight fans, but he transcends sport and people from all walks of life are fans of his. All types of people are fascinated by his life story and his story is more than just about the boxing ring. And to this end, I ensured the most intimate and definitive biography ever written on Muhammad Ali would appeal to the masses. Michelle Obama, who has sold millions, are you telling me only fans of politics bought her book? By the way, President Obama adulates my brother and I respect him profoundly for sharing a video tribute in the White House when my brother passed away.

Dean Perretta: Lastly, where can the audience purchase the incredible “My Brother, Muhammad Ali”?

Rahaman Ali: This book is currently available in bookstores throughout the UK in hardback.  Additionally, it is available online at Amazon UK.  As for other regions of the world, it’s my understanding that it will become available in Australia 1 December 2019 and it will be coming to the USA sometime in 2020.