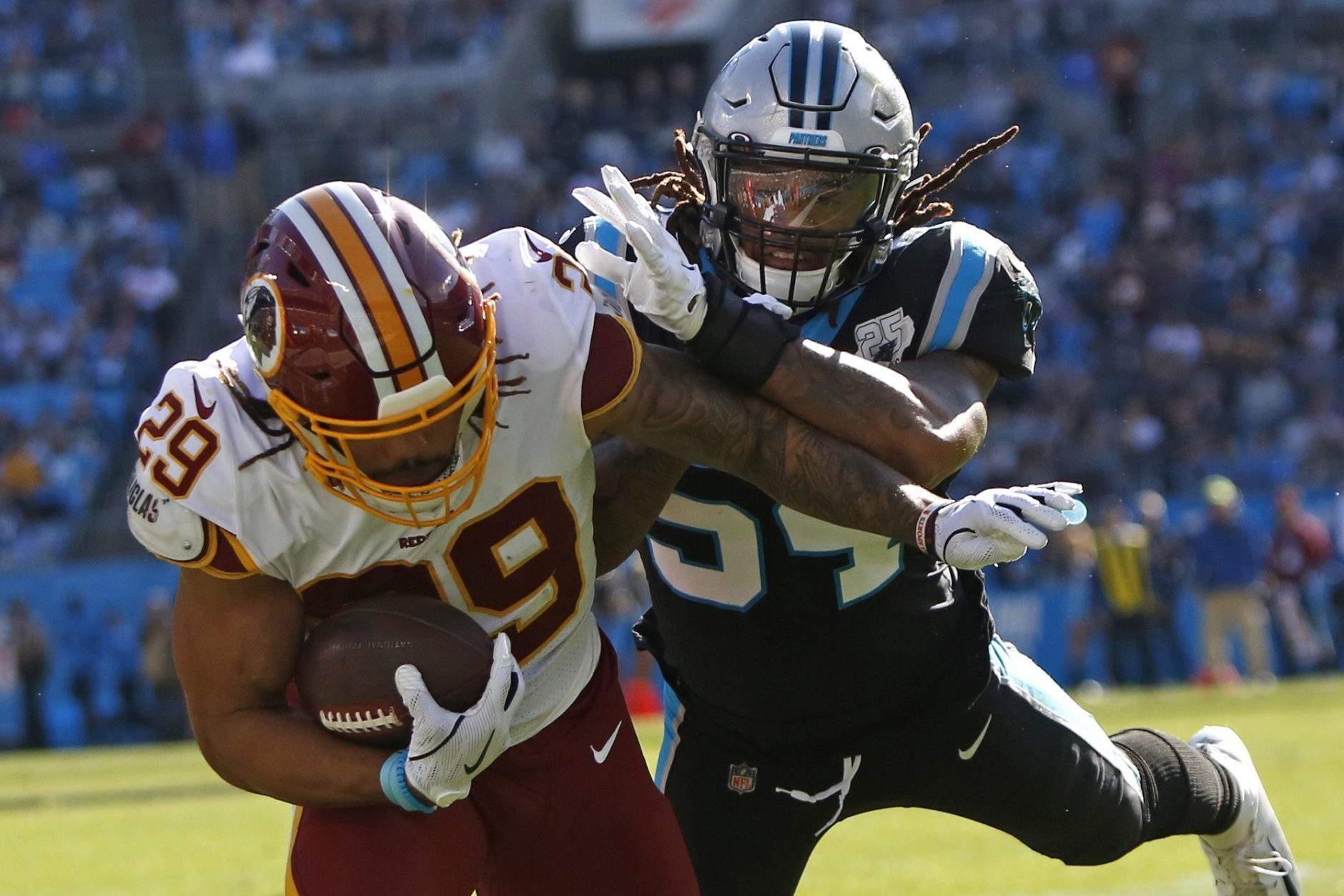 On the heels of a tough last-second road loss to the New Orleans Saints, the Carolina Panthers came out blazing on Sunday. Hosting the 2-9 Washington Redskins, the Panthers scored touchdowns on their first two possessions en route to a 14-0 first quarter lead. They would not see the end zone again until quarterback Kyle Allen scrambled from 17 yards out with 1:54 left in the fourth quarter.

After falling behind early, the Redskins took advantage of the weakest link in the Carolina defense: the run defense. Running backs Derrius Guice and Adrian Peterson gashed the Panthers for a combined 228 rushing yards. Ranking near the bottom of the league in rushing, the Redskins gained a total of 248 rushing yards and scored three touchdowns. The damage was not confined to the ground; the Panthers also gave up several chunk plays over the middle as well.

Despite not playing their best football, the Panthers found themselves in familiar territory as the game clock wore down – in the red zone with a chance to tie and force overtime. After Allen’s rushing touchdown to bring the Panthers within 8 points, linebacker Jermaine Carter, Jr. recovered the onside kick to give the Panthers another shot with 1:51 remaining in the game. The Panthers drove 51 yards with DJ Moore being brought down at the 1-yard line after a 21-yard reception. That was as close as the Panthers would get with Christian McCaffrey being stopped for a loss on back to back plays. Next, Allen threw an incomplete pass intended for DJ Moore and was sacked for a loss of 23 yards to end the drive and the Panthers hope at forcing overtime.

For the fourth time this season, the Panthers have had the ball within five yards of the goal line with the game on the line. For the fourth time this season, they came up short. When asked about red zone frustrations, Panthers head coach Ron Rivera said, “We do some really nice things, get ourselves into position and we just miss the opportunities. This is the fourth game we were down there and we’ve had a chance and that is a hard pill to swallow.” McCaffrey has been having an MVP-caliber season but was rendered ineffective for the most part. Rivera said that can be chalked up to the team performing poorly on first down. “Again, when you don’t have success on first down, you put yourself at second and long. That makes it tough on the play caller. Again, we have to be able to do a little bit better. We have to put us in a better situation on second down.”

The Panthers offensive woes extended beyond the red zone as Allen was sacked seven times. The offensive line has been a unit dogged by injury the past couple of seasons and losing guard Greg Van Roten for the season last week did not make things easier.

“We struggled, obviously, but again, with some new pieces in there,” said Rivera. “Guys are trying, again, to give us their best. That’s all you can ask. At the end of the day, when these guys walk out of the locker room, I told them to walk out with their heads up because they are trying. It’s not an easy game. Again, it would be nice to win obviously, but again, like I said, that’s the nature of the game.”

After Sunday’s loss, the Panthers fall to 5-7 on the season and have lost the last two home games to 2-win teams. While not mathematically out of the playoff picture, it will be a tough hill to climb with games against the Falcons, Saints, Colts, and Seahawks looming. The current three-game skid, coupled with owner David Tepper’s comments about not accepting “long term mediocrity”, brings about discussion of what is next for the Panthers.