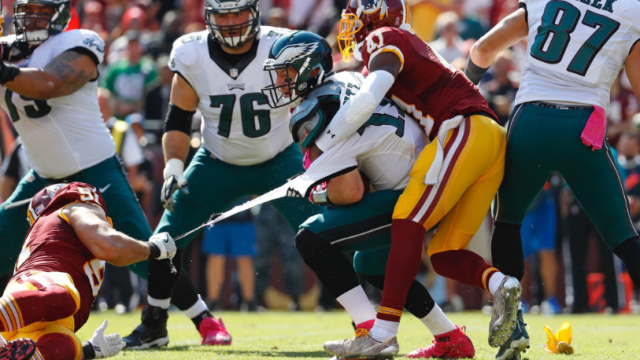 The (6-5-1) Washington Redskins travel to Lincoln Financial Stadium on Sunday to take on the (5-7) Philadelphia Eagles. Leading into this week 14 NFC East rivalry game, both teams are coming off of losses in their week 13 matchups. The Redskins lost to the Arizona Cardinals 31-23 while the Eagles suffered a horrible loss to the Cincinnati Bengals 32-14. The Redskins definitely did not come out to play against the Cardinals last week and if they want to beat the Eagles this week they must come out with all guns blazing on Sunday. If they do not, then expect Carson Wentz and the struggling Eagles offense and their defense to shine on Sunday. The Redskins cannot sleep on the Eagles because they must look to get back on track if they want to keep their playoff hopes alive against the Eagles who have lost five of their last six games. 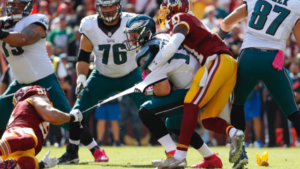 If the playoffs are in Washington’s future, this is absolutely a must-win. After losing to the Cardinals in last week, the Tampa Bay Buccaneers have supplanted them for the last wild-card spot in the NFC playoff race.

The Redskins offense has been the aspect that has carried them for much of the year and while the defense has been solid for the most part, it has been somewhat of a letdown the last two weeks. Defensively, they’ve allowed at least 31 points in both games. The Redskins come into this week ranked 24th in the league in total yards allowed, 18th against the pass, 22nd against the run and 20th in points allowed, giving up nearly 24.6 points per game. The good news is that while the Redskins will be going up against one of the best defenses in the league, they will also be facing one of the worst offenses in the league.

Quarterback Kirk Cousins has had a pretty solid so far. He’s thrown for 3,811 yards, 21 touchdowns, and eight interceptions, with a quarterback rating of 99.6, which puts him eighth in the league. Though Cousins has put up great numbers this year, they have not necessarily lead to wins for his team. Last week against the Cardinals, Cousins completed 21-of-37 passes for 271 yards with one touchdown and one interception. On the ground, running back Robert Kelley rushed for 63 yards on 14 carries while Chris Thompson added 24 yards. On the receiving end, receiver Pierre Garcon had seven receptions for 78 yards, while DeSean Jackson had one catch for 59 yards and Vernon Davis totaled five receptions for 47 yards. Offensively, the Redskins are averaging 25.2 points and 418.6 total yards, while defensively, the unit is allowing an average of 369.6 total yards per game. The numbers on offense look good but they simply do not matter if the team cannot come away with a win. In the words of the famous Herm Edwards “You Play to Win the Game!”

This Redskins defense has to step up this week if they want to keep their playoff hopes alive and it will help if they overcome recent struggles of getting opponents to turn the ball over. They can get a rush on the edge thanks to Trent Murphy and Ryan Kerrigan but they too along with the defense as a whole struggled to get opponents off the field in key situations. Keep a watchful eye on this trend to see if it continues into this week.

Since starting the season 3-0 the Eagles have since gone 2-7 which has pretty much placed them out of the NFC wild-card race. The Eagles are coming off a loss to the Bengals where Wentz completed 36 of 60 passes for 308 yards, one touchdown, and three interceptions. On the ground, Wendell Smallwood rushed for just 19 yards. On the receiving end, Paul Turner had six receptions for 80 yards, while tight end Zach Ertz added nine receptions for 79 yards. Wentz has been very solid this year but their offense just does not have the firepower to keep them in games. Wentz began the year by not throwing an INT in the first three games but since then, he has thrown 10 interceptions in his last seven games. 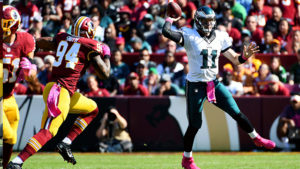 Overall, Wentz has a quarterback rating of 80.1, which is 28th in the league. Wentz and the Eagles offense rank 20th in the league in total yards, 23rd in passing, 10th in rushing and 19th in scoring, while putting up 22 ppg. Though the Eagles do have a very strong defense it appears that they may be wearing down and that is not a good sign if they plan on defeating this Redskins team and their dynamic offense. In their last three games, their defense has allowed nearly 28 ppg and that will not get the job done against teams who have an explosive offense. Overall, their defense is ranked 11th in the league in total yards allowed, 13th vs the pass, 16th vs the run and they are also 10th in points allowed by giving up 20 ppg. The Redskins are a much more talented team but if they come into this game thinking that they have already won then expect this Eagles team to surprise everyone and come out of this game with an upset win.