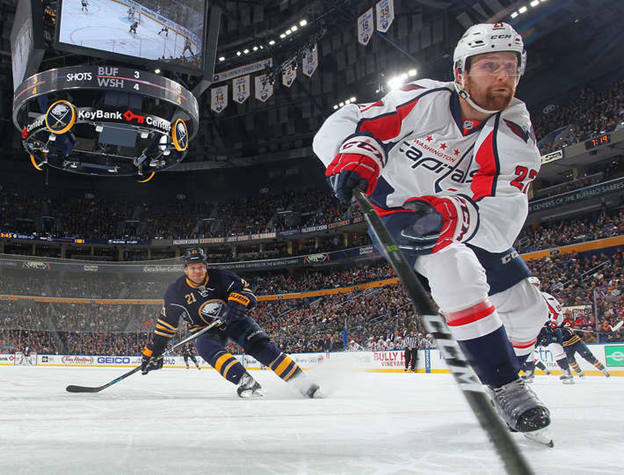 The Capitals scored on two out of their three chances with a man advantage Friday. These goals improved Washington’s power-play scoring percentage to 16th in the NHL. This is up from Dec. 1 when the Capitals ranked 24th in the category.

Washington forward Jakub Vrana scored the first of the team’s two power-play goals. The goal was Vrana’s first in his NHL career.

“I never dreamed how I would score, you know?” Vrana said of his goal, according to The Washington Post. “Just get some shots on the net, and hopefully something’s going to go in.”

The second-period goal gave the Capitals a 2-0 lead.

Washington defenseman John Carlson scored with a man advantage in the third period, putting the Capitals ahead 3-1.

“We have to find a way to get kills,” Buffalo defenseman Cody Franson said, per The Associated Press. “You give teams like Washington chances on the power play, they did a good job for the most part, but the small chances we did give them, they were able to capitalize.”

The goal was Carlson’s first of the season.

Oshie Back in Form:

Oshie scored for the first time since his return Friday. His second-period goal opened the game’s scoring.

“I feel like I’m back to normal,” Oshie said, according to the AP. “My legs got underneath me and I feel like it’s been a long time since I was out.”

The forward also added an assist on teammate Marcus Johansson’s open-net goal with 1:12 remaining in the third frame.

Oshie and Johansson were two of four Capitals to score two points in the game.

Johansson’s goal tied him with captain Alex Ovechkin for the team lead with 12.

Ovechkin has not scored a goal in his last seven games.

Grubauer Holds Down the Fort:

“I’m seeing them back-to-back almost,” Grubauer said, per AP. “Not much time in between, which is really helpful.”

The only score Grubauer allowed Friday came during a third-period power play.

Buffalo forward Kyle Okposo rebounded a shot in front of the net and swiped it in for the goal. At the time, the goal cut the Capitals’ advantage to one.

“I don’t think we did enough to win the game,” Okposo said, according to the AP. “We just didn’t have that extra jam.”

Washington defenseman Matt Niskanen did not travel with the team to Buffalo.

He sustained an upper-body injury Wednesday night against the Boston Bruins. Trotz has not announced if he will play Sunday evening at home.

The Capitals improved to 16-7-3 with their third win over Buffalo in two weeks. However, they are still in fourth place in the Metropolitan Division. They sit one point behind the third-place Columbus Blue Jackets.