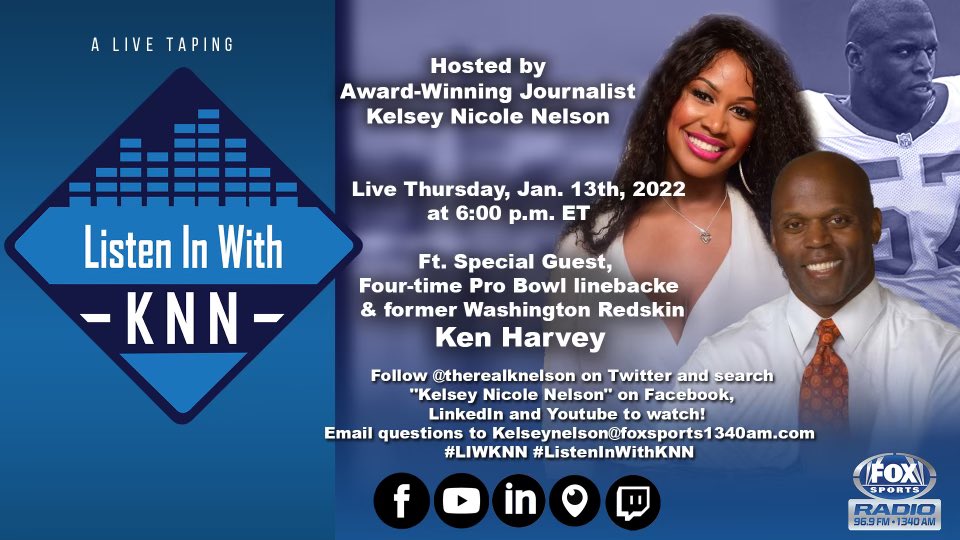 Harvey was selected 12th overall by the Phoenix Cardinals in the 1988 NFL Draft. His belief in himself and support from family around him is what led him to this opportunity. Before this life-changing night, Harvey felt lost and dropped out of high school for a semester.

During that period, he felt that God was speaking to him and told him he had a purpose and destiny for his life. “When you start having a belief, then you can make a difference,” said Harvey.

During the interview, Harvey also expressed that football was a release for him as a child who grew up as an introvert. “A lot of quiet, insecure kids don’t know how to communicate so they express everything in anger…that’s what I did,” said Harvey. “Football is a game that you get patted on the back for knocking somebody out.”

Harvey credits his junior college football coach with pushing him and his teammates to enroll in a public-speaking class. Through the speech class and his wife’s teaching, Harvey has learned how to communicate with other people.

Following his time at Laney Junior College, Harvey attended the prestigious University of California, Berkeley, where he was a first-team All-Pac-10 pick his senior season. Today, the Ken Harvey Award is given annually to a California Golden Bears football player that shows academic commitment and improvement throughout the season. “Sometimes you don’t realize how fortunate you are,” said Harvey.

Harvey is a native of Austin, Texas, and growing up in Dallas Cowboys country, he grew up in a family of diehard Cowboys fans. Even with the Cowboys fandom lineage, Harvey never played a down for the Dallas Cowboys and instead found himself in Washington, Dallas’ rival, playing with them from 1994 to the start of the 1999 season. “The coolest moment of my life was when I got the chance to play against the Cowboys and to get a sack,” said Harvey.

Harvey is a four-time Pro Bowl selection from 1994 to 1997 and when he took his family to the Pro Bowl with him, his dad was starstruck. “Seeing my dad become a little kid around some of his heroes, it was the biggest moment of my life,” said Harvey.

Today, Harvey has worked as a sports journalist and is a fan of the burgundy and gold team he once played for. Nelson and Harvey also discussed the Washington Football Team’s 2021 season and what to expect in the offseason. “Some of the games were exciting, some of the games were depressing, it was up and down rollercoaster, but this [season] was probably the best thing for the team,” said Harvey.

At the start of the WFT’s season, Ryan Fitzpatrick was their starting quarterback but was injured in Week 1’s loss to the Los Angeles Chargers. Taylor Heinicke had to step up and fill in this season as he did last season in the playoffs, but Harvey isn’t sure that he is the long-term answer Washington needs at quarterback. “Heinicke was a good filler. He’s scrappy, he’s a fighter, but there are some fundamental things that he’s done over and over again that you say this is not the guy,” said Harvey.

Harvey believes the best option for Washington would be to acquire a seasoned, veteran quarterback that the coaches can build around. “Tom Brady probably led the way with some of these older quarterbacks who have the talent but are now leaving their teams [and] that want to go to a team that they feel that they can be the man to help turn this team around to win a game,” said Harvey.

Harvey thinks that Washington benefits from a situation similar to the 2020 Buccaneers when Brady stepped in and led the team to a Super Bowl win the season after. “That gives us an advantage because Washington has some talent on their team…you’re missing one or two components…and the quarterback can be one of those,” said Harvey.

Harvey also thinks that depth and the next man up mentality is a key piece to Washington’s potential success. “It’s a different league and different world. When I was playing, you couldn’t go down because the guy behind you was so hungry for your job that he may step in and you’re history. Guys would stay in as long as possible,” said Harvey.

With the resurgence of the pandemic, many teams have lost a significant number of players on a game-to-game basis and have had to sign other players from the street to be able to play their games. “Now because of COVID, because of injuries and all that stuff, guys will go down and if the second guy isn’t prepared to step up and be as good as the first guy, then a lot of teams fall short…good teams have depth,” said Harvey. Several games were postponed in December due to the rise of COVID-19 in the NFL.

Andy Burrows, a loyal supporter and listener of LIWKNN, asked Harvey for his thoughts on Washington’s rebranding. “There are so many great players in the history of the Redskins and it will get forgotten. Hopefully, the team will do a good job in transitioning and still honoring the guys of the past, but you could also get to a point where you forget about the guys of the past because we’re trying to start a new tradition,” said Harvey. After 18 months of being called the Washington Football Team, their new identity will be revealed on 2/2/2022.

Since retiring, Harvey has become an author, screenplay writer, motivational speaker, and contributor to The Washington Post. He recently published “The Caregiver” and is working on another that will be published around the 2022 NFL training camp.

Coming up, Harvey also wants to write a musical about his life for others to be inspired by. “I want them to say ‘Wow anything is possible. Here’s this guy who was lost and by any means would have been, could have been counted out, but this is what he accomplished beyond that’ and if somebody can look at that, read that, or see that, then that is cool.”