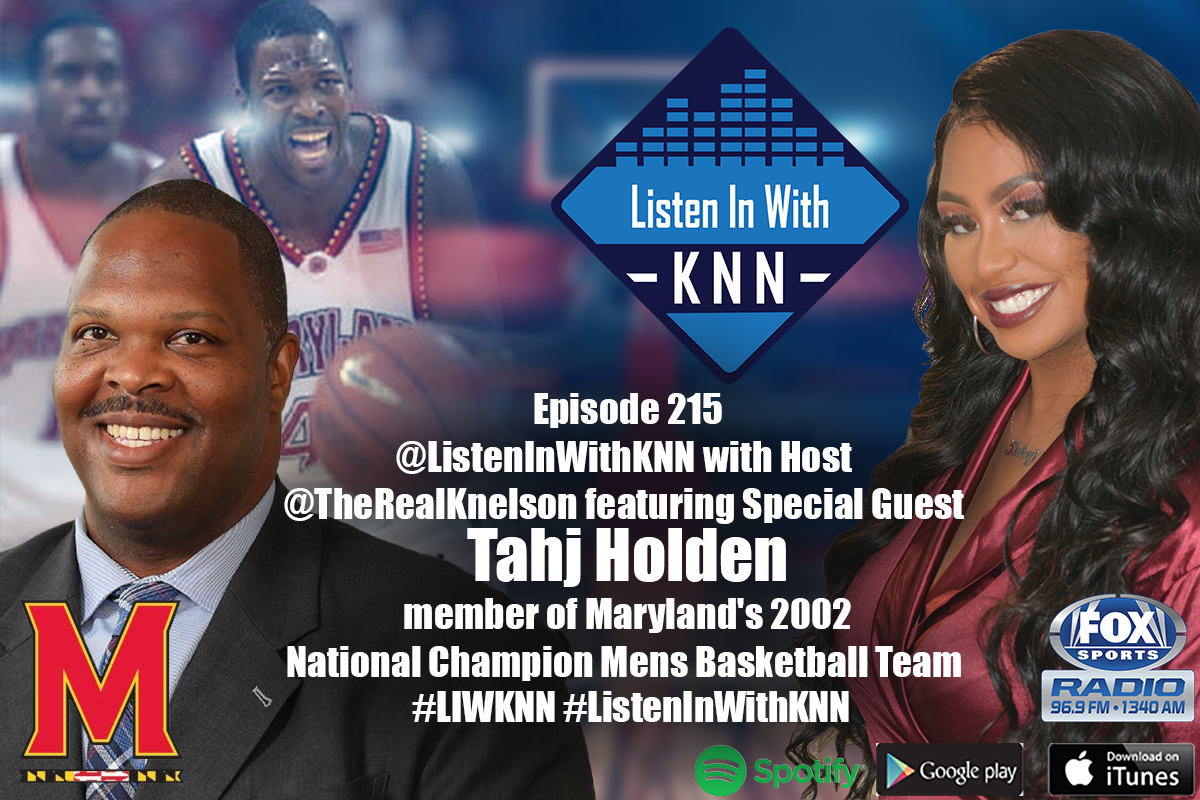 On this special episode of “Listen In With KNN” sports talk radio show and podcast presented by Fox Sports 1340AM/96.9 FM, executive producer and host Kelsey Nicole Nelson welcomed former University of Maryland men’s basketball standout and member of the Maryland men’s 2001-02 National Championship team, Tahj Holden to the show.

Starting off, Nelson notes that Holden was a special guest at the second annual Maryland Sports Business Conference and when asked about it, he complimented current students on playing a big role in organizing the event and wants to give back to the university as much as possible. He also gave credit to the various sports programs and credits the professionalism the university had when he started and how it is now. When asked about what his favorite memory of being on campus was, Holden noted that his favorite memory outside of practices and on-field action was the time he spent with his teammates on and off the court. Pivoting to the 2001-02 National Championship reunion, Holden says it was the first time they were together in 20 years and notes that nothing changed between the teammates and the camaraderie was still there, as if they hadn’t left the university. Later, Holden states that it was almost impossible to get the group together amid the basketball season, as many have other commitments spread out all over the country but was happy that everyone from that team was able to make it.

Before becoming a college basketball champion, Holden grew up in New Jersey. Raised in a single-parent household. An academically and physically gifted student, Holden began to play basketball from grade school to high school. Holden was asked about his time before being recruited and stated that he was not the best but got better as things went along. As his talent progressed, Holden stated his taste of college recruitment was from Michigan State. After visiting Syracuse, Clemson, South Carolina, Holden says Maryland was a fit and credits coach Gary Williams for giving him an opportunity to play right away. When talking about then Coach Williams, Holden says he was passionate and fought for everything, which in turn, gave him and the team motivation to do the same. Additionally, Holden compliments Williams stating that he’s a great man and a great coach, all while having a large influence on himself as a player, and now as a basketball coach.

Holden also emphasizes that in selecting Maryland for college, it allowed for his family to come and visit and watch him play, as it’s not too far from his home state of New Jersey. Holden emphasizes the importance of having his family close by to see him play basketball in-person. Another point Holden highlights about his decision to choose Maryland as the university he would call home are the similarities of the Metro Baltimore/D.C. area being like that of suburban New Jersey and its proximity to New York.

Talking about the recent successes of Maryland athletics in sports like lacrosse and baseball, Holden said that he has been following their progress and states that it’s an exciting time to be a fan of the university’s athletic teams. He highlights the soccer program last season and states that it’s back to where it was when he attended. “It’s a fun time to be on campus!”, said Holden. Going deeper, Holden was asked on his thoughts on the university’s move from the ACC to the Big Ten. Having played in the ACC, Holden says it’s hard to see Maryland not be there, as the university was one of the founding members of the conference back in 1953. In expressing sadness on the move out of the ACC, Holden states that the Big Ten is exciting. He notes that as an athlete playing against some of the nation’s best players, one would love it and overall, makes Maryland better.

Nelson then jumps into Maryland’s men’s basketball’s new head coach Kevin Willard and what his thoughts are on the hire and how things have gone so far. Holden expresses approval for Willard and notes that met the coach in a prior meeting and says he’s a great guy and thinks he’s going to a good job. Holden also notes that Willard and his staff did well in organizing the program, says he does a good job at getting everyone to buy into his style, and states that his recruiting process is going well for the program.

Turning back to the championship game, Holden talks about the prior year in their loss to Duke and said that everyone felt confident enough they’ll be there again in the same spot next season. He notes that the team had already worked on their game during that prior season, and it resulted in improved chemistry the following year. He also added that the team took their lessons from last season and made it all the way to the Final. In using their adversity during games versus Kansas and Indiana, Holden says they took it to their advantage and rallied around to come back. He then goes on to highlight how the team overcame the odds at a time when many people did not expect them to win, and when they finally won, they were able to do what many of their predecessors weren’t able to accomplish.

In discussing Father’s Day, which occurred around the time of the interview, Nelson highlighted a social media post Holden shared regarding pediatric cancer. Holden first talks about how he grew up in a fatherless home and how the holiday did not mean anything to him. He then goes on to note that the meaning of the day changed once he had his first child and how it became important once he began to be called “dad.” Holden then discussed how the day has become a day of reflection and awareness for him, as he lost his son, Maxwell, to cancer. Holden says he uses this instance to raise awareness on the disease and how more money and attention it needs to be given.