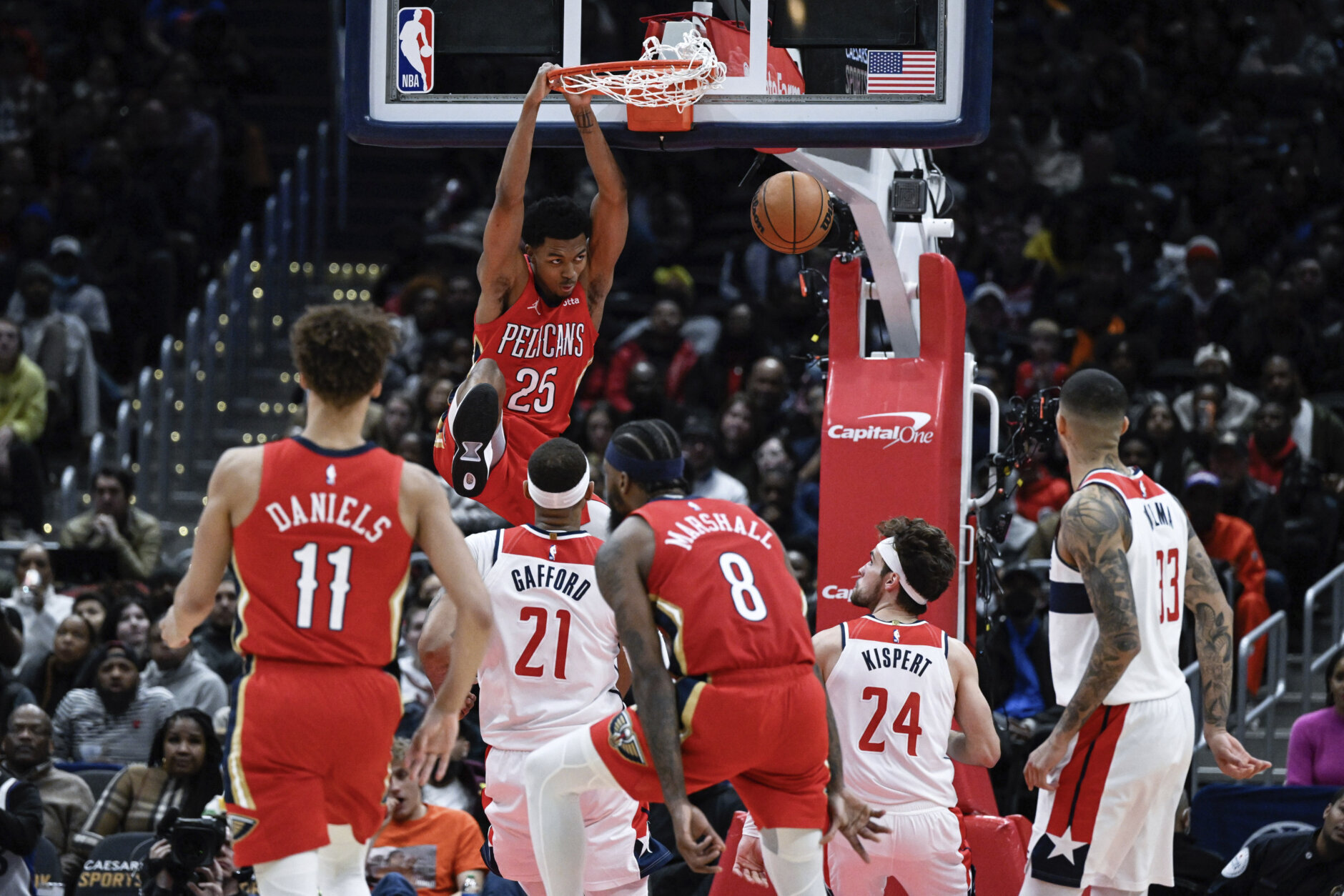 WASHINGTON, DC— After a rough loss on the road to the Oklahoma City Thunder 127-110 last Friday, it didn’t get any better for the Washington Wizards Monday night against the New Orleans Pelicans (25-16)—who were without star players Zion Williamson and Brandon Ingram. The Wizards (17-24) turned the ball over 20 times in a loss to the Pelicans 132-111. After the game, Wizards coach Wes Unseld Jr. spoke to reporters about how the turnovers were a big reason for the loss.

“Thirty-nine points off turnovers, that’s tough to overcome. A lot of them, I thought were just careless and just you know unforced—I thought the vast majority weren’t forced.”

The Wizards weren’t disciplined Monday night. The team played a lot of one-on-one basketball and less ball movement by their two-star players in forwards Kyle Kuzma and Kristaps Porzingis. The two stars had a total of three assists all game. The lack of ball movement made it very easy for the Pelicans to play strong help-side defense and turn the Wizards over. Porzingis describes the Wizards’ performance Monday night.“Ugly game from us. We really couldn’t get going and play as a team. Not our best game.”

Kuzma had a hot start to the game scoring 13 points in the first quarter including going 3/4 from three. However, he was frustrated all night. Kuzma had a technical foul in the second quarter due to flipping the ball at a referee. He also fouled out with nine minutes left in the fourth quarter.

“The foul trouble… frustrated him quite a bit. You know it’s tough. You pick up early fouls; it’s hard to get a rhythm. I can imagine that that’s a little frustrating. We have to count on Kuz to spearhead a lot of our offense. So, I think that was a contributing factor.”

The Wizards started the game on a 10-0 run before Pelicans guard C.J. McCollum decided to go into his bag of shot-making. McCollum had a stretch in the first quarter where he scored eight straight points, keeping the Pelicans in the game. He spoke about weathering the Wizards’ hot start.

“I knew we would be fine. It’s a long game. They’re at home. They are going to come out aggressive. They made shots. We didn’t defend. We didn’t make them feel us at all… As the game progressed, we were better defensively. We were better with our game plans. We got out and ran. We got some easy baskets in transition, and we screened really well.”

McCollum had 22 points in the first half and finished the game with 34 points. McCollum was not alone in putting in work against the Wizards. Wizards’ killer Jonas Valanciunas dropped 27 points and had 12 rebounds last night. In his last four games against the Wizards, he is averaging 23 points and 13 rebounds.

McCollum and Valanciunas had help from a key role player with local swag.

“Anytime you get a chance to play in front of the people that you grew up around, this community you grew up in, and you can go out and perform well and help your team win a game, we definitely encourage it. So, we are extremely proud of Naj and his progression in the league. He has a bright future.”

It’s back to the drawing board for the Wizards. They are on a three-game losing streak and they play the Chicago Bulls, Wednesday night. Star guard Bradley Beal was out Monday, and he’ll probably miss the Bulls game as well. Kuzma and Porzingis will need a smoother and more composed game Wednesday at Capital One Arena for the Wizards to end their three-game losing streak.