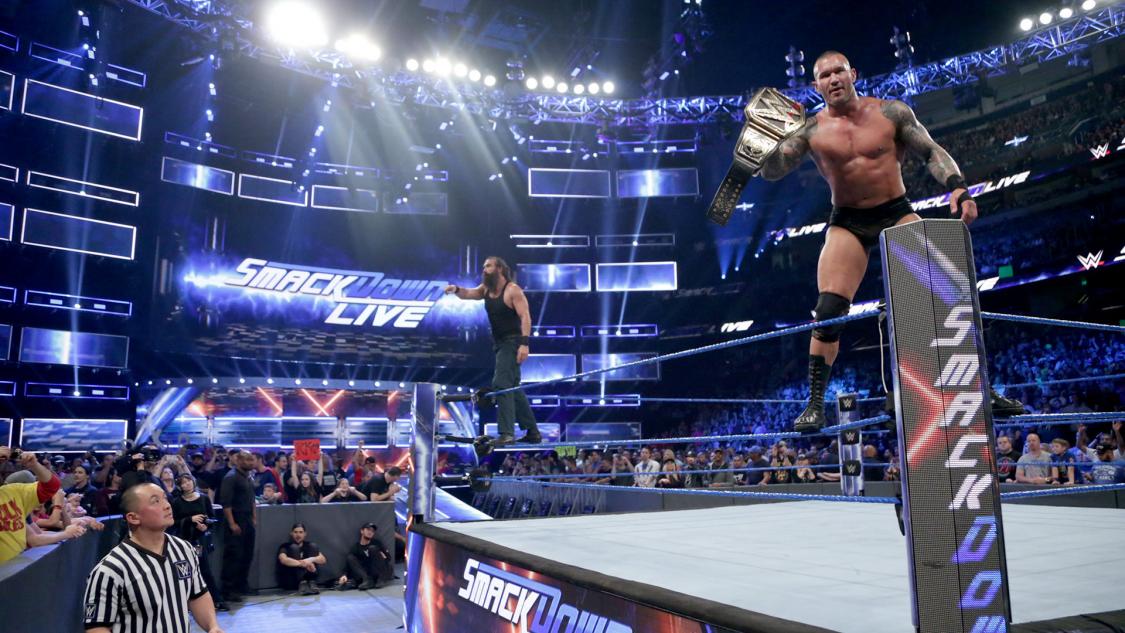 For the first time in History, the WWE had a Live TV show on a Tuesday following WrestleMania. The “After Mania” excitement truly spread into SD Live this week. Like Raw, there were some call-ups, debuts, and power moves.

Many fans did not see the purpose of ending Bray Wyatt’s WWE title reign so quickly. As a result, Randy Orton was booed as he opened the show tonight. Unlike Roman Reigns on Raw, Randy taunted the crowd and gained some true heel heat before his promo. But as Orton started his promo, Wyatt’s eerie sound effects interrupted his segment. Wyatt began to reveal his plans to regain his championship. One of his plans was to face Orton in a Chamber of Horrors match, that will be interesting to see. Orton interrupted and asked for Wyatt to come fight. He did and a fight ensued but Eric Rowan returned and attacked Orton. Leading to Luke Harper helping Orton out.

This was a great segment. The WWE Championship storyline starting the show truly showed how important the title is to the brand.

This was a very physical match. Alexa Bliss proved once again of why she’s a great heel. She dominated most of the match, but she later tapped out. I’m hoping that Naomi has a good reign as champion. Her competitors could change as the SuperStar Shake Up is looming next week.

Poor Curt Hawkins. He left the independent scene as he returned back to the WWE and he hasn’t really been used. Despite this, he gave an open challenge tonight. He wasn’t expecting an opponent that averages a Perfect 10 in everything he does. That’s right, Tye Dillinger debuted on SmackDown Live. He made short work of Hawking in impressive fashion. The future is really bright for Tye Dillinger.

The Miz and Maryse are on a roll. Despite their loss at WrestleMania, they are still telling John Cena and Nikki Bella. They even walked out to the ring in the outfits of their enemies. But as they almost closed their segment, the lights went out and a violinist appeared. Music began to lay and the King of Strong Style made his long awaited debut on the Main Roster. The pop was unreal. The fans sang along to his theme music as he strutted to the ring in his energetic fashion.

If he stays on SmackDown, that would be huge. He will elevate any title he lays his eyes upon and he will bring a lot of international viewership to SmackDown live. Awesome for sure.

Baron Corbin is such a great worker. Dean Ambrose is the same. Both men can really sell their storylines and prove it in the ring. Their street fight proved why. Both competitors took risks and took advantage of the stipulation. Baron Corbin picked up the win with The End of Days.

Unlike many WrestleMania storylines, this feud is still going strong. It could lead to a title change sooner rather than later.

AJ Styles and Shane McMahon talking about the #SuperStarShakeUp pic.twitter.com/n6BjPp61j5

We didn’t really get anything out of this. AJ Styles came out and both men shook hands, that’s it. Shane plugging the Super Star shakeup wasn’t really productive. It was the most relaxed portion of Smackdown Live this week.

Randy Orton and Luke Harper picked up the win in the main event. Bray Wyatt used his supernatural powers and he failed again. He he is the new “Face of Fear” and “Eater of Worlds”, why can’t his character help him win some matches? WWE Creative is really stopping his momentum and the fans are really catching on to it.

Wyatt dissappears from the ring and Randy Orton hits an #RKO on Rowan for the win #SDLiveAfterMania pic.twitter.com/qwnDHDxKQR

It was good to see Erick Rowan return to the fray. It gives Bray Wyatt some protection as he chases the WWE Championship. For Randy Orton, his reign is off to a good start.