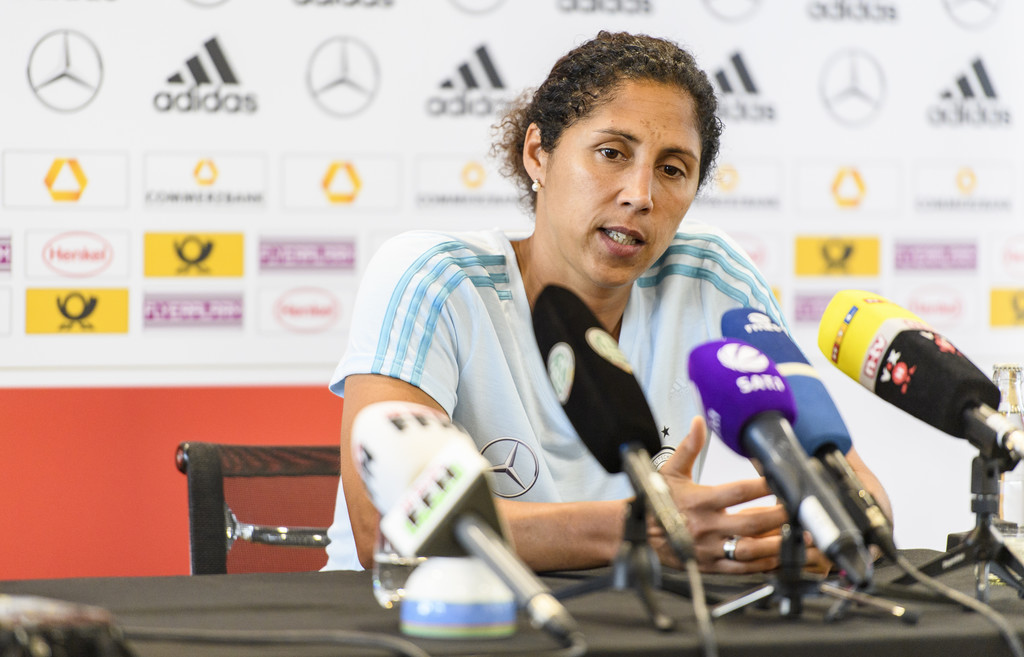 Steffi Jones has continued the dominance of the talented world class force of the Germany Women’s national soccer team in which the motivational German inherited from the widely accomplished Silvia Neid; Jones led Germany to the quarter-finals of the 2017 European Championship and currently has a 64.7% win percentage with 11 wins, three draws and three losses in 17 games as Germany Women’s national soccer team Head Coach.

The large expectations of Steffi Jones mirroring the dominating success of Silvia Neid has not deterred nor overwhelmed Jones, who received a contract extension thereafter the 2017 European Championships; Steffi Jones previously served as Assistant Head Coach to Silvia Neid.

Neid triumphantly claimed gold at the Rio 2016 Olympics as well as the FIFA Women’s World Cup during her successful tenure as Germany Women’s national soccer team Head Coach; Silvia Neid was named FIFA Women’s Coach of the Year in 2010, 2013 and 2016.

Steffi Jones was born in Frankfurt to a German mother and an African-American father and has broken barriers for women’s sport universally in Germany. Jones is also the first-ever Afro-German Head Coach in the history of the Germany Women’s national soccer team.

Germany has over 800,000 Afro-Germans and additionally one of the highest interracial relationship rates in Europe; Hamburg and the vastly multicultural Berlin have the highest population of Afro-Germans in the nation.

Moreover, Steffi Jones is one of the most successful Afro-Germans in Germany and is a woman who has inspired millions of German women to believe and achieve in breaking barriers and stereotypes to succeed in life.

Being one of the most influential Afro-Germans in Germany, Steffi Jones was extremely instrumental in organizing the 2011 FIFA Women’s World Cup in Germany.

Furthermore, Jones came out of the closet as a lesbian in February 2013 and later announced that she was in a registered partnership in June 2014; Jones is an inspiration to many at large in Germany and has been a beacon of hope for Afro-Germans and individuals in the LGBT community in the nation.

Outside of the beautiful game, Steffi Jones has always risen above when the odds have been highly stacked against her. During adolescence, her father left the family in Germany to return to the United States when Jones was a child; Jones’ father was a soldier.

In turn, being raised singularly by her mother alone created many challenges as well as growing up in a troubled area in Frankfurt, Germany.

Steffi Jones’ brothers also weathered adversity with Frank serving as a United States marine in Iraq (Frank lost both of his legs in battle), whereas Christian wrestled with a severe drug dependency.

However, Steffi Jones has always turned a negative into a positive and was awarded with the prestigious Hessian Order of Merit in Germany for her many years of voluntary services as a patron of balance, whilst also receiving the honourable Georg-August Zinn-Preis for her vast contributions.

Sport has invariably been a metaphor in life for Jones and the Die Mannschaft women’s Head Coach will no doubt continue to be an inspiring trailblazer in the ever-growing women’s game for many years to come.

Win, lose or draw, Steffi Jones’ biggest victory is breaking down barriers and opening doors for other powerful women to succeed within the world’s most popular sport.