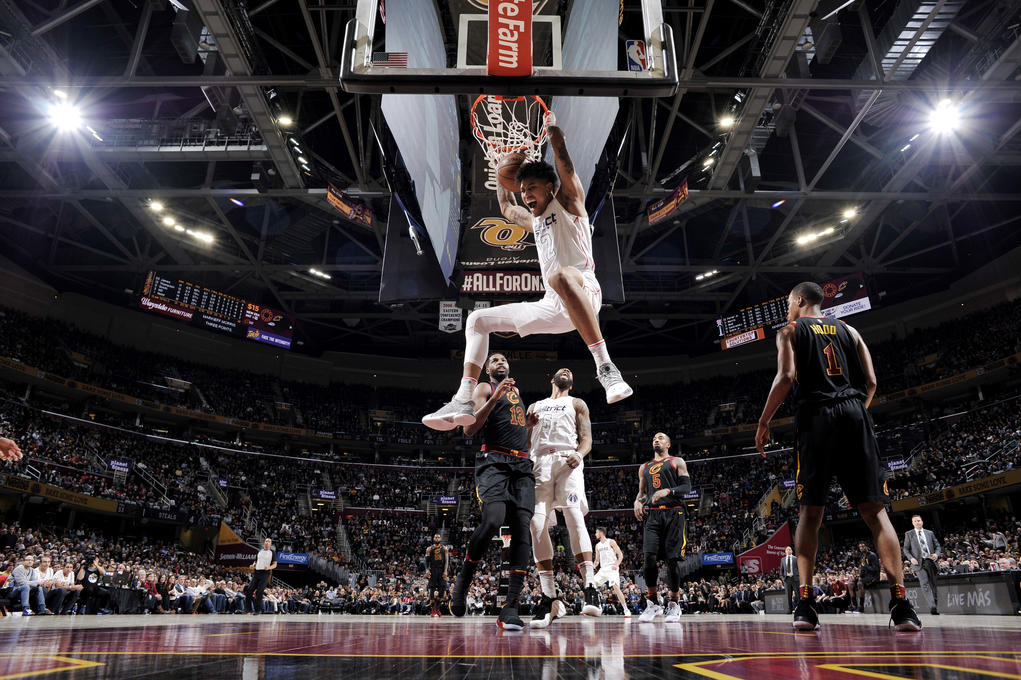 The Washington Wizards took on the Cleveland Cavaliers on Thursday night, in their first game after the All-Star break.

For the Wizards, this was their 10th game without all-star John Wall. Before this game, without Wall, the Wizards have posted a 7-2 record. For Cleveland, this is their first home game since their trade deadline roster shake-up where they acquired Rodney Hood, George Hill, Jordan Clarkson and Larry Nance Jr. (son of Cavalier legend Larry Nance Sr.). Since the trades, Cleveland won both of their games, which were against the Boston Celtics and Oklahoma City Thunder.

The first quarter of this game was mostly led by Cleveland. J.R. Smith started off hot hitting multiple jump shots and scoring 9 points in the quarter, all of which were off of assists from Lebron James. The Wizards were having trouble grabbing rebounds early which aided to Cleveland getting some offensive boards turning into easy second-chance points. After the first, the Wizards trailed 31-22.

#Wiz are losing the rebounding battle early 6-11. Currently down 21-13 #DCFamily

The second quarter was far more generous to Washington. The 3-point attempts began to fall as the Wizards hit five 3-pointers in the last five minutes of the half. This was a part of a 13-1 run that ended up turning what was at one time at 12-point deficit, into a 3-point halftime lead.

The second half saw the Wizards begin to play better defensively creating turnovers and forcing the Cavs to miss shots. For the game, Cleveland shot an abysmal 8-35 (22.8%) from the 3-point line. The Wizards, on the other hand, shot 12-30 (40%) and had 9 steals ultimately causing havoc for Cleveland. The bench really stepped up tonight with 17 points from Kelly Oubre, Ian Mahinmi scoring eight points along with grabbing five rebounds, and Jodie Meeks hit two big time 3-pointers.

In the fourth quarter, the Wizards did a really good job of taking away Cleveland’s role players making LeBron James be the one to have to beat them on his own. In the last nine minutes of the game, no one scored for Cleveland besides James who was outscored by the Wizards 18 to 12. Beal came up big down the stretch scoring on a finger roll with just 28 seconds remaining, extending the Wizards lead to five.

Overall, the Wizards did not flinch when they were shooting poorly in the first quarter. They fought back and got a very solid road win against one of the Eastern Conference’s elite.

“We stayed together and showed a lot of resolve,” Wizards Head Coach Scott Brooks said postgame. “We kept competing and they’re not an easy team to play.”