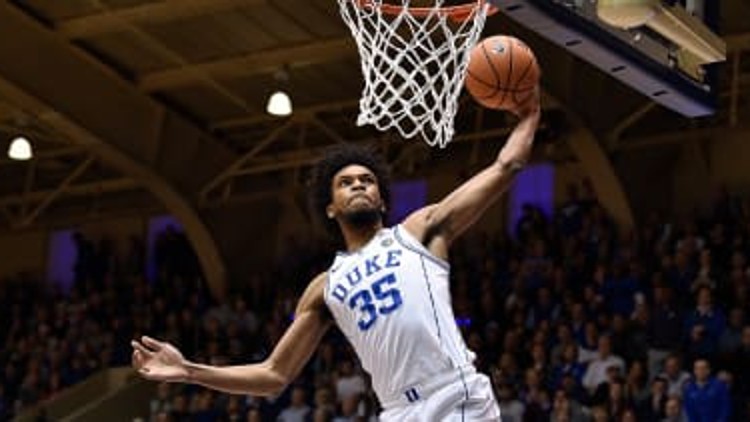 The 2018 March Madness Tournament is upon us. As exciting as this moment is for basketball fans to sit back and enjoy a marathon of basketball for half a month, it’s even more exciting to be able to witness the future stars of the sport.

Whether they’re on your favorite team or not, these ten players will make your time watching the games worthwhile:

Despite the winning and storied tradition of Duke basketball, Marvin Bagley III contributions to this team as freshmen are underrated. His presence in this years tournament will be valuable for the Dukies as they try for their 6th National Championship. Ever since Bagley has hit the court, he has been the X-factor in numerous victories for Duke. The ACC Player of the Year was the second Freshman in ACC history to collect the honor while averaging a Double-Double the whole season, with 21 points per game and 11 rebounds.

The former Mr. Basketball in the state of Florida has flown relativity under the radar this season. However, a successful SEC tournament put him back in the spotlight after helping the John Calipari coached Kentucky Wildcats to their 4th consecutive conference tournament title and a 5th seed in the national tournament. Knox is a projected top 10 pick in NBA Draft expert circles and his ability to help stretch the floor for the Wildcats will be beneficial in their first-round game against the Davidson Wildcats (potentially setting up a 2nd round match-up with the Arizona Wildcats). With his 15 points per game, Knox will play a key role in the Wildcats run to the Final Four.

There’s a lot that can be said about Young, but most importantly “scorer” should be one of them. Some would say his stat line impressed the NCAA tournament selection crew enough that it rewarded Young and his teammates at Oklahoma, a bid in the big dance despite a low-quality performance to end the regular season. Young, the nations leading scorer with 27 points per game and the nation’s top assist man, plans to leave little room for error for critics to decipher as he preps for the NBA. As a freshman, his production for the year has been more than outstanding and his play in the first two rounds probably might be the one we talk about the most after week one of the tourney.

A force to be reckoned with, The seven-footer has been the most dominating big man in the NCAA. While weaving through a federal investigation involving his Head Coach Sean Miller, Dayton’s 23 double-double’s he has recorded helped the Wildcats capture a conference tournament title and a 4-seed in the tournament. A consensus number 1 overall pick, Ayton is must watch TV. Joining the likes of Kevin Love and Shareef Adul-Raheem as the only player to be recognized as both freshman and conference player of the year in Pac 12 history, Dayton is sure to be a great fit for a struggling NBA team in the future. If it just so happens that it’s your NBA team that isn’t having a good year, you might want to get familiar with Dayton while watching these games.

The 6-11 freshman from Harlem, NY is everything you’d want in an interior defender. Ranking 3rd in total blocks on the season, at his age, Mo Bamba has great upside as he prepares to take the next step in his basketball career. Bamba will be needed for the Longhorns to pull off the upset against a Nevada team that is pretty efficient offensively but Bamba has helped his Longhorns play just as well respectively on the defensive end. His season average of 12 points and 10 rebounds kept the Longhorns in the conversation as one of the last four teams to get in the field of 64 and for that, UT fans should be thankful.

Almost every year, there is one charismatic player that consumes the attention of casual basketball fans who tune in every March. In this year’s National Tournament, Collin Sexton is that player. With a strong following since his days in High-School, the former McDonald’s All-American has lived up to the hype. His confidence helped the Alabama Crimson tide pull off stunning upset victories in the SEC tournament and rewarded the team with an 8th seed in the East region bracket. Being named Co-SEC freshmen of the year with averages of 19 points per game and 3 assists it’s not hard to see why Sexton plays with a chip on his shoulder at such a young age and it’ll be needed as they face off against 9th seeded Virginia Tech.

Jalen Brunson, a junior at Villanova has a professional pedigree. His father was a former NBA-Veteran and Brunson’s commitment to the game has paid off well for him even at the collegiate level. Already with one National Championship ring as a member of the 2016 Villanova team, Brunson is looking to lead his team back to the Final Four and cut down the nets. Virtually the team leader, Brunson has doubled his point average since his days as freshmen on the national championship team with 19 points per game and 4 assist. His hard work on the court has placed Villanova back in the championship picture for most prognosticators and he will be a finalist for the John Wooden player of the year award. If he can accomplish one of the two, it will be a job well done for the young man from Lincolnshire, Illinois.

The frontman of the “Huggins Press”, Carter is perhaps the best perimeter defender in the nation. Playing at West Virginia it kind of happens that way tho. A senior Guard, Carter and the Mountaineers have found their way to the dance the past four seasons under legendary coach Bob Huggins. Carter Averages 17 points per game while also placing in the top 5 in steals in the nation. WVU will need Carter to make it difficult from deep in their first round match-up against the hot-handed Murray State Racers.

Bridges was on our list last year as a player to watch in the tournament. Despite high praise from pro scouts his freshmen year, Bridges re-enrolled for his sophomore year at Michigan State. Year 2 for Bridges seemed much like the same tho, as he’s maintained his point average at 16 a game. Bridges and the Spartans are looking to help Head Coach Tom Izzo capture his 2nd national title.

Ever since he was cleared to play since injuring his back in his first collegiate basketball game, fans have been anticipating Michael Porter Jr’s return to the court. There isn’t much a stat line to look at for Porter but his brief 12-point appearance in the SEC tournament last week might give us something to look forward to. Porter was heralded as a lottery pick before injuring his back. With his brother and two sisters both competing for Missouri basketball, if somehow the Mizzou Tigers can stay alive in the tourney, it might give the younger Porter the opportunity to get back in good graces with pro scouts.