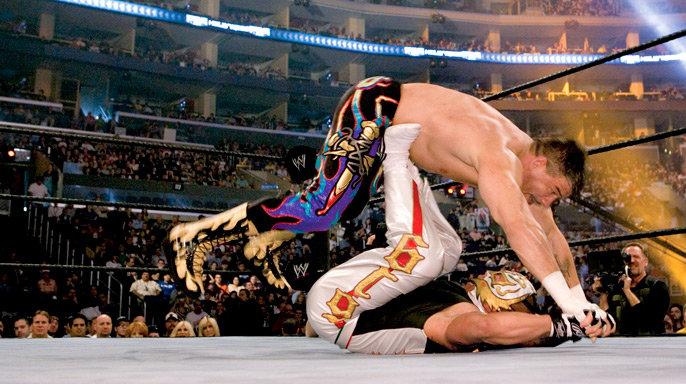 An opening match to any wrestling show is a two-way street.

It means that you’re either not good enough to open a show or good enough to set the tone for a show. It’s up to wrestlers to truly decide how they feel about the reality of opening a show.

In WrestleMania’s history, there have been a few opening matches to truly be remembered over time. Here are the best WrestleMania Opening Matches.

This match was an absolute clinic. In an era for the then WWF where good matches were hard to come by; this match was hard to skip over. It was built as a clash between brothers as Owen Hart crossed his brother Bret in the weeks leading up to the event. Many fans asked if Bret would even strike his brother.

Out of kayfabe, true wrestling fans during this time really knew that both men had good chemistry. It’s obvious of why. They were brothers who claimed to Wrestling fame together. Back in kayfabe, Owen Hart claimed that he was better than Bret and he made a good point during this match. He attacked Bret’s knee and won the match in surprising fashion.

Here’s something to question, Was Owen really better than Bret?

I think he was and this match is a good reason of why.

Many characters could not fit in WWE’s Attitude Era. When LOD 2000 (the Legion of Doom) entered Boston during WM 14’s Tag Team Battle Royal; the place shook. Accompanied by Sunny while wearing biker shorts and newer versions of their famous spiked shoulder pads, LOD quicked had some newly added fierceness.

It wasn’t really the match. It was the sight of the Legion of Doom that connects to most fans.

WrestleMania 17 was loaded. Imagine the pressure that Jericho and Regal had to open this event.

Regal was in his ‘WWF Commissioner” gimmick as a heel. Jericho and Regal had a few moments building up to this match. In the match, both men gave a good performance to a hot crowd as Jericho used Regal’s turnbuckle mistake to his advantage for the win.

John Cena really landed on the scene by winning this match. The sight of him holding the Big Show on his shoulders is a sign everyone will remember from WrestleMania 20. It was his first WrestleMania match and his win launched him to a slow push that led him to the WWE Championship the following year at WrestleMania 21.

This is considered to be one of the best WM opening matches of the modern era. Both men were tag team champions but which was weird, both men wrestled against each other. It led to a forgettable Ladder Match at that year’s SummerSlam but let’s just talk about the match, shall we?

Both men wrestled each other for years in Mexico, WCW, and ECW even before the WWE. Their chemistry was amazing and this match surely showed why.

We all know what happened to Mr.Kennedy; he got buried out the WWE and his career never really was the same again. Now, the winner of this match isn’t really why this match is remembered. It’s remembered because of the loaded slate this matched featured. Mr.Kennedy, CM Punk, Edge, Finlay, Jeff Hardy, King Booker, Randy Orton and Matt Hardy were all in this match. That’s often overshadowed by this move by Jeff Hardy

Ladders would never be used the same after this match.

This has to be the loudest opening match in WrestleMania.

Here’s why: Daniel Bryan was one more win closer to his major title match on a WrestleMania stage. He had to win this match to get his title shot later in the night.

This match was great and Triple H put Bryan over well in a very heated affair.

All jokes aside, getting your first WrestleMania win against a McMahon is a huge accomplishment. Mr.Styles added more prestige to an amazing 2017 by winning this match. Both men fought well and really pulled out the stops for the Orlando crowd.