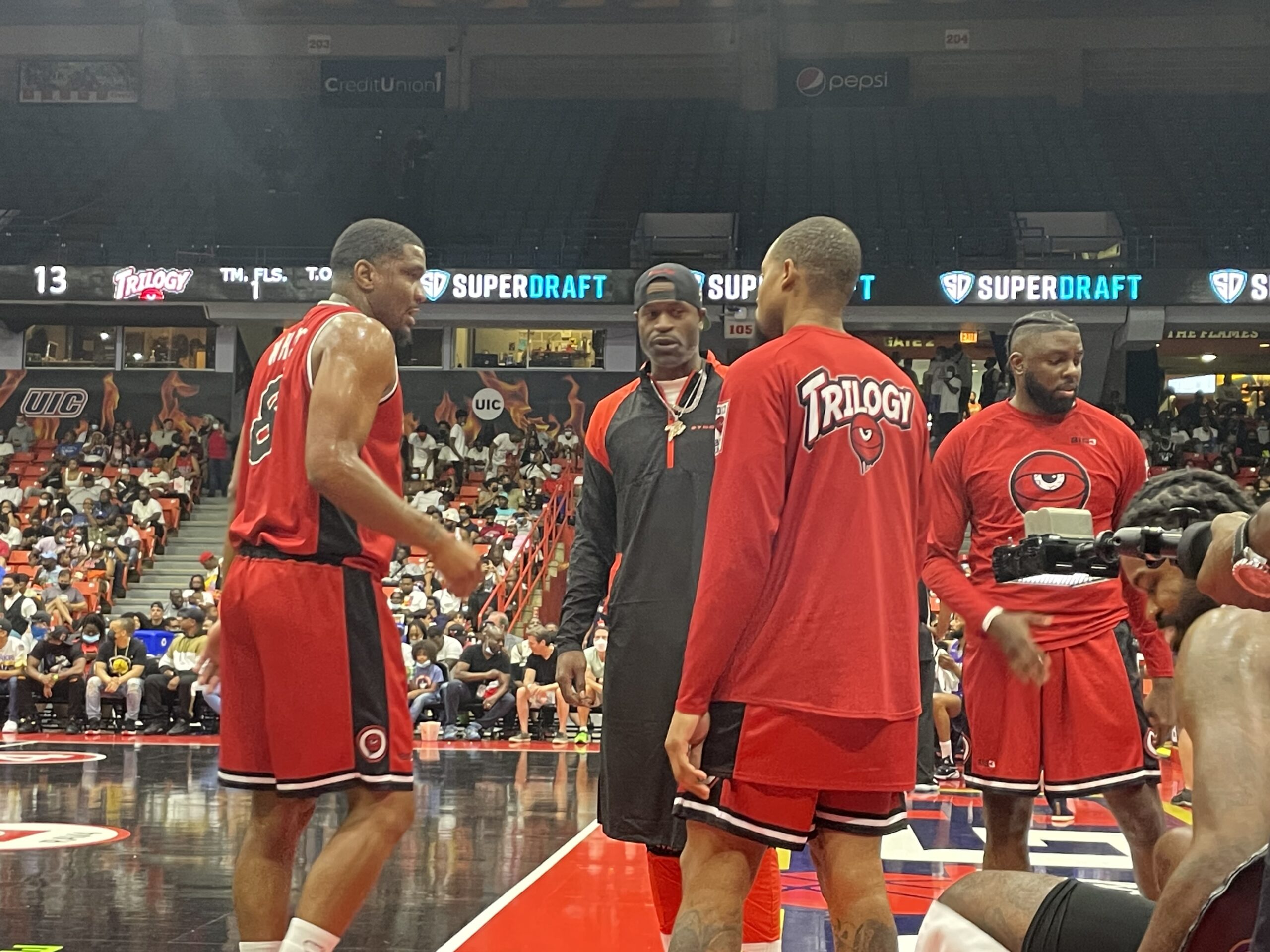 Tre-State withstood a flurry from Ball Hogs’ Leandro Barbosa to come away with a 3-point win.  Barbosa poured in a game-high 25 points and the Hogs got another 18 points from Jodie Meeks.  It wasn’t enough to overcome the balanced Tri-State trio of Earl Clark (20 points, 6 rebounds), Jason Richardson (18 points, 9 rebounds), and Nate Robinson (12 points).  The Hogs were out-rebounded 18-10Both teams came into the week 3-2 but the Hogs were surging with a #3 power ranking, up 5 spots while Tri-State was ranked 7th after dropping 3 spots; this week’s results will change that.

The showdown between Trilogy (3-2) and the Ghost Ballers (4-1) came to the Windy City billed as the Game of the Week – and if Mike Taylor had played, it would’ve been.  Instead the Ghost Ballers had no answer for Jarrett Jack who scored   points and yet another game winner to move Trilogy to 4-2 and undoubtedly a jump in the power rankings.  Taylor tweaked his groin in Thursday’s win over 3’s Company and his presence was sorely missed.  Ricky Davis scored 14 while Alex Scales and Chris Johnson added 10 each in the losing effort.  Jack finished with 24 points while James White contributed 13 points and 8 boards.

Neither team scored the ball particularly well to start the game, leading a longer than average first half.  The return of Glen “Big Baby” Davis to the lineup gave Power the edge on the inside as far as size but it was a balanced Aliens team that rallied from 10 down to take the win.  A four-point dagger by Aliens’ Andre Owens over the outstretched hand of Dusan Bulut gave the Aliens their second win on the season to move to 2-4.  It was Owens’ second straight 4-point game winner.  He poured in 14 points while Jason Maxiell and Greg Oden added 12 each, and Brandon Rush finished with 10 points.  Bulut the Week 5 Player of the Week, scored 15 points while pulling down 9 rebounds.  Derrick Byars added 13 points and 9 boards in the losing effort.  Power was without Royce White and Cuttino Mobley was limited in the second half.  Power drops to 3-3.

The Killer 3’s got off to a smoking start in a rematch of Season 3’s championship game.  Donte Greene, coming of a Week 5 win that saw him score 23 of the Killer 3’s 25 first half points, continued to be on fire.  He poured in 15 first half points as his team took a 25-23 lead into halftime.  The Triplets have overcome a slow start a time or two, but that was not the case today.  Reigning MVP Joe Johnson was held to 17 points while Alan Anderson chipped in 11.  Greene led the Killer 3’s with a game-high 23 points and pulled down 7 rebounds.  Frank Session scored 15 points including the game winner while Josh Powell poured in 10.  The Triplets suffered only their second loss since their entrance into the league in Season 3.  The Killer 3’s seem to be finding their stride as they moved to 4-2 heading into the last two weeks of the regular season.

The Enemies’ struggles continued as they found themselves down early and facing a 12-point deficit going into halftime.  They stormed back in the second half but could’t overcome the strong inside presence of Reggie Evans who finished with 20 points and 14 rebounds. The No. 1 overall draft pick Isaiah Austin was ejected after tossing his goggles and headband in response to an officiating call and that certainly did not do the Enemies any favors.  They were dominated on the boards 25-15; more importantly, the 3 Headed Monsters pulled down 11 offensive rebounds which makes a world of difference in a half court game.  Kevin Murphy and Rashard Lewis scored 17 and 13 points, respectively, in the absence of Mahmoud Abdul-Rauf.  The Enemies were led by Elijah Stewart’s 20 points.  Austin contributed 15 points before his early exit.  The 3 Headed Monsters moved to 4-2 while the Enemies fell to 1-5.

The last game of the day was between two teams at the bottom of the league’s power rankings.  Without last season’s stars Will Bynum and Josh Smith, Bivouac has struggled to find the win column and came into the week with a dismal 0-5 record.  However, they stayed within striking distance of 3’s Company who hasn’t had the most remarkable season themselves.  Behind 19 points and 15 rebounds from Tony Criswell and 14 from Bobby Brown, Bivouac pulled to within four before Drew Gooden hit the game winning basket.  Gooden scored a game-high 22 points while Mario Chalmers added 16 points and 7 assists.  3’s Company moved to 2-4 while Bivouac fell to 0-6.

The Big 3 heads back to Las Vegas for Weeks 7 and 8 to close out the regular season before heading to the Bahamas for the playoffs.