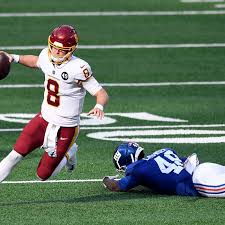 The Washington Football Team took a tough loss to the New York Giants by the score 20-19. Washington played better in certain areas and worse in other areas. The Giants won their first game of the season while Washington dropped to 1-5 on the season. This was a winnable game which slipped through their fingers. Let’s look back at the game.

Defense- With the exception of a few big plays, the defense played a good game. The defense gave up 240 yards and 13 points. That’s winnable stats for any team. Granted the Giants have a very weak offense, the defense still played well. Giants had just scored 34 points last week against the Dallas Cowboys so they had potential. These are the performances that the defense needs.

Sustained Offense- The offense in the second half was able to put together some long drives that rested the defense and wore down the Giants defense as well. After the interception by Kendall Fuller, the offense drove 70 yards on 14 plays for a field goal that took 6:55 off the clock. The next drive was seven plays before the Kyle Allen’s fumble. Then the final drive was ten plays that led to the final touchdown of the game. Those drives allowed the defense to rest which helps both sides.

Kendall Fuller- A lot of the fanbase was upset when Fuller was included in the trade for Alex Smith. Fuller returned to the team this offseason as a free agent and is the best defensive back on the roster. Fuller now leads the team with four interceptions and is a tough and physical cornerback. His ability to play in the slot as well as outside shows his versatility and is a solid player to build upon.

Fade?- Both Washington touchdowns were Kyle Allen passes on fade routes. The favorite route of former coach Jay Gruden, Allen connected on with Logan Thomas in the second quarter and the other to Cam Sims in the fourth quarter. Both were executed in the two minute offense as well. Also it was the first touchdown for Thomas in Washington and Sims’ first NFL touchdown. It was good to see bigger targets getting opportunities in the redzone.

Turnovers- Kyle Allen had an up and down performance. Allen made some good throws on those touchdown passes he had. However Allen had two costly turnovers that hurt the team’s chances of winning the game. His interception in the first quarter gave the Giants the ball on the Washington 27 yard line which the Giants scored a touchdown in three plays. Allen’s fumble while being sacked in the fourth quarter was returned for a touchdown and instead of the ball at midfield the Giants took a seven point lead. That is 14 points directly off of turnovers that is squarely on Allen. Those turnovers don’t happen and Washington would have won the game. So Allen has to step that up otherwise there is no change from Dwayne Haskins.

Big Plays- While the defense was stout most of the afternoon they continue to give up big plays. Washington’s defense came into yesterdays game haven given up eight plays over 40 yards and 4 over 50 yards. The biggest play was a 49 yard zone read keeper but quarterback Daniel Jones that flipped the field. The defense overall played better but has to limit those big plays.

Dustin Hopkins- Hopkins missed another field goal yesterday and has missed one in four of the six games the team has played so far. With the team losing by one point there is the difference in the game right there. There wouldn’t have been a need to go for the two point conversion if that field goal is made. Coach Rivera on Monday said that Hopkins is safe but he needs to be better.

Two Point Conversion- I was not mad at the decision to got for the win with the two point conversion. My issue was the play call that was selected. Washington’s snaps inside the 10 all game were not pretty but Scott Turner’s play selection did not leave many options for Allen. I think he had a chance to run it in but Allen has to give a receiver a chance to catch it. That is exactly what the coaching staff wanted from Haskins so Allen should be held to the same standard.

Injuries- Washington suffered a couple of injuries yesterday to an already thin offense. Left Guard Saahdiq Charles went down on the third play of the game with a dislocated knee cap, and will be out until after the team’s bye. Wide Receivers Antonio Gandy-Golden and Isaiah Wright both had injuries during the game as well. With Stephen Sims already on IR, the receiver corps is very thin including Terry McLaurin who has been battling injuries. The team will need to address this position this week.

NFC East- The Giants got their first win of the season to tie Washington at 1-5 on the season. Philadelphia made a valiant comeback against the Ravens but lost to fall to 1-4-1. The Dallas Cowboys face the Arizona Cardinals with a chance to move to .500 on the season. If the Cowboys lose then Washington, who currently has the 2nd overall pick in next year’s draft, would be playing for first place in the division. The NFC East has seen better days.