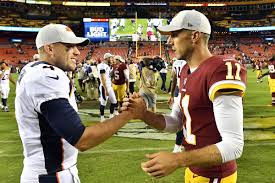 In a trade yesterday, the Washington Redskins traded for veteran quarterback Case Keenum who was under contract with the Denver Broncos. The Redskins send their 6th round draft pick in 2020 while Denver will send their 7th rounder in 2020. Denver also will pay $3.5 million of the $7 million he is owed, while the Redskins will pay the rest which is fully guaranteed. The veteran is expected to compete with Colt McCoy for the starter for the upcoming season.

Keenum was signed last year to the Broncos for a huge contract after having the best season of his career with the Minnesota Vikings the season before. Keenum started all 16 games for the Broncos last season throwing for 3,890 yards, 18 touchdowns and 15 interceptions. Over his career in playing for five franchises Keenum has thrown for 12,661 yards with 64 touchdowns and 42 interceptions. His greatest attribute is probably his health as he as been available for the last two seasons for every game.

This is a good move for the Redskins in the short and long run. The Redskins add a veteran guy to compete with McCoy in the offseason. Both McCoy and Keenum come off the books next season as well. At that point the Redskins should know about the future of Alex Smith. And this move doesn’t preclude the Redskins for trading for Josh Rosen or drafting a QB in this year’s draft. In my opinion for the Redskins, they should draft other positions and keep loading the team with young talent through the draft. While Case Keenum is not the flashiest name, this move is solid and smart move for a franchise that is dealing with the devastating injury to Alex Smith.